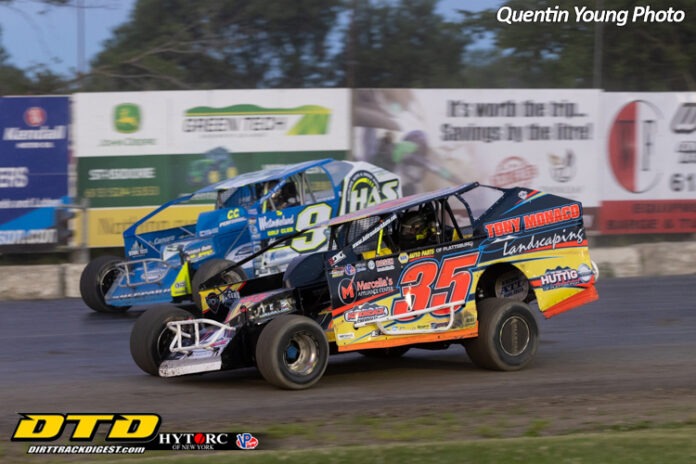 Chris Raabe may have started third in Thursday night’s special at the Cornwall Motor Speedway, but it could have been 13th or even 23rd with how strong his No. 01 was throughout the 75-lap race.

The Alexandria, Ont., pilot has his ride on rails as he held off challenges from both Erick Rudolph and Tim Fuller late to pick-up the win in the opening round of the Canadian big-block Modified Series. It was another big win for the 31-year-old campaigner.

“It just shows that everyone that we have the ability to run with these guys,” he said after beating the likes of Fuller, Rudolph, Mahaney and Sheppard. “Throughout my career we haven’t necessarily had the financing to run big-blocks and stuff like that. That is just the reality of life. You never know, maybe someone will decide to put us in a car someday and we’ll have a lot of fun with them.”

Raabe took full advantage of redrawing at the front to get rolling early.  He passed Carey Terrance for the lead then kept Rudolph at bay in traffic which allowed him to park his RL Racing Engines powered small-block in victory lane.

“I think the big thing with the small-block is you got to get lucky and get in the redraw to get a good pick,” said Raabe during post-race technical inspection. “The first third of the race it is really hard to move, but if you can be in position sometimes it really pays off.”

Raabe’s Bicknell was on point. Even when challenged with a restart with two laps to go with Rudolph and Fuller knocking on the door, he was undeterred as he drove kept them behind him for the last two circuits. He made all the right decisions.

“There was a little bite on the bottom of one so I felt pretty safe, but it was three and four where I had no idea where to go,” he said.  “There was a good middle and the bottom was really tricky to hit. The top had gone away enough. It was a toss-up with the bottom and middle of three and four.  It all worked out.”

Like Raabe, Mahaney elected to run a small-block in his No. 35 Bicknell. He felt like that was the right decision based on expected track conditions Thursday night.

“I figured it was going to be sunny and hot,” stated Mahaney. “You got to look at the weather. I shot myself in the foot a few weeks ago when I didn’t look at the weather and I ran a big small-block at Devils Bowl. Here I think we made the right call and I’m proud of that. We worked some bugs out of the car and had a good night.”

Mahaney started the night behind the proverbial Eightball. Mahaney had some issues in warm-ups which also served as his time-trial laps. He was sixth quick out of eight cars. The team quickly figured out the issue allowing him to make the redraw through the heat race.

“I feel like we started off in a hole because I had trouble with the engine running right in warm-ups and you got to be good right off the bat,” he said. “We were able to climb back through in the heat and started seventh with the redraw.”

He was slow out of the gate in the feature, but the car got better and better as the race went on. It was good enough for him to secure a fourth-place finish in the final rundown.

“In the beginning of the feature I was dropping like crazy,” commented Mahaney. “I was too tight, not enough gear or something. Later on, the track came to me. We got better at the end. I was really racey, but there were to many long runs. I didn’t get enough restarts to kind of catch the field. Those guys were good. We were solid on some of those runs, had some good lap times, but the right rear was chunking out a little bit. We were alright and got a good finish.”

Sheppard was one of only a handful of drivers that elected to utilize a big-block powerplant. Sheppard had problems after his time trial laps getting towed to the pits when the shifter linkage broke. He recovered from a poor starting position in the heat to make the redraw. He then proceeded to redraw 12th. It wasn’t ideal, but he made the most of it to get sixth.

“It was definitely a small-block track tonight and redrawing 12th didn’t do us any favors,” mentioned Sheppard. “We could have been a little bit better too. Starting 12th we knew what we were in for tonight.”

By virtue of the deeper starting position, Sheppard tried some different things with the setup of his Bicknell mount.

For Sheppard, it wasn’t a win, but it got him back to Cornwall for the first time since COVID-19 restrictions were put in place. A small-block was preferred, but he fought for what he could get with his big-block.

“All-in-all, it was nice to get up to Canada and see the fans again,” he said. “I wish the track had a little more grip in it. This place is weird. I can remember coming here five, six, seven years ago when it was hammer down and still getting our ass whooped by small-blocks. The small-blocks just carry so much momentum here. It’s such a bullring, it gets slick in spots and they just don’t give up anything at the apex (of the corner). It is what it is. It is a decent run for us, it’s in one piece and we’ll roll into the weekend.”

Like Sheppard, Mat Williamson elected to go the big-block route. He was off in timed warm-ups and that forced him to fight from the back all night.

“We just unloaded bad, that’s probably on me,” he said. “I didn’t spend enough time going over the car after Orange County. We did a bunch of things to be better on a flat, slippery surface and we came here and it’s short and banked.”

Williamson started 23rd and fought his way up to seventh. He knew the big-block wasn’t really the right choice, but he felt like he needed to get more laps with the bigger powerplant.

“We had a good car there toward the end,” cited Williamson. “We were pushing Matt (Sheppard) across the line. It sucks coming to these sometimes. I won a big-block race with a small-block, so it’s like the pot calling the kettle black. To come to these places running a big-block, we are probably the stupid ones to show up with a big-block, but we need to get better with big-block so it paid off in the end.”

32 cars signed in to race on Thursday night with Raabe, Louis Jackson Jr., Yan Bussiere and Kyle Dingwall claiming the heat race wins. No consolation was run as all cars qualified for the feature…

Dominic Dufault had his night end in the heat race. He showed heavy smoke before exiting the heat early. He did not return…

Francois Bellemare was a late arrival to the speedway. He missed his qualifying heat before making it in time to start the feature…

Luke Whitteker failed to turn a lap after timed warm-ups…

Brian McDonald made hard contact with the safety tires outside of turn four to bring out the final caution of the feature. One of the larger tires bounced down the track doing heavy sheet metal damage Carey Terrance’s No. 66x. He stayed on track and finished fifth while McDonald took his No. 151 to the pits.