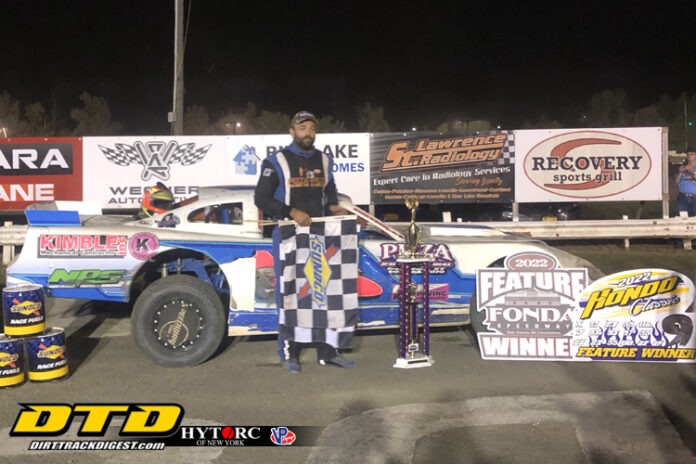 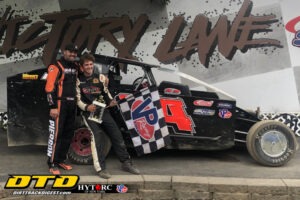 Last week the rains hit Albany-Saratoga five laps into the Limited Sportsman feature making it the first event on the card this week.  The starting field was 28 strong for the    return and at the end of the 20-lap main event there was a first time winner in victory lane.  Ashton Pierson, 17-year-old son of Modified driver, Adam Pierson of East Corinth, Vt., won on an extra money night and picked up $1000.  This is Ashton’s first year behind the wheel of a race car.  His 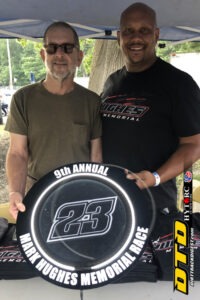 only other racing experience came at age five when he tried go-karts and decided it wasn’t for him.

Friday night Derrick McGrew, Sr., honored his friend, Mark Hughes with a special memorial race for the 602 Sportsman with a special trophy presented to the winner.  We ran into McGrew on the fan side with Mark’s father, David, selling memorial tee shirts.

At the end of the evening and the Mark Hughes Memorial there was another first time winner in victory lane; Tommy D’Angelo, driving his No. 23c and how fitting because Mark Hughes also raced the No. 23 in the Sportsman division at the Malta oval. 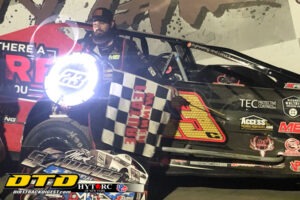 Mark lost his life in a tragic accident in New York City in 2014.

Although Ed says he doesn’t go to the races for the food, it sometimes ends up that way.  Friday night he felt like the racing food critic; first he enjoyed that special sausage and pepper sandwich, later in the night he had a hamburger, followed by a hot dog.  The food is always good and the service courteous and friendly.

Fonda Speedway hosted the 17th annual Hondo Classic bringing out some of the best in Pro Stock racing vying for a chance at some big money.  Beau Ballard went home with much of the money by leading many of the laps and winning the event for the first time in his career, his second win at Fonda.  Added also was the Bob James, BOBCO Dash for Cash, organized by his long time friend, Mark Krosky, and giving six drivers an extra chance at 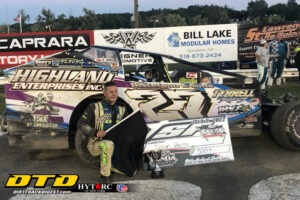 some big money.  Nick Stone was the winner.  The winner received a check for $509, a winner’s banner and a large trophy.

The Sportsman also got their chance at some big money in the first ever Black Flag Challenge and Jason Reome went home with that prize.  The event was organized by Mike Jackson of Swagger Factory Apparel and Scott Friers and proved to be a popular addition to the already fan appreciation night sponsored by Sampson Motor Car.

To add to the festive night, the Town of Fonda chose to have their fireworks display from the speedway infield. 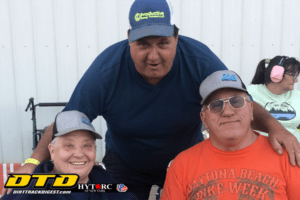 The night at Fonda was truly a champion night; we ran into Don and Diane Champion who were one of the sponsors for the BOBCO Dash, in memory of their son Craig.  Diane has been going through some health issues and was very happy to be at the races. With the Champions was Danny Blythe who was catching up on racing memories.

If you are racing history buffs like us, mark your calendars for Wednesday, July 20 for the 30th annual Hall of Fame inductions ceremonies for the Northeast Dirt Modified Museum and Hall of Fame located in Weedsport, N.Y.  The event is free and open to the public.  There is a “Happy Hour” prior to the 7 pm ceremonies and an After Party in the Weedsport Speedway Pavilion.

Those being honored for the 30th annual event are drivers, Billy Decker, Craig VonDoren and Don June. The Gene DeWitt car owner award will go to Guy Madsen; 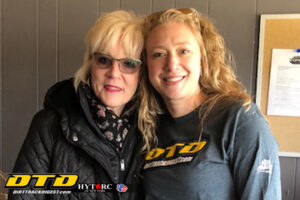 Mechanic/Engineering Award, Eric Mack; Lenard J. Sammons, Jr., Award for Oustanding Contributions to Auto Racing, CVRA Promoter, C. J. Richards; Andew S. Fusco Award for Media Excellence, Photographer, Ace Lane, Jr., and the Outstanding Woman in Racing Award to Melissa “Mimi” Lazzaro.  Mimi has become a favorite at Fonda over the years and has paid her dues as one of the women in racing, currently an announcer in victory lane at Fonda under Brett Deyo, and a commentator on DTDTV broadcasting on Flo Racing and MAVTV.  Mimi is truly her dad’s daughter and is dedicated to the sport that she loves.  Behind the scenes she has always been supported her mom, Shelia.