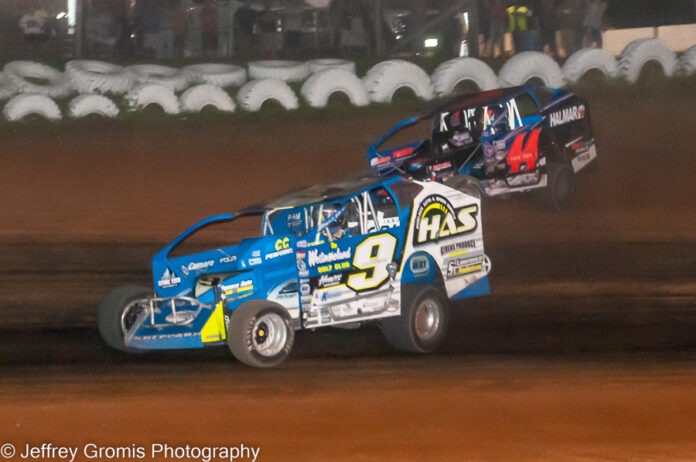 It has been 13 years since the Super DIRTcar series last visited Big Diamond Speedway. There was a race scheduled in 2014, but that was rained out. The names above the doors may have changed, but the competition remains the same. There is also one other thing that remains the same and that is Matt Sheppard. Sheppard has won the SDS title a total of eight times and seems primed to make it championship number nine as he motored to yet another SDS win in coal country. For Sheppard it was his 84th career SDS win and 441st win all-time.

Sheppard started third in the 75-lap “Anthracite Assault” with the front row occupied by Ryan Godown and Matt Stangle. Godown took the lead early on, but Sheppard wasted little time getting by Stangle for the second spot. A lap 11 restart saw Sheppard take the top spot away from Godown. Once in front Sheppard pulled away from the field.

“Yeah, that was a good run for us,” commented Sheppard as the crew was loading up the No. 9s for the trip back to Savannah, N.Y. “It was an unusually uneventful night as well, which is different. The car was good in warmups and good in the heat race. We made a couple of adjustments to the car for the feature, and they worked out for us. We had a really good car, drew a goo number and kept our nose clean. It is nice when a night goes that way, it doesn’t happen very often.”

As Sheppard was leading, it seemed like each time he approached the tail end of the field and hit traffic, the yellow would appear to give him clean track on the restart.

“That was weird, at certain times of the race I felt alright in traffic,” explained Sheppard. “It just seemed like the tires would do a lot of the coming and going. It would get tight, then get loose. I actually felt really good before the last caution and then after the caution if felt really bad. But that is part of long-distance racing, these cars just seem to come and go There is a lot of different stuff going on with these race cars and tires but all in all, I am thankful everything worked out for us.”

During the middle portion of the race, Sheppard seemed to be taking different lines around the 3/8’s mile oval by working the middle to high side in turns one and two but hugging the inside line through turns three and four.

“I thought that the bottom in (turns) three and four was the place to be,” said Sheppard. “One and two had a good lip but it was starting to get too far out, and the bottom was starting to take a little rubber so it was kind of a hit or miss. Then we got into traffic, so I decided to play it a little more conservative and protect the bottom a little bit.”

It seemed that Sheppard had this one in the bag but late in the race traffic started to become a factor and Friesen closed the gap quickly and was right on Sheppard’s back bumper as the race wound down.

“I knew Stew (Friesen) was there and I was afraid if I got off the bottom in one and two, Stewie would be able to force me to the outside going into three and four, and if that happened, I knew I was going to be in trouble so I tried to stay low in case he tried the outside of me so if he did I could trap him on the outside in three and four instead. I don’t know if it ever came to that, but it all worked out for us.

“We didn’t do anything special tonight, just kind of came with the basics. We haven’t been here in a long time, especially with Hoosiers and big-blocks and some nights you hit and some nights you don’t. Tonight, we did. I thought the track was pretty good tonight, obviously it got a little bottom dominant towards the end but that tends to happen in long distance races.”

Friesen forced to settle for second

Starting the feature in the seventh position, Stewart Friesen knew he would have his work cut out for him with the likes of Ryan Godown and Matt Sheppard starting in spots one and three. Friesen was able to work his way through the field and get past Godown during the middle portion of the race and then set his sights on the leader Sheppard.

Sheppard was able to keep Friesen a safe distance behind him despite a couple of yellow flags that allowed Friesen to close up to the leader. Late in the race, traffic became the big equalizer as it allowed Friesen to close in quickly on Sheppard. However, Sheppard worked the lapped traffic to his advantage thus never giving Friesen a chance to make a pass forcing the Sprakers, NY driver to settle for a second-place finish.

“My Halmar team gave me a good car,” said Friesen after the race. “Matt (Sheppard) had a little better starting spot, although I don’t know if that would have made a difference. We are getting there; we have been top five almost every race. We haven’t been running as aggressive of a schedule as we have, which is good, it gives Tommy (crew chief Tommy Conroy) a little break. It was another good podium finish for us on the series. The track was good, but it got a little bit to be one lane there at the end.”

Sometimes lapped cars work to the leader’s advantage and sometimes they can be a detriment. Lapped cars gave Friesen a chance for the win at the end, but it wasn’t quite enough.

“I thought we had a chance there with the lapped cars,” explained Friesen. “Then two of them pulled off right in front of Matt and I wish they would’ve stayed out there and muddled Matt up a little bit, but it is what it is. Sometimes it works out for you like it did a few weeks ago at Fonda when I got a few timely cautions to keep Matt behind me and sometimes it doesn’t. We could keep pace with him but he was just a little bit better tonight.”

Although Friesen had to settle for second, it was a triumphant return to Big Diamond for him as the last Friesen race here he ended up on his roof in turn one.

“It was a heckuva lot better finish than I had the last time here when I flipped, that’s for sure,” mentioned Friesen. “I don’t think I have had a good race here since 2011 so I will take a second. It was good to be back at Big Diamond for a series race here have a good fan turnout even though it was a rain date.”

Another race, another podium finish for Godown

Drivers will sometimes tell you that starting on the pole is not always the best spot to be mostly because down is the only to go if you don’t win. Last night at Big Diamond Speedway, Ryan Godown was the last driver to draw for his starting spot and the only pill left in the bucket was the pole. Godown led the first ten laps of the 75-lap feature until Matt Sheppard passed him for the lead. Eventually Godown would lose the second spot to Friesen. After swapping spots with Matt Stangle on a pair of restarts, Godown would hold off a late race charge from Alex Yankowski to finish in third.

“It was a good night, we just got this motor in the car, and we are trying to get it dialed in perfect,” explained Godown. “Racing the cars here with Hoosiers is different, it seems like everywhere you go the Hoosier tires feel different. We had to adjust the car a little bit after the heat and I think we just went a little bit the wrong way for the feature. I knew I was too good too early, so you just put it in your notebook and go forward.”

“I am not going to squawk about finishing third to Matt (Sheppard) and Stew (Friesen). I feel like out team is good enough to deal with those guys and towards the end I thought we were closer than we were in the beginning, but I just couldn’t get enough grip in the center of the corner. Just couldn’t find the perfect balance that we were looking for.”

Due to having to use the Wednesday rain date, Billy Pauch Jr and Rick Laubach were unable to attend due to other commitments…

Duane Howard and Craig Von Dohren, who happen to be the drivers with the most career wins at Big Diamond Speedway, did not have big-blocks available for use and thus unable to race…

Texting with promoter Jake Smulley this morning, it seemed like everything moved along nicely last night and both he and DIRTcar officials were pleased with how the night went…

With his win last night, Sheppard extended his points lead in the battle for the 2022 SDS Championship. Max McLaughlin who was second going into last night’s race had a rough night as he hit the wall early in the main event ending his night…