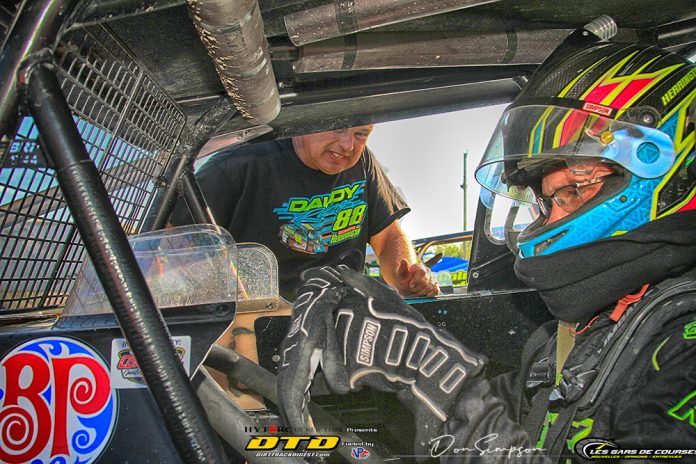 The points battle at the Brockville Ontario Speedway (BOS) is once again heating up between Bobby Herrington and Jessica Power as the two veteran drivers try and set their mark on who will be champion in 2022.

As in 2021, they both fought hard through the entire season with Dylan Kirkland also in the mix. Things between Team Power and Team Herrington are much the same this season, with each team having multiple wins at the BOS.

Herrington is having a strong year, similar to last year, and the season has barely passed its halfway point. 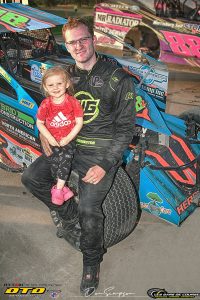 Herrington now has three victories for the year after picking up another Feature win this past weekend.

The 30-year Herrington has set his eye on repeating his championship in 2022 and is currently leading in the points at the Bull Ring.

But this will to succeed stemmed from a lifetime spent in a racing environment with family and friends.
The old Kingston Speedway is not far from the family homestead, and Bobby’s father Randy actually competed at the Kingston track for a single season.

Bobby started racing 23 years ago, he took the initial steps toward where he is today in the sport racing Karts. He switched to the Sportsman Modified class in 2005 and competed in this class for a brief period of time at his home track in Brockville.

A change in direction was desired after competing on clay in the 358 division for more than ten years, and this became apparent in late 2019. the team Purchased an Asphalt Modified and was looking forward to this new challenge. 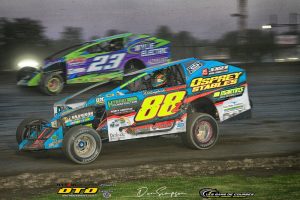 With a new direction and plan, the team was on track, but COVID hit. Things came to a halt, with borders closed and restrictions in place, and no racing to be had. The big question was, how do we get back to racing?

The way to returning to dirt-track racing opened up in late 2020 when Herrington accepted Dan and Kim Dawdy’s invitation to race their Sportsman Modified car. Dan and Kim have been Herrington’s long-time friends and customers, and it just seemed like a natural fit for the two race camps to work together.

Last year got off to a poor start because of all the health regulations put in place as a result of the pandemic. But once the cars were back on the track, Herrington set the standard high by winning the team’s inaugural race despite starting at the back of the field due to his handicap.

From that point on, the team had a great season in 2021, winning the following four races straight. The team then raced their way to victory lane at the season’s final points night race securing the 2021 track championship as well.

Dan Dawdy said, “Last year was an amazing year, where everything fell into place. Kim and I try to give Bob whatever he needs to make the car as fast as possible and are very proud of his efforts.”

As we pass the halfway point of the season, the team’s efforts are bearing fruit once more in spades as Herrington has collected eight top-three finishes, three of which were feature victories.

“I think we have one of the best drivers and crew, and we are all working hard at putting together the best car possible every week. Kim and I try to give Bob whatever he needs to win,” Dan explained.

Herrington prefers to take each race at a time, even though this season’s results are so far looking promising since you can never be too sure and the difference between this season and the previous is much greater.

“It’s tough to compare results between this year and last year because last year was a heads-up format every week. It’s one thing to win from the first couple rows, it’s a whole different deal to start in the back half of the field and win. That being said, we knew that going in and as a team, we are enjoying the opportunity to learn and be better,” Herrington said.

As the second half of the season gets underway, Herrington and his team have built a very modest lead in the standings. The crew is aware that anything can happen at any time, therefore, it is even more important that they concentrate on the specifics. Fortunately, this team has done this before and are aware of the requirements for success.