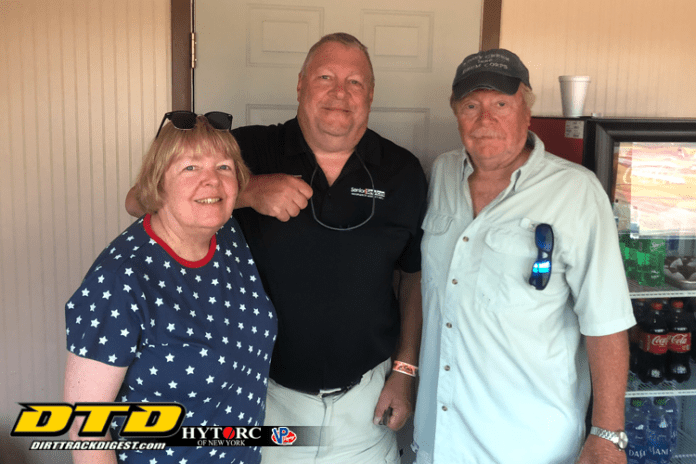 A race weekend that looked like a four day advantage, turned into a Thursday night at Utica-Rome and the remainder of the weekend was recliner racing on Flo. 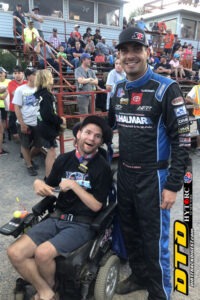 Thursday was the Richie Evans Remembered event at Utica-Rome and we were invited to the VIP tower by Gene and Gloria Cole where we were introduced to three pioneers of the track that was owned by their father, Dick Waterman.  Dick’s daughter, Susan and sons Richard and Jeff all fondly remember growing up at the speedway and they had many questions about former racers that they had watched over the years when their dad owned the track.  And they especially remembered seeing Richie Evans race on many occasions.

Over the years we have seen many ways drivers draw for their starting positions and one popular way is for the driver to pick a fan to draw for them.  On Thursday night, Stewart Friesen picked one of his most avid fans, Garrett and after Garrett picked both he and Stewart had a big smile on their faces because of the number five he drew for Stewart’s staring spot in the feature.  We spoke with Garrett and his mom later and she said that Stewart is a real hero to Garrett and when Stewart’s around Garrett’s smile never leaves his face.

It was a great night and we saw many long time friends.  Fred Voorhees and his wife, were 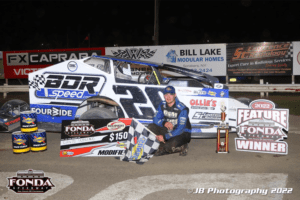 on hand to show some of the work that the Auto Racing Research Association (ARRA) is doing on their very popular website.  The group of dedicated auto racing historians is documenting the history of drivers and race tracks, and is a fabulous tool for anyone looking for information on our sport.  Ed is a proud contributor to this group of dedicated individuals who work tirelessly to record the history of auto racing and its many heroes.

Now here is a bit of Fonda Speedway history. The track has been running continuously 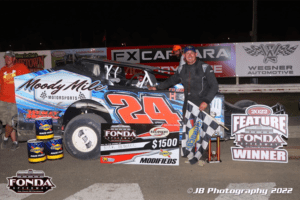 since 1953 and like many early tracks, they ran Sportsman that later became Modifieds but until 1970 there were no double feature events at Fonda.  That year the track held double features for nearly an entire season.  The trend has continued intermittently for 24 different years.  On many occasions their would be a first time winner in one of the double features but in our search we could only find one time that there was two, first time winners on double feature night and that was this past Saturday night when Nick Heywood and David Schilling each stood on Fonda’s famous checkerboard square to celebrate their first career win at the Track of Champions and etch their names in the Fonda Speedway history book. 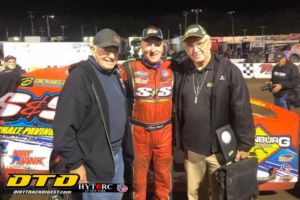 News from New England Antique Racers (NEAR) announcing the 2022 Hall of Fame class to be inducted on Sunday, October 30, 2022 lists Kenny Tremont, Jr., as one of the inductees along with Matt Buckler, Nat Chiavettone, Dick Houlihan, Phil Rondear, and Russ Stoehr. 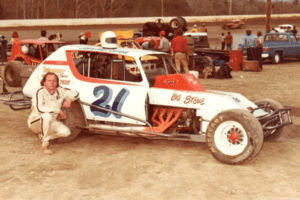 Sad news came this week when we learned of the passing of John Lutes, Sr. a longtime racer in the Northeast and second in a four generation family of racers.