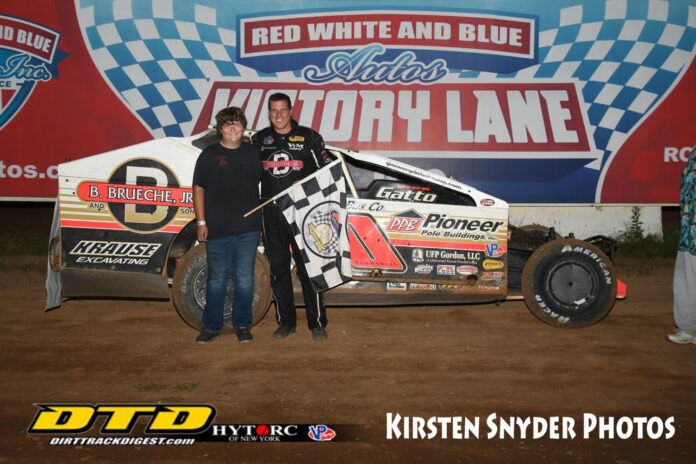 We all know that Craig Von Dohren is a superstar on the PA Small Block circuit. Von Dohren is the all-time wins leader at both Big Diamond and Grandview with 102 (BD) and 132 (GV) respectively. But unless you are an old-timer (like me), most people don’t realize that Von Dohren has won many races at tracks other than Big Diamond and Grandview. With Von Dohren’s wins this weekend at both Big Diamond and Grandview, his career win total now stands at 357. Those wins have come at many different tracks including Bridgeport (32), Susquehanna/BAPS (24), Penn National (18), East Windsor (15), Delaware International (15), Georgetown (9), Hagerstown (4), Williams Grove (3) and one win each at JAX Raceway, Port Royal and Volusia. It has been quite a career for the driver out of Oley, PA.

Wednesday night in Weedsport, N.Y., Von Dohren was recognized for his career achievements while being inducted into the DIRT Motorsports Hall of Fame. It was a great recognition of his career which is not over by any stretch of the imagination.

“I feel very honored to have been inducted into the Hall of Fame,” said a happy Von Dohren. “I was sitting there next to Billy Decker who I have looked up to and wondering how I am here being inducted alongside him. It was a premiere event, and it quite hasn’t all sunk in yet but like I said earlier, it will mean more to me in the upcoming years. I am not big on that hype stuff, but I do appreciate but it will mean more to me in fifteen years than it did on Wednesday night.”

Von Dohren as is his personality, played down the honor but it is quite an accomplishment for an old farm boy from Oley, Pa., and an honor that shows how far smarts and determination can take a person.

“It does make you humble; we have been through a lot over the years as has everyone else,” mentioned Von Dohren. “I am getting older and am slowing down some and now we just want to make sure we have our weekend stuff right and ready to go. We have good stuff and I have always been grateful for having good cars to race.”

Friday night at Big Diamond, Von Dohren was able to take the lead early in the race and seemed to be car to beat but the always exciting Brett Kressley was able to wrestle the lead away from Von Dohren on a restart and looked to have the race in hand. But like a true veteran, CVD never gave up and kept digging and with a handful of laps to go started to move back in on Kressley and pressure him for the lead.

“The top was definitely better on the restarts, but I didn’t feel comfortable up there,” explained Von Dohren. “Towards the end there I could see he was starting to free up and back up to me a little bit. Then the lapped cars came into play and in racing you never know what can happen. I have lost races that way before but tonight it played into my hands. Even after I got by Brett, the No. 15 car was running in the middle going down the backstretch and I didn’t know what he was going to do so I gave him a little tap there and was able to get by him but I didn’t know if Brett (Kressley) was going to go balls to the wall on the outside there or just wait to see if I was going to make a mistake. We held on and it was a great way to get our weekend started.”

“Unfortunately, we have had motor troubles this year with Dave’s car,” commented Von Dohren. “We just got the motor back on Thursday and because we had so much stuff going on plus with the heat and not having the help available until Friday morning it was just too much. We will have Dave’s car back here next week; the motor is fresh, and the car is fresh and realistically it is a twin to everything we have. Just the numbers are different. Looking forward to getting back here next Friday.”

“Our cars are all good, we have been good pretty much everywhere we have run. Our Saturday program is going well so hopefully we can double down tomorrow night and stay aggressive. I think I have kind of figured out what I need to do as a driver to get us through, but I don’t know if that’s enough anymore because everybody else has good cars also. It’s all about getting up on the wheel and making it happen.”

Author’s Note: Von Dohren did keep it going as he was the winner on Saturday night at the Grandview Speedway.

Shawn Fitzpatrick drove his own T102 normally piloted by Ryan Watt on Fridays. Fitzpatrick was making a big move on the outside on a restart when cars tangled in front of him resulting in Fitzpatrick launching over the right front wheel of Kevin Beach Jr. The end result saw Fitzpatrick launching into the air and hitting the large yuke tires off the backstretch which catapulted him back towards the track and flipping hard. Thankfully Fitzpatrick and all drivers involved were okay…

Points leader Duane Howard was also involved in the same accident which saw him facing backwards on the track when the red was displayed. Howard was able to continue and worked his way back up to a fourth-place finish…

The big three in the Crate 602 Sportsman Danny Buccafusca, Brandon Edgar and Logan Watt continue to dominate the division on a weekly basis. These three drivers are the top three in Crate 602 points and have all finished in the top three the past two weeks with Buccafusca taking the win on Friday night…