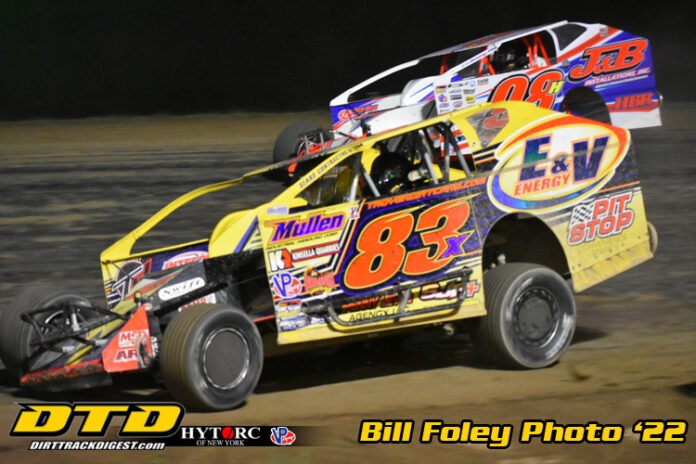 As soon as winner Larry Wight exited his car he headed to the hauler next door, walked in and apologized to his best friend Chris Hile.

Hile and Wight are locked in a tooth and nail battle for the track title and entering Friday night Chris had a narrow lead. However, at the end of the night Larry was on top.

However, Larry wasn’t overjoyed as he told DTD, “It is a bitter win.”

At the start the tale of the night unfolded.

Larry explained, “It was a slow start and it was so slow we were nearly stalling out. There was some brake checking going on and Tom Sears got into the rear end of Tim Sears who got me and I hit Chris.”

Chris was the lone victim as he went nose first into a yuke tire and then went to the 25th starting position on the restart.

Larry called the win “bitter” and noted, “The last person I want to get in to is Chris. We have run the same all year and thus start near each other every week. He is my best friend. I was in his wedding and he was in mine.”

It appeared a run away for Wight, but in the closing lap Tim Sears Jr. roared to life.

However, Larry said, “I heard Timmer behind me, but was able to beat him to the line.”

Tim Sears Jr. trailed by quite a distance in the closing stages of the 35 lapper, but at the line there he was just two-tenths of a second behind winner Wight.

Sears said, “We were so close, yet so far. We probably made up three or four cars on the last lap. He was further ahead and he just outdrove me.”

Continuing, he said, “Larry beat us to the front and got to the clean air first.”

Sears sits third in points at the track, but over at Fulton, with his 358, he is contending for the title.

However, his run took a slight hit last week as he aid, “Right now we are second in points there. We broke last week and that hurt. We went from 15th to third, but on a restart the thru shaft on the rear end broke. That gives Marcuccilli the point lead (512-511).”

Jeff Taylor was leading his heat when suddenly he slowed between three and four and stopped on the frontstretch.

Suddenly all of the fire equipment was rolling and the 11T was surrounded. Extinguishers were unleashed.

Jeff said, “The dash caught fire and burned up all of the wiring.”

However, when the feature came out there was Taylor.

Jeff explained, “Sean Beardsley let us borrow a MSD box and somehow Gordy (Button) got it rewired. I thought for sure we were done.”

A week ago after hot laps the 27Z of Dylan Zacharias was locked in the trailer. The night was over as they just couldn’t keep the engine running.

Zacharias has been working to solve the issue, but on Friday night he noted, “We took our small-block for Brewerton with plans of just trying to keep our handicap in decent shape for the next week, but instead ended up having a solid night. Ended up eighth around some good competition and collected the Small Block bonus.”

In Modified feature action there was a melee in turn one. Tom Sears Jr. got turned around on the low side and Tim Murphy got around. On the top side Tim Harris either was escaping or headed to the pits and got rear ended by Max Hill.

It was a lengthy delay as Max explained, “I got into Harris pretty hard and thought the car was toast. It turns out the front bumper took that damage. So I had to rush to get my belts back on and stuff. However, I couldn’t get my steering wheel from the deck and since none of the safety crew would come over my dad jumped on the track to get it. Hence, the red flag. Obviously we both know that is not allowed, but dad was trying to help get me moving.”

Last week as Jim Witko thrashed on the front end of his heavily damaged 24 he said, “I won’t be back next week.”

Witko has probably not missed more than a handful of shows in several years. However, he found himself going into the first turn during previous week heat action with no brakes.

He said, “It was probably the failure 39 cent part that caused this.”

Jim hammered the bank in one, standing the car on its nose and nearly stood it straight up. The rear end came down hard and he said, “It was probably the hardest crash I’ve ever had.”

Heavy damage to the front end was sustained as Witko, who nearly missed the night as he was recovering from COVID, worked by himself (as he didn’t want anyone around him) and said, “I probably should have stayed in bed.”

Jim and wife Barb are the entire team of the Clark Summit, Pa., based car and they are what grassroots racing is all about.

Notes: Jackson Gill continues to impress. He is really getting the handle in this Big Block and came home fourth. Mid-race he was as high as second…Jimmy Phelps went from 13th to third with another steady run while his teammate Max McLaughlin finished fifth… Chad Phelps sustained extensive rear end damage as he got involved in a backstretch wreck late in the main. Chad said, “I got hit really hard, broke the left tube, axle and ruined a shock…J.J. Courcy won his heat by just four tenths of a second over Larry Wight as Courcy had his new car on a rail. Chris Hile edged out Adam Roberts in heat two and Tim Sears Jr. raced past Jackson Gill for the final heat win for 25 Modifieds in action…In the Sportsman division Alan Fink and Amy Holland was battling for the track crown, but Holland suffered a flat in her heat and did not finish. At the end of the night it wasn’t a total loss as Fink finished eighth and Holland ninth…Matt Caprara in a nailbiter, thriller defeated Dale Caswell by three tenths of a second and third place Cody Manitta was a half second behind the leader…Earl Rudy had one of his best runs of the year finishing in fourth…Joe Isabelle and Kyle Demo were side-by-side battling for the lead on the final lap as the duo raced between three and four. A millisecond later Demo was sitting facing the wrong way and his chance to win ended up ninth…Fans need to thank the drivers and crews for their dedication as Tim Sears Jr., Larry Wight, Max McLaughlin and Jimmy Phelps were all at Orange County for the Super DIRTcar show on Thursday. They arrived back in Central New York around three o’clock on Friday morning and there they were at Brewerton on Friday night.