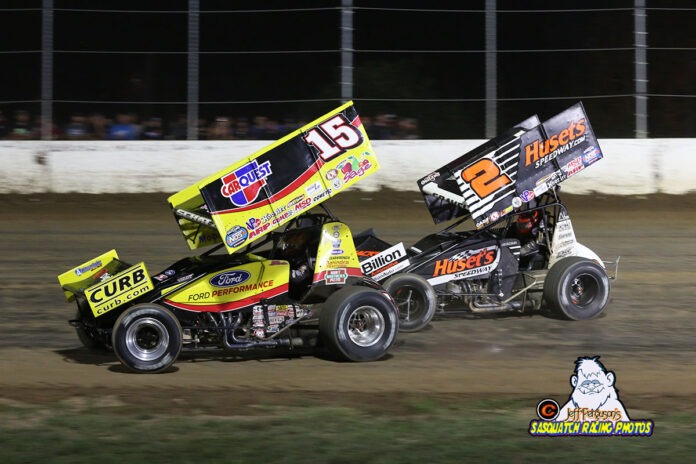 Twenty-nine Sprints and 31 358’s pulled into the Weedsport Speedway on Saturday for day one of a twin doubleheader weekend.

This is the lone New York State visit in 2022 by the World of Outlaws and even Donny Schatz admitted he enjoyed the variety of tracks that they use to run in the Empire State. However, it’s down to one so if fans want to see the best of the best this is their only shot.

And fans turned out in droves as a huge grandstand prepared for the show. With the additional video and information on the big screen, some of the best concession food in the Northeast, and the drivers who they wanted to see on the track it was eventually to prove to be an interesting and enjoyable night.

Anyone familiar with Weedsport knows the place can dry out and by feature time it was just what those guys who brought their 360’s wanted it to be.

However, there is simply no stopping the likes of winner David Gravel who simply had the field covered.

Schatz finished second and led in the early going. He’s had a relatively disappointing last couple of years and even if you aren’t a fan of his it  was enjoyable to see him running up front again.

Time trials saw only one burp as Joe Trenca spun his 98 coming off the fourth turn on his first timed lap. Other than that, it was an Outlaw dominated session with Carson Macedo, Shedon Haudenschild, Donny Schatz, Jacob Allen, David Gravel, Brad Sweet, Brock Zearfoss, Noah Gass and Spencer Bayston the top nine.

Paulie Colagiovanni timed tenth and eventually worked his way to third in the feature with a solid crowd pleasing drive.

Chris Hile, in his first ever Sprint race, timed in 12th in the 29 car field.

Kasey Kahne was 13th and non-Outlaws in the top 20 were Danny Varin, Jordan Thomas, Matt Farnham, and Davey Franek.

Larry Wight had a disappointing 23rd and thus was forced to play catch up all night long. In the end he earned hard charger with a solid 7th and the first 360 across the line.

In time trials Danny Varin was throwing a ton of smoke off the right side, but his crew said it wasn’t an issue as they went to work changing rear end gears and going to bars.

Heat action was relatively uneventful for the Sprints with the most exciting pass coming off of turn four in the final lap as Hile went outside of Dave Axton to get the sixth and final qualifying spot.

With the Outlaws format the feature is pretty much determined by the dash and with Gravel and Schatz on the front row. Well you know the story.

Brock Zearfoss probably wasn’t too happy and had the adrenalin pumping for the last chance race. He had qualified in his heat, but due to hitting the cone on the front stretch during a restart he was pushed back two places and out he went.  Starting on the pole of the last chance race he ran away.

A very unique aspect occurred in this one as Matt Billings, in a GMC Crate Sprint, started at the tale end of the field, worked his way by cars one by one and with four laps to go found himself one spot out of a qualifying berth. He never got there as he was two tenths of a second behind Floyd Billingham (who ran his last Outlaw main in 2001 at Lebanon Valley). It would have been one of those great racing stories.

Two different types of yellows in the main as Logan Schuchart did a 360 spin, but kept going and with Outlaw rules he got the spot where he blended back in.

The other, well, it was different.

There was plenty of muscle by drivers as instead of being aggressively cautious there was simply aggression. No one was giving an inch and in the chaos Sheldon Haudenschild found himself sitting on the infield after contact.

That eventually proved to be the issue as Sheldon simply lost it. He stretched out his arms, looking at the flagger for a yellow, but it never came. Frustrated he simply hurled his helmet onto the race track bringing out the yellow for debris on the track.

His crew member was pretty animated as they pushed the car to the pits as he expressed with a hand sign his feelings toward the tower (maybe the flagger). However, in the flagger’s defense the tower makes that call. It’s just the way it is.

In the end Gravel coasted to the win, Schatz was second and Colagiovanni became a crowd favorite with a podium finish.

Once again Wight was the show from 13th to second in the green-to-checker event.

While Jimmy made it a snoozer the action for second was simply unbelievable.

At one time Mike Stanton, Bob Henry, Max McLaughlin, Billy Dunn and Wight were all right there together laps after lap. It was wheel to wheel, side by side and bumper to bumper with positions swapping over and over again.

In the end Max was third, Dunn fourth and Henry fifth.

For Max McLaughlin it was the first time he’s driven a 358 and he indicated it was quite different. The car they used was one he runs in the Deyo series with body panels off and the Deyo legal motor out. He noted he expects to possibly run at Super DIRT Week and Eastern States.

In heat action the Zach Payne-Henry confrontation was interesting. Contact was made and returned, but it didn’t stop there as it kept on going.  In the end Henry got third and made it to the draw.

Twelve year old “Bam Bam”  Brock Pickerous attempted to qualify  and eventually finished seventh in the last chance race. You could see the improvement as the race wore on as he was battling and much different surface than he is used to.

Lance Willix dropped to the infield while he was in a qualifying spot in the last chance race.

A.J. Kinglsley worked hard all night to get into fourth in the consi, but didn’t have a ton of luck in the main.

Well, the 358’s are done and the big-blocks join the Outlaws for night two.