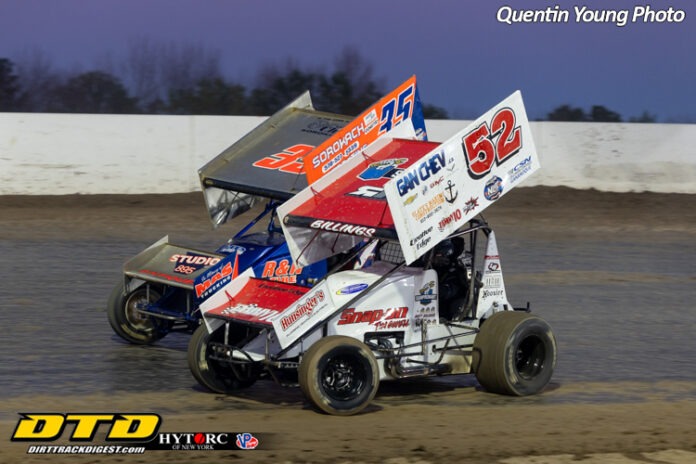 Thousands of fans were on hand for night one of the Empire State Challenge for the World of Outlaw Sprint cars on Saturday night and they almost witnessed something that is totally unheard of.

Oshawa, Ontario car owner and Brockville’s Matt Billings showed up for the high powered event with their Crate Sprint and they really didn’t know how things would go.

Matt said, “Hey, we are just a bunch of crazy Canadians who have come down here to have fun, drink some beer and we will see what happens. Hopefully, we can get into the show. With shows like this you never know who is going to show up, if there will be enough cars and so we are here.”

Billings said, “We need a dry track and we will see what happens.”

So heat action took place and he was tenth out of ten.

It was on to the last chance race and what happened there turned more than a few heads.

Billings started at the tale end of the 11 car field and the track was starting to be just as he had desired.

“I thought we were going to do it,” Billings later said.

He started to pick off cars but simply driving a steady lane at a consistent speed.

He passed Joe Kubiniec, Austin Bishop, Mike Stelter and Bill Rose before he found himself in seventh place with four laps to go. The No. 52 closed in on the sixth and final qualifier Floyd Billingham, but it was to no avail as Billings finished just two-tenths of a second behind the last car in the main.

Matt said, “I spent too long trying to pass the 6 (Rose) and I was thinking maybe this could actually happen.”

Billings has been out in the Hunsinger 52 five times this year and has three wins, a second and fourth in the Canadian Action Series. He is a contender wherever he goes in that class.

On Saturday night he simply said when it was over, “We had fun, the car is fine and we will try again tomorrow.”

It would have been one hell of a story if the little Crate that could actually had qualified for a World of Outlaws main event.