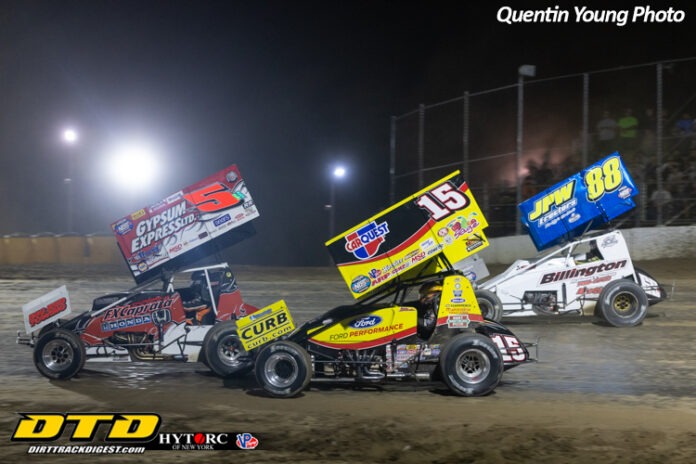 Central New York fans know Chris Hile as a capable big-block Modified driver, but on Saturday night at the Weedsport Speedway the 20 year Modified veteran jumped into an even deeper pool in making his debut in a Sprint Car.

In the end it was a very good night.

Talking with Chris on Friday night at Brewerton, he talked about how this all came about.

He said, “I guess I was kind of joking with Larry about trying a Sprint Car and he said lets get together and try it. We did a test session at Fulton and I was comfortable. The major different for me was hot quickly they react and the speed. You just turn the steering wheel a quarter of a turn and you can nearly spin it out. It is totally different from the Modified.”

Looking ahead to his World of Outlaw debut he noted, “I don’t know what to expect. We will see how it goes, but it is a neat opportunity.  I really have to thank Larry. We have been good friends for 20 years and in each others wedding and this is something I’m looking forward too.”

Continuing he said, “I guess we are jumping in the deep end of the pool, racing with the best of the best. I’m not nervous now, but I probably will be when they push me off.”

Along with Larry he ran a 360 powerplant for the night.

So when Saturday arrived he was ready to go.

He time trialed 12th in his first effort.

Reflecting on those laps, Hile said, “I am still pretty inexperienced and I just want to make it more comfortable. I tried to hold it straight and not slide. I sort of drove it like a Modified. I don’t know if it drives like a Sprint Car, but it felt like a Modified.”

Heat action saw him line up outside of the second row, but on the first lap coming off turn two James McFadden stormed by the inside with a basic “get out of my way I’m coming” move.

Chris said, “I was cutting to the bottom and the 83 made a run and came across my front end. I had trouble getting woed down and it could have ended my night,”

He ran in a qualifying spot most of the race until Dave Axton got him.

Coming off four on the last lap, Hile set the car to the outside and at the line grabbed the sixth and final qualifying spot for his first A-Main with the World of Outlaws.

Starting alongside his teammate directly in front of the consolation cars the race began, Chris settled down and attempted to do what he could with less than 40 career laps in a Sprint Car under his belt.

Standing in the pits as the night wound down, Chris said, “We came home in one piect. It was neat. I wished the yellows had come out differently. When the 2 (Gravel) passed me I changed my lane and got going much better. I still need to get comfortable. If I had to give myself a grade for tonight I would say B plus.”

Car owner Larry Wight talked about Hile’s performance and sounded like a car owner in saying, “It came back in one piece and the wing is straight. There was a lot of dirty air out there. It was slick and there was really no wing speed.”

So you only get to debut once and for Chris Hile there were some decent memories of making a jump from the usual big-block Modified to something very, very new and significantly different.