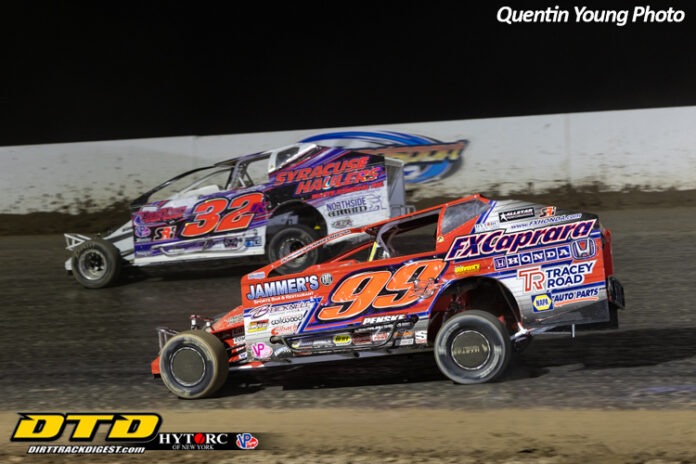 There were plenty of highly regarded drivers to watch at Weedsport Speedway on Saturday night, but it was Larry Wight who put on the show.

Larry started deep in both feature events and in the end earned the hard charger awards for the 30 lap World of Outlaw Sprint car main where he finished seventh after starting 17th and was runner up in the green to checker 35 lap 358 Modified event where he lined up 13th.

Larry said, “I’ll take it. It was a good night and we want to move forward with both classes tomorrow night.”

The night didn’t go according to plan for Wight in the Sprints as he time trialed a disappointing 23rd in the 29 car field with his 360.

Looking back at the time trial he noted, “We were trying some stuff that worked at Brewerton, but not so much at Fulton. We went back to the plain Jane set up to get the car back to where it was.”

Larry said, “I needed to qualify better. Those guys out there are top notch and if you are off in time trials it could cost you 10 spots. Everyone is running the ragged edge out there.”

The 99L was moving from the waving of the green as he picked up three positions on the very first lap and with track conditions coming into his favor he brought the car the the traditional “Larry Lane” on the high side.

There were just a couple of restarts during the event and Larry made the most as he reflected by saying, “On one of those restarts I think I drove by six of them and I really feel my experience from running Weedsport really helped put me up there.”

On his seventh place finish, Wight said, “You want to beat these guys, but your hope is to simply hang in there with them. We want to be competitive. Tonight we started at ground zero with the car and I would have been happy with a top ten. I wanted to stay out of trouble and be competitive. A top five would have been nice, but I feel the 360 helped me personally tonight. It was right for me.

“We want to draw better and have a better time trial tomorrow night,” he said.

In the Modified once again he was consistent and found the comfortable spots on the speedway to allow him to finish just 2.5 seconds behind winner Jimmy Phelps.

Larry had his work cut out for him due to a fifth place finish in his heat.

He had worked his way into the top five by the 12th lap and then went in pursuit of Bob Henry Jr. and Mike Stanton.

Larry said, ”I was making up time between three and four, but there was not enough there between one and two. I was able to pressure Bobby (Henry) but could get him.”

However, a slip by Stanton and a catch in traffic of Henry saw him in second place with eight laps to go.

Phelps over straight away lead was disappearing due to heavy traffic and Wight was able to trim it down considerably as the laps wore on.

In the end Wight settled for second and Wight philosophically looked at the night and simply noted that everything was in one piece and they were ready to race again on Sunday.

The hard charger awards effort are meaningful, but for Sunday Larry simply hopes for a better draw and a better time trial effort.