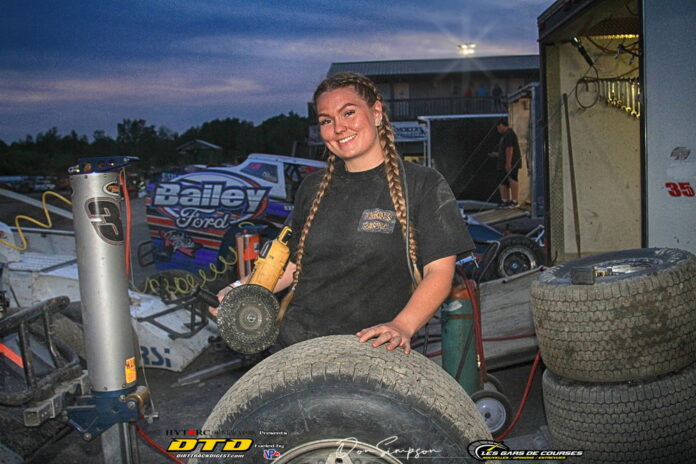 From the top-tier dirt track racing teams to the little homegrown teams at the nearby race track, they all have one thing in common—tires and how they prepare them for a night of racing.

In the world of dirt track racing, there are numerous ideas and methods for tire preparation. One thing is certain. In most circumstances, winning is the result of good tire preparation. Yes, you could horsepower yourself to the lead, but to maintain and win is a different thing. Without good tires, you are surely going to fall off the pace and possibly lose your advantage. 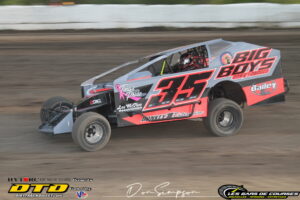 Not everyone enjoys preparing tires as you are always covered in tire dust as a result of all the tire grinding. A lonely, thankless job, out in the elements, whether it’s hot, cold, or dusty. You can always find the tire person secluded from everyone else.

To maintain consistency, each team frequently designates one or two people to manage the tires. However, because Thomas and Elizabeth make up the team, they are both responsible for tire prep in addition to all the other responsibilities involved in campaigning a race car.

For Team Cook, out of Cornwall, Ont., Elizabeth Flanagan is the primary person who does the tires. Things get started early during the week preparing for the upcoming weekend of racing. Once at the track during race day, it starts all over again, siping, grinding, and depending on how big a race it is, Elizabeth may have to repeat the process multiple times in one night.

Some people would ask why Elizabeth enjoys this lifestyle because it’s not for everyone, especially for a woman.

Things become evident when we consider Elizabeth’s past and family history. Elizabeth grew up at the track, so in a way, it’s like her second home.  Ron Morin, her grandfather, owned Cornwall Motor Speedway in addition to being a racer.

Elizabeth’s mom, Carol, worked at the track for many years and would get her children involved at the speedway.

Elizabeth said, “I was about eight when I started working in the canteens! I often joke about how many times I’ve probably served Thomas, unbeknownst to our future. I think watching my mom run the business taught me a lot more than I ever thought it would. She’s the reason for my strength, independence, and resilience. If you know my mom, I’m the spitting image of her. ” 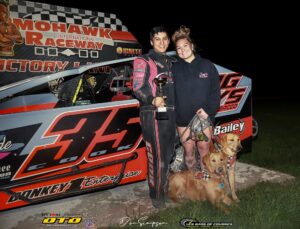 But not only did Elizabeth work at the track, she also raced in the kart series at Cornwall Motor Speedway. She captured the 2010 track championship in her class, something she still holds over her partner and teammate, Thomas Cook.

With Elizabeth’s history revealed, you can understand why she fits into the world of dirt track racing, but the connection with prepping tires only began once she met Thomas, her partner in life since 2017.

Thomas and Elizabeth since then have been campaigning their car and each put in the work needed for race night.

For Elizabeth, it’s mainly tires, as she said, “We always try to have a couple of good sets of tires ready to go. It can be tough because we don’t always have a wide selection, but we always make it work. I have a good idea of what stagger is needed at different tracks. But Thomas and I will talk about it if we’re looking to try something different. We normally have a set ready to go after hot laps, which often happens, and try to save a set for the feature. Sometimes we find ourselves grinding the same set of tires a few times in one night. I think we make a pretty good team and I’m looking forward to the days where Thomas and I have a shop of our own!”

With the two working full-time jobs and trying to manage a race team can be difficult, but things have gotten a little easier recently. 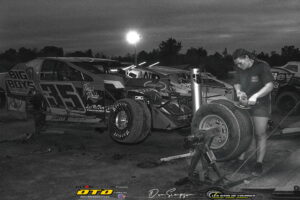 “The last couple of years have been tough, but this year we’ve got a good thing going. Trevor, one of Thomas’ friends, recently started helping weekly, which makes a big difference. Extra hands are always nice to have. After a solid night of racing, it’s very rewarding to see the hard work put it by our team pay off,” Elizabeth explained.

With hard work, a good plan, things do pay off. Elizabeth is a good role model for this concept, as Thomas Cook Racing on any given day out-performs a lot of bigger teams. 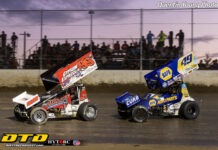