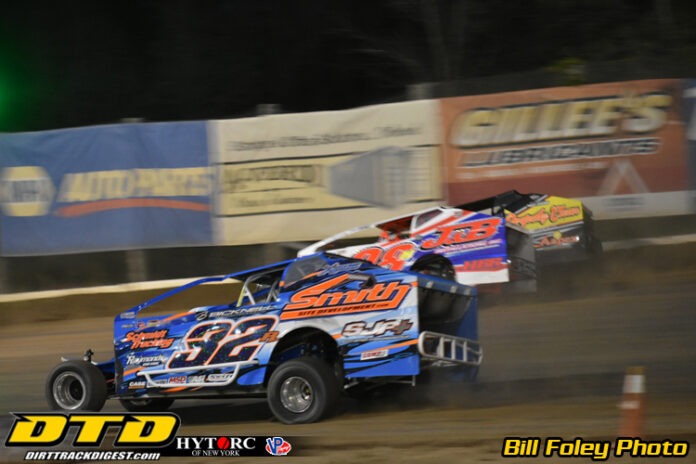 Former Brewerton Speedway big-block Modified champion Jimmy Phelps returned to victory lane for the second time in the 2022 season with a 1.65 second win over a rapidly closing Ronnie Davis III on Friday night.

Dylan Zacharias, with his small-block, put on a show in the early going as he led early only to get passed by fellow 358 competitor Nick Krause.

However, Zacharias went back in front on lap seven and remained their until the 20th lap of the 35-lap event as after racing side-by-side with Phelps, the 27z dropped back to the runner-up spot and remained there until Davis got past with four laps left.

At the line Phelps, Davis and Zacharias were followed by a rapidly improving Jackson Gill and Chris Hile.

Phelps told DTD afterwards, “We have a good package and we are really gaining on it. It wasn’t perfect, but it was close. I was a bit committed to the top early, but the right rear was getting hot. Once I got to the front, I could afford to be patient.”

The victor noted, “It was slick around the top and I gained some balance by running the middle. I am really looking forward to SummerFast as the car appears ready to make its mark on the four night summer series.”

Davis was philosophical about his runner-up finish and said, “I missed by just that much. The car was really good, but if you are just a touch off it can make a difference. I am starting to gain more confidence in the big-block and overall it was a good night. The track started off good with a bite and then the top just slicked off.”

Zacharias, who earlier this season had a runner-up finish, came home a solid third and told DTD, “I’ll take it for what it is. I had some luck in brining the small-block here tonight. Third is more than I expected. When Jimmy got by me he was running the Phelps line and that’s where I was. It was a tough place to have to go around him. I guess I screwed up in a couple of corners tonight and you just can’t afford to do that. But Jimmy and Ronnie beat me. Jimmy is on top of his game and he just seems to get better the older he gets.”

Fourth place Gill said, “Hey, I thought we had a great run.  We’ve had many fine runs this year that have left me feeling satisfied in our first season of running a big-block full-time. We would have been happy to get a couple of top tens. We aren’t at a point where I feel like we can win any given night, but I feel like we belong with the heavy hitters that show every week.”

For fifth place Chris Hile this proved to be a very important night as he entered the race trailing Larry Wight in the race for the track title.

Getting ready to load up after his run, Chris said, ”We are either down by two points or tied with Larry (actually they are tied). With four left we have to make every week count. It was tough to pass tonight. It was actually a momentums kind of float track. Jimmy did a great job of getting up there early and that made the difference tonight.”

Not much attrition in the Mods. Yellow came out on lap 5 when Tyler Trump spun in turn one and Larry Wight made contact with his right front to Trump’s left front. Larry settled for 12th while Trump came across 23rd…Trump missed last week’s action due to a ruptured ear drum. He said, “A beetle crawled in my ear and ruptured it.” He actually had a photo of the insect inside his ear. Isn’t pretty…Trump’s car stopped on the front stretch with four laps to go for a yellow. When asked Saturday morning, Trump said, “Don know for sure just yet, but there was oil all over the legs of my fire suit. Possibly the transmission went bad.”…There were seven Hobby Stocks, 10 Four Cylinders, 25 Modifieds, 20 Sportsman and 15 Mod Lites…Mod heats were won by J.J.  Courcy, Zacharias and Davis…Canadian Corban Millar made his first appearance…In heat action Ben Bushaw was rear end first on the top of turn four while down below Hill spun and Millar went over his front end…Heartbreak for Torrey Stoughtenger. He was running a solid second to Courcy in heat one, but on the last lap suffered a right rear flat tire in turn three. He was less than a half lap from finishing in the runner-up spot, but finished officially eighth…Mod Lite driver Matt Kitts sustained damage in heat action as Tucker Halliday spun in turn four and Kitts broadsided him. Both were towed, but came back for the feature where Kitts was ninth and Halliday 13th…In Sportsman heat action It appeared Zach Sobotka was going to coast across the finish line easily, but at the line Cody Manitta nipped him for a tenth of a second win…The Hobby and Four Cylinder mains were like watching a lengthy hot lap session as Russ Marsden ran away and hid in the green to checker Hobby Stocks. Damien Bechler did the same in the 4 Cylinders…Thomas Mackey was a surprise winner in the Mod Lites with Joe Garafolo and Joe Isabell following…Clayton Brewer III is always a contender, but a bit off on Friday. Car owner Garafolo told DTD, “He had an air pocket in the cooling system and didn’t want to burn up a head gasket. The water temp was bouncing all over the place.” Big hit in points as Clayton is now second to Mike Mullen with a 35 point difference between first and second…Austin Germinio led the entire race for the Sportsman main win. Buckey Hayes and Amy Holland followed…The point race is between Alan Fink and Holland. Amy finished third and Alan 11th. As a result Holland has a nine point lead with four races left…In the four cylinders Bechler has an eight point lead over Chris Bonoffski.