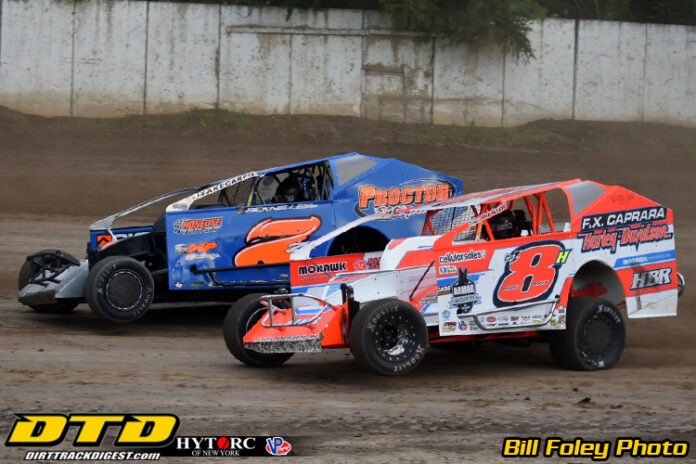 It was not your typical Friday for Max McLaughlin.

There was no prep on his big-block Modified No. 8H as he was making a mad dash simply to be in the Brewerton Speedway pits.

Max was in North Carolina this past week to complete in an Asphalt Crate Modified at the reopening of the legendary North Wilkesboro Speedway.

But his adventure to get back North to compete was stymied from the very beginning.

What was he going to do to get to Brewerton?

He had to get 715 miles to Central New York and that usually is about a ten and a half hour drive instead of an hour and forty-five minutes riding above the clouds.

He said, “I called some friends and finally found one that would come with me. I didn’t have a car because mine is up here. We left at seven o’clock in the morning and just got here in time to race.”

Brewerton wasn’t the only race this week as Max had a unique experience in competing at North Wilkesboro.

He had a good amount of success and he said, “I finished second and third.”

However, the story isn’t where he finished. The story is what he was driving.

Max explained how this all came about, saying, “I got a call from Ron McKee about three days before the race. I asked him if the car could win and he said he thought so. I accepted.”

Continuing, he noted, “When I got there I thought to myself ‘what did I get myself into? The car was a crate 1986 Burt Myers built chassis that I think my dad raced against. It had been won in a raffle.”

Well, Max did what he could in the Carolina Crate Modified Series events.

He was excited to be involved in the event as he said, “There is plenty of history at North Wilkesboro. It was a neat experience. The best in the country were there competing. Ryan Newman, Bobby Labonte, Tony Hirschman and others were racing. It was a great atmosphere. The track was slippery with no grip, but I think we had a good run.”

Eleven year old Paul Hartwig III won both of the crate features and Max said, “That kid is real good. I snookered him a couple of times on restarts, but he recovered. After the red I thought I might have a chance, but the car got tighter than tight.”

After is all day adventure Max salvaged a ninth place finish in the Brewerton big-block Modified main.

Drivers usually get several stories to tell as they age and for Max the week of making the mad dash from Charlotte and competing in the refurbished North Wilkesboro Speedway are a couple he can file away to tell in decades to come.