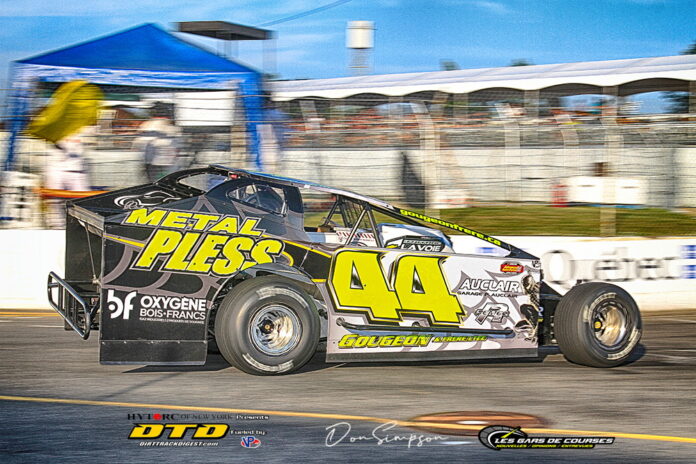 Although Sebastien Gougeon has mastered the art of racing, the No. 44 car would normally be associated with a dirt track. 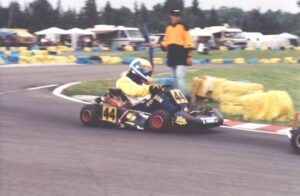 Winning the GP3R in Trois-Rivières was a dream come true for veteran driver Sebastien Gougeon, but the art of handling a car on such a course did not come overnight for the Drummondville, Quebec native.

Over the past three decades, Sebastien has progressed through the classes, beginning with kart racing and moving on to Sportsman Modified and finally 358 Modified. At one point in his career in 2010, Sebastien raced in the STR class, which included several races on asphalt. Sebastien would go on to capture the series championship that year. 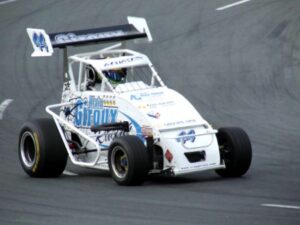 For Sebastien, racing on asphalt is nothing new, and the GP3R results for this year clearly demonstrate that he is at ease there.

But the journey to the top of the podium began months before. On Tuesday, August 2, when the team arrived at the road course at Sanair International Raceway for a day of testing, the culmination of the team’s preparation and strategy began to take shape. 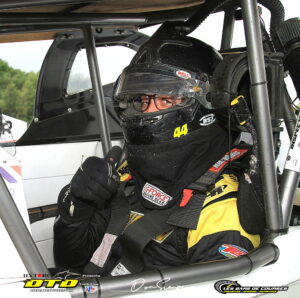 He arrived late at testing, but for Sebastien, it was a productive session, as he said, “We arrived late and waited for the track to dry after the rain at Sanair, and the test went well for us. We did some good lap times and the car was pretty stable and fast. We were trying a new setup compared to last year and were pretty happy with the results.”

Race weekend finally arrived and the weather was hot and humid, which was hard on all the teams as they not only had to battle the track but the heat as well. The qualifying sessions took place on Day 1 of the GPR3. Things got off slowly for Sébastien as the car was not up to pace, however, things quickly improved with some minor changes. 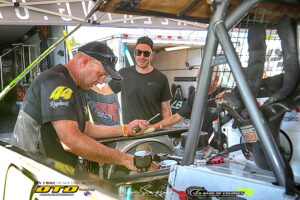 Sébastien stated, “The car was good for qualifying. After the warm-up, we were not happy with how the car was handling. The warm-up lap times were not as bad as we did in the 13th position, but we decided to make some changes just before the qualifying. It paid off as the car was faster. We did first in Q1 and second in Q2. We started on the outside pole on the dash, and won it.”

For the remainder of the day, Sébastien would maintain his speed, eventually winning the pole with his victory in the Dash. 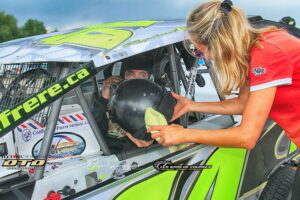 “It’s not always the finest position, though, as you are in the field’s crosshairs,” he said.

He was still very proud of what he and his team had achieved.

The race arrived, and it was even hotter than the day before. But as they waited out the day in anticipation of the 25-lap feature race, Team 44 stayed composed and focused.

After close to a nine-hour wait in the heat, Sebastien Gougeon climbed into his car for the final event. Sebastien was confident in what his team had given him when it came to the car.

Sebastien led the 37-car field to the green, with Alex Tagliani battling for the lead for the bulk of the race. But Taglianie later handed the case to Marc-Antoine Camirand and Maxime Plante, giving them a chance to contend. Sebastien, though, would triumph on this particular day. 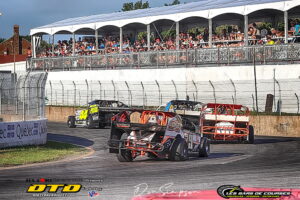 A career-best for Sebastien to win at Trois-Rivières, one of the longest-running road races, is historic as he will add his name to the list of past winners like Gilles Villeneuve, Patrick Tambay, and four-time winner, Jacques Villeneuve Sr.

Sebastien reflected on the win when he said, “We can’t be happier about the results of the Saturday race. We started on the pole and kept it for the whole race. We had to hold off Camirand and Tagliani multiple times after all the restarts. We were very disappointed after last year’s result as we were leading and I hit the wall before the Duplessis door and lost the pole to Francois Bellemare. I didn’t want to make the same mistake this year so I stayed very focused all race long.”