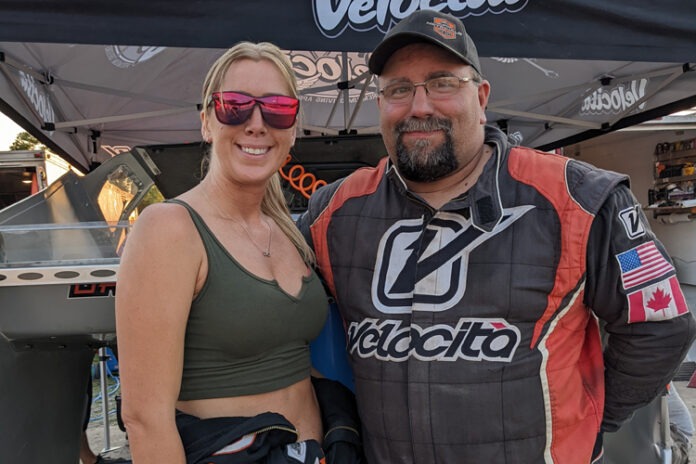 Michelle Courcy faces a significant challenge each and every day of her life so when she climbs into the cockpit of her No. 4 big-block Modified it is an escape from those worries.

Michelle and husband J.J. are the latest husband and wife Modified team and compete weekly at the Brewerton Speedway.

However, Michelle has a little more to her story than most racing drivers.

She suffers from a disease that impacts her 24 hours a day, seven days a week, 365 days a year. It never ends for her.

Talking to DTD she explained her situation.

Michelle said, “I have Systemic Mastocytosis which is considered a type of blood cancer. There are two main types and I have the more aggressive form. There are no specialists for just this disease, but people mostly have to find a doctor who is familiar with it. Most doctors haven’t even heard of this disease and I have an emergency room ‘guide’ for doctors to know how to treat me because I can’t have most medications.”

A more simpler term for this is Mast Cell Disease.  It affects organs, skin and the heart as she explained, “It really feels like a flu like sickness that gets into the bones and joints. Sometimes the pain is so bad I can’t move.”

Michelle continued, “There are several triggers for me including adrenalin and severe emotions. Racing can trigger it and just in case I’ll carry an EpiPen in case I need it when I get out of the car.”

The side effects can be major as she said, “Sometimes it can affect the brain, how I speak and form words. However, I’m on good medication and will be for my entire life.”

“I want to bring awareness to this. You never know what types of battles people might be facing,” she said.

Michelle explained, “I thought I was going crazy. I had stomach, head and heart issues. I was always covered with hives. I was swollen. It took 10 years to figure out what I had and in fact we found it accidentally.” 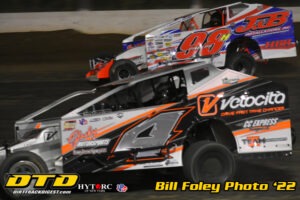 Continuing, pointing to a spot on her left wrist, she said, “I am a cancer survivor and I told the person giving me treatments about the hives. They took of biopsy of this one and found it. There were signs of Lupus and I tested borderline for auto immune deficiencies.”

In regards to racing she said, “I will continue to do this until I can’t get in the car. For now, I’ll just keep on going.”

Racing is an escape for Michelle as she noted, “The Oncologist and Hematologist are my two main specialists, but I regularly see a Cardiologist, Dermatologist, Gastroenterologist, Rheumatologist and yearly I see a Neurologist.”

The 2022 season is considerably different than either J.J. or Michelle could have imagined.

J.J. has been running toward the front of the field in his qualifying races and even picked up a recent heat win.

Michelle is getting use to the big-block.

J.J. said, “I have a new ‘22 Teo and so far and super happy with it.  You can really feel a difference and its handling was above and beyond what I had had in the past. Michelle has been fast, but stupid things are just biting her in the ass.”

When the season started plans were, according to J.J., “Michelle was going to run the Sportsman and I would run Mods. We sold the crate we had and the car Michelle has now is a former Billy Dunn car. She probably only has 30 races in a Sportsman over the past five years and one win. This is different for her.”

J.J. has been around a while and explained, “I drove IMCA’s, Sportsman and big-blocks.”

It was just a couple of years ago that Steve Hart reached out to J.J. to provide assistance and support. Hart owns J.J.’s car and Michelle owns hers, but Hart owns the big-block engine.

There have been couples in Modified racing including well known Stewart and Jessica Friese along with Chris and Katelyn Hile, but J.J. and Michelle Courcy are the latest and hoping to see improvement as the season progresses.