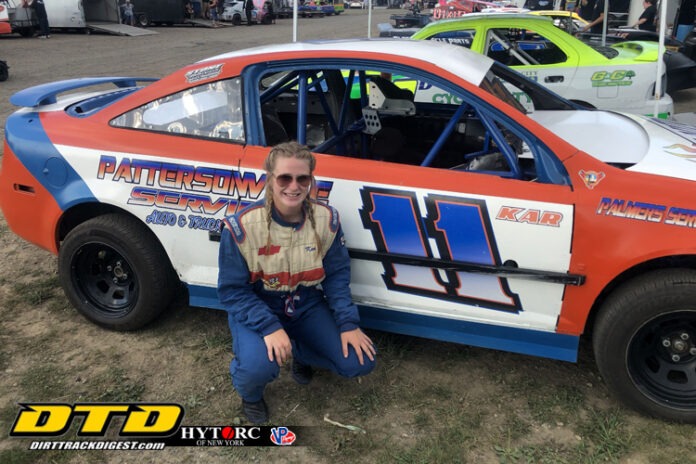 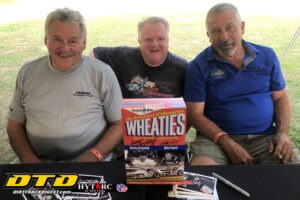 After three weeks of recliner racing we finally made it to the tracks in person.  Friday night at the Great Race Place it was a special night to remember a very special person to the racing community, John Grady, long time photographer and avid race fan.  John’s son Chris brought in many drivers from days gone by to sign autographs and reminisce with the fans.  Billy Pauch was on hand to sign copies of the new book on his life, “The Last Cowboy” written by Buffy Swanson.

Sitting alongside Pauch was another icon of our sport, Kenny Brightbill and with them when we were there was a huge supporter of our sport, John Lakata.  John brought along Wheaties boxes, each with pictures of Pauch and Brightbill. 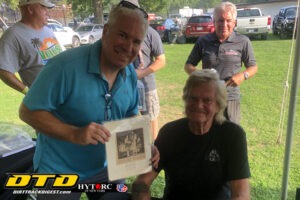 Another veteran driver on hand was Ralph Holmes who has the distinction of being the very first driver to win a Schaefer qualifier at Fonda Speedway, 50 years ago and Chris Grady dug through his father’s memorabilia to find the victory lane photo that appeared in the “Gater Racing News”.

As we roamed the nostalgia area we ran into Jim and Jason Becker and their families.  With Jim was his daughter, Megan and with Jason were two of his sons, Brody and Jared.  Jim 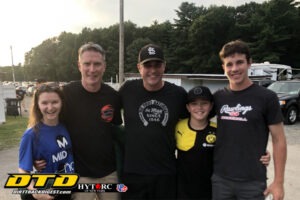 and Jason were long time competitors in the Street Stock division at Fulton and Utica-Rome.  Jason stepped away and Jim still competes in the Modified division at Afton when his schedule allows. 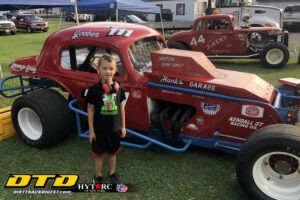 the grandstands.  We spotted a young man that was enthralled with the No. 111 Coupe of Goober Scheidel.  His mom said, six year old Orlando from Queensbury loved the 1935 coupe.

On Saturday night we returned to Fonda and as we entered the gate and saw all the young fans near the Fonda Kid’s Club end of the grandstand we learned it was backpack give away night.  Backpacks were all donated by drivers and their race teams, some 77 backpacks went home with excited young fans by the end of the night.  We ran into one of the young backpack recipients, 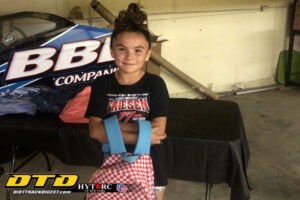 10-year-old Liz, who was busy trying to decide which backpack she wanted.

Ken and Kerrie Hollenbeck have been racing four cylinders for a number of years and fans and competitors alike have become familiar with the No. 12 of Ken and No. 33 of Kerrie.  This year, like other years at Fonda, the brother team have dominated the win column in the division at the track and have become familiar in victory lane also, Ken with his quiet and modest demeanor and Kerrie with his list of people he thanks each week. 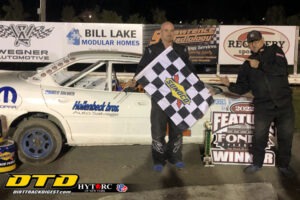 decided now is the overall champion in the division.  One thing for sure it will be a sibling rivalry played out on the track this Saturday night for all to watch.  Who will it be?

At Glen Ridge on Sunday, was a young lady we first met at the Fonda Car Show in March, Hayleigh Gates (niece of Kenny). Since then she has been part of the crew on Kenny’s No. 35 Pro Stock when she’s been on summer break from college.  Her yearning to drive began to peek as she became more and more familiar with the workings of the car and crew and she got to drive for her first time at Brookfield Speedway in early July.  “I finished third,” said Hayleigh, but there were only three cars.  Everyone has to start somewhere and most racers will tell you they’ve all had their own “first race’.

This brings us to a week ago at Glen Ridge, although we weren’t there to see it, we did hear all about it when we ran into her at Fonda this past Saturday.  “I won,” said Hayleigh, and had no hot laps, just went right into the race and there she was in victory lane in the four cylinder division.

The opportunity came about when Jay Ingersoll, who races in the four cylinder division, asked her if she would like to driver his car in a Power Puff event that night and the rest is a story she will be able to tell for the rest of her life, how she won the second race she ever ran. 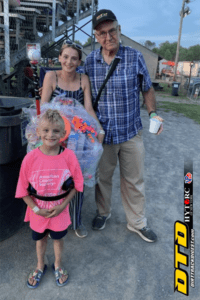 Now Hayleigh didn’t stop at her second race and the win, she returned to Glen Ridge this past week to compete in the special Daryl Hillman Memorial event.  She started 18th and made her way up to 10th.  After the race she was happy with what she had done and wished she could continue racing, however, she has a college career to return to next week.

At Glen Ridge Sunday there was a raffle to benefit the American Cancer Society and Ed won one of the prizes and decided to give it away to the first young fan he came across in the stands.  Lloyd was that lucky young fan and his smile stretched across his whole face.