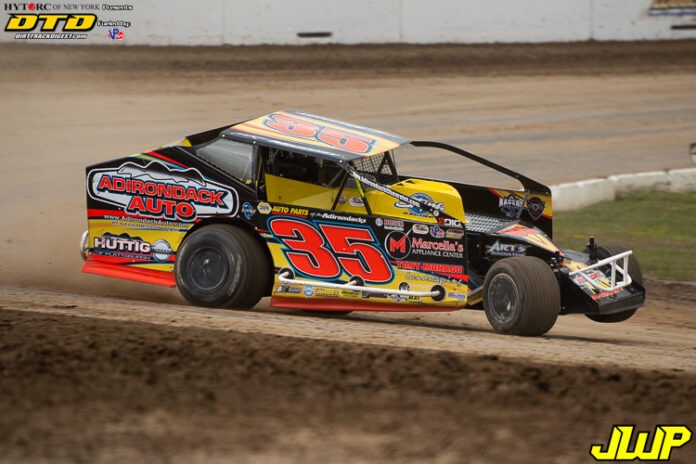 Racing is difficult enough, but for Mike Mahaney and Erick Rudolph it was an even bigger chore to get to the Weedsport Speedway for night one of SummerFAST.

Despite obstacles, they ended up with respectable finishes as Mahaney was runner-up to winner Jimmy Phelps and Rudolph came from a provisional 27th starting spot to bring his ride home seventh.

Mahaney and his crew haul from Elizabethtown, located in the upper northern corner of New York State near Plattsburgh.

And anyone who travels will tell you there is no short way anywhere from Plattsburgh.

Mike, his wife and a crew member were riding in the toter when the obstacle arose.

Mike told DTD, “The right front tire of the toter blew on I-90. It took out the hood, fender, and head light. We had quite a bit of damage. We had it done in less than an hour which isn’t really bad for changing it on the side of the road. Tires on these things aren’t easy to replace.”

Continuing, he said, “We have maintenance we have to do on the car this week and now we also have to turn our attention to making repairs on the toter. It gives us plenty more to do.”

Meanwhile, while Mahaney was about an hour out of Weedsport making his repairs on the eastern end of the Thruway, just to the west of Weedsport another big-block driver was facing a similar problem.

Erick Rudolph, much like Mahaney, usually arrives at the track he is competing in well ahead of hot laps.

However, at 6:15 p.m. as cars were on the track the Rudolph hauler was sitting outside Weedsport pit gate while the crew signed in.

It’s usually a relatively each couple hour drive to Weedsport.

However, not on Monday as McGinnis said, “We blew a tire on the toter on the tollway (Thruway). It blew near Scotsdale (Rochester area)and we were able to nurse it to the rest area to get it changed. It got the generator, but it sounded like the entire side of the truck was blown off. We got it changed, but we were running late.”

So when the night was over both teams anticipated the regular maintenance of race cars on Tuesday, but also would need time to get their toters back into racing shape.