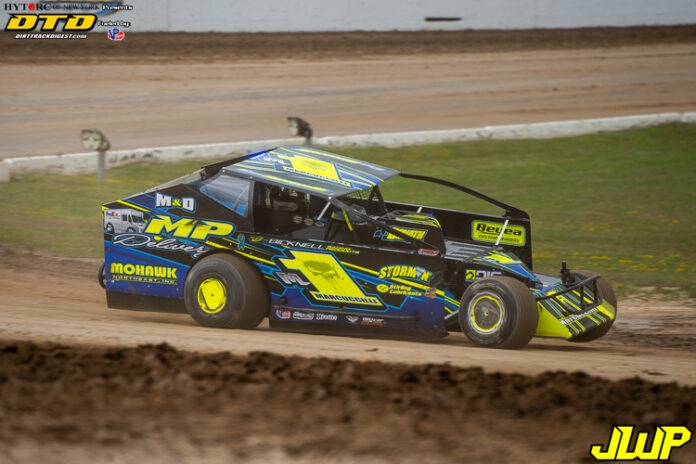 Dave Marcuccilli is no stranger to Weedsport Speedway. Much like a few weeks ago when the World of Outlaw Sprint Cars visited the track and 360 powered cars were competitive, Marcuccilli knew his potent small-block could hang with the big-blocks, plus he just feels better with the small-black.

“I have the small-block tonight,” said Marcuccilli. “I really haven’t run the big-block enough to run it (competitively).”

Marcuccilli had anticipated the track would eventually come to him and that possibly he could have a solid finish in the first SummerFAST race of the week.

Well, everyone is well aware time trials are one of the most critical points of the night when racing any Super DIRTcar Series event.

Marcuccilli went out and earned himself the outside spot in heat number three alongside Matt Sheppared. The No. M1 was scored third behind Sheppard and Zach Payne at the finish earning him a spot in the draw.

And when Marcuccilli drew number three he knew this could possibly be a special night.

He ran third for 85 laps and finished a career best fourth in the 100 lap Hall of Fame event.

Sheppard had passed the M1 on the 48th lap as Matt went from fourth to second on a restart.

Marcuccilli kept the No. 9s in sight throughout the remainder of the race and at times rolled up and apparently was ready to make a pass.

However, as the checkered flew he settled for a spot one position off the podium.

Dave said, “I had an awesome time tonight. It was the most fun I’ve ever had in a series race and my first top five.”

Previously, he said his best finish was at Can-Am as he said, “I was eleventh, but started third and fell back quickly. It was a lousy race, but we did finish 11th. This is so much better.”

He talked about his pursuit of Sheppard, noting, “He is the MAN! I rarely get a chance to race with someone like him. This is a big deal for me.”

As the race went on, Dave explained, “It got really slippery out there. I think that actually helped us. I was a lot better than Matt between three and four, but he was much better than I was off two. It’s tough as the big-blocks can outdrag the Small Blocks on the straights, but this is just great. However, I’ll take it all day.”

So Super DIRTcar fans had a relatively new name within the top five as SummerFAST kicked off and Dave Marcuccilli and his fans certainly will remember this night at Weedsport.”