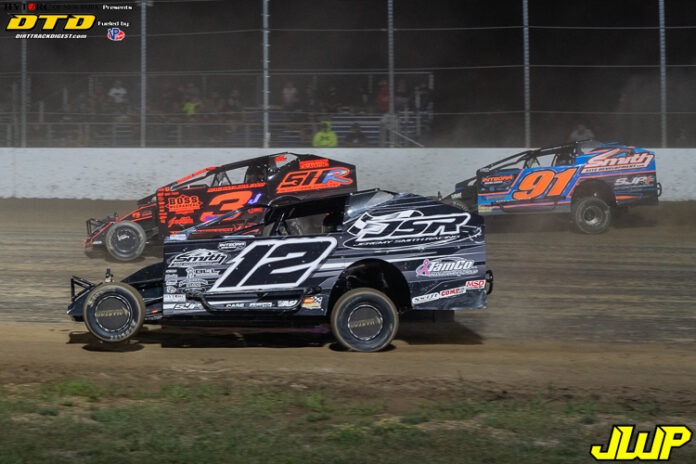 The Hall of Fame 100 wasn’t originally scheduled as part of SummerFAST, but Mother Nature had other plans for that event in erasing the original date.

So here in mid August Dirtcar has put together something a little different in combining the rained out Hall of Fame event with two leased track shows at Brewerton and Fulton while finishing it off at Land of Legends on Thursday.

More and more I am hearing from drivers “We aren’t professionals (except for a couple) and we have every day jobs we have to do. Four nights in a row is tough.”

For drivers with their own business it is time away from the job and thus cutting income to the family.

They already plan on taking a week’s vacation for Super DIRT Week so that really can put a drain on time off.

However, racing is an addiction that just seems to drive you to get the car ready, get to the track and go to work the next day.

I point this out so that maybe organizers and fans will be a little more appreciative of the efforts of the folks putting on the show.

These big-block (and small-lock) drivers are the heart of racing in America. They are hard working, family oriented human beings who are passionate about grassroots racing.

Well, 43 Modified drivers pulled into the pits at Weedsport to kick off something that Jimmy Phelps inferred on victory hill, might become a regular event if it works.

Were there any surprise entries?

Well, 2004 Super DIRT Series champion Gary Tomkins was back behind the wheel of a Dave Rauscher owned car. Gary plans to run Weedsport and LOL this week and the team is prepping for a repeat venture to Oswego for Super DIRT Week.

Chris Hile was fast time for the night and benefited from going out in the first group. He settled for fifth by the time the night was over.

After hot laps Anthony Perrego said, “The track is a little heavier than I expected and the motor wasn’t quite right, but we’ll figure it out.”

They figured things out well as he was one of the few trying to run the high side throughout the race and came home eighth.

Chad Phelps was the lone driver in two divisions as he ran a micro owned by Rick Lockwood. Phelps was runner up in the 600 main event. He started 18th in the 100 and finished 14th. However, in his heat he started ninth, passed four cars on the very first lap and got to fifth and a qualifying spot.

Nothing sensational as all winners came from the pole starting spot.

Justin Haers bogged down at the start of his heat and got shuffled. He said, “I lost all power in the dash. I kept playing with the master switch turning if off and one before it finally caught. We have a long way to go now.”

That way was too long as with only two coming from the consis he was fourth and his night was done.

Brian Calabrese brought out the yellow with a spin between three and four in heat action.

In heat two Darren Smith’s right rear went airborne as he got over the front end of Gary Tomkins. However, both kept going.

Phelps’ major heat move gained an assist when Alex Payne and Pat Ward got together high between three and four thus opening up the bottom where Phelps took advantage of the opportunity.

Larry Wight was on cruise control, said he caught a wet spot on the high side and hammered the outside wall at the west end of the speedway with his rear end. Fortunately, it was the last lap as the body panel was digging directly into the tire. Wight appeared concerned in checking over the possible damage from big time hit, but he came from 12th to sixth in the 100.

Small-block driver Dave Marcuccilli gained attention by running third most of the night and settling for a well driven fourth for his career best SDS run.

In consi action teammates Darren Smith and recent Hall of Fame inductee Billy Decker gained the wins. At the end of the night rookie Smith was the first car one lap down in 16th. Billy had to pit late in the race, came back but settled for 22nd.

Adam Pierson appeared very competitive in the early going and finished 10th. He had said earlier, “We will see what we can do tonight and it would be nice to finish in the top ten.”

Erick Rudolph arrived late due to a flat tire on the toter while heading east on the New York State Thruway. He finished eighth in his heat and third in the consi. He somehow got a provisional (he is not a platinum driver) and made the most of it.

Starting 27th he was seventh and in the last 10 laps picked up three positions.

Another guy who had toter issues was runner up Mike Mahaney as he too suffered a flat on the hauler along the Thruway. Heavy damage was inflicted on the toter and the team will be working to repair the hauler as well as continue maintenance on the car throughout the week.

In both cases of breakdowns it was fortunate no one was injured.

Well, it was no struggle whatsoever for the 98H on Monday night as he won by nearly three seconds. Heading to familiar tracks such as Fulton and Brewerton could be beneficial for the team.

Matt Sheppard made a gigantic fourth to second restart move in the main event, but in the end he settled for a “point night” with a third. He maintained his SDS point lead after coming off consecutive series victories at the end of July.

Tim Fuller exited the 100 on lap nine with a left rear flat.

Ronnie Davis started up front, but just past the halfway point the car dropped away. He was fifth on the 53rd lap. However, eventually he finished 18th a lap down.

Mat Williamson finished in eighth after starting sixth as Weedsport hasn’t been overly kind to him recently.

For Zach Payne his goal was to “come to qualify” and he made the draw. He said, “This is the longest race I’ve ever run. He started 10th, dropped back to 17th by lap eight and worked his way back to 11th while finishing all 100 laps.

In the main events not many yellows.

Marc Johnson slowed on the front stretch, went to the grass, but stopped. He was simply too close to the track and yellow had to come out.

On 70 yellow came out as Zach Payne got out of shape in turn four. It appeared he was going around and the race slowed. However, he kept going.

Fans should have had fun watching Sheppard, Marcuccilli and Mahaney battling for second.

Watching Wight, Williamson, Rudolph and Perrego testing the outside in the bottom oriented track was always fun to view. It was just around the midpoint of the race and a desperate time for drivers looking to pick up key spots in case the track totally locked down.

Anyone who stayed for the 25 lap Sportsman event saw a classic.

Waldron had a bit of a handicap as he had 15 stitches put in his chin earlier in the day to start his birthday celebration and he had a bandage wrapped around his neck and chin.

Scott Kreutter took Trey Hoddick’s indoor 600, put a wing on it and had a 2.6 second win over Chad Phelps and Ivan Forney.

Lone damaging crash came in heat action as Zach Bobbett got the first turn outside wall.

Well, night one of SummerFAST is history and a decent start it was.