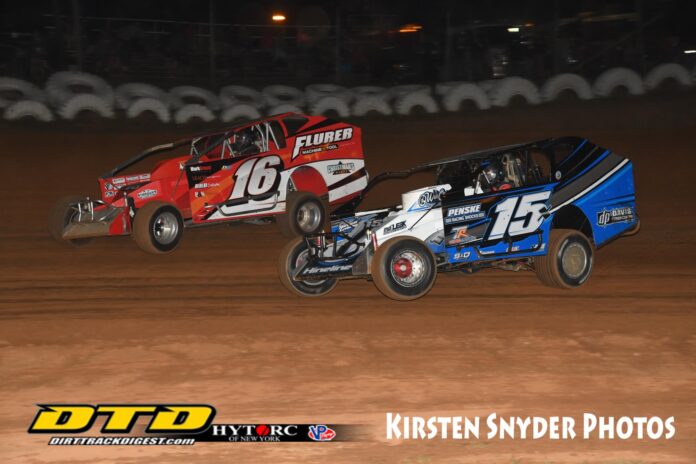 First off, I would like to apologize for my lack of a column from Big Diamond the past couple of weeks. Sometimes the real job gets in the way along with things happening at home that have taken my time away from writing. With only three weeks left in the season at Big Diamond (wow cannot believe it is almost over) it has been quite a season in all three divisions. With the exception of the Crate 602 Sportsman division where Brandon Edgar has a distinct advantage, both the 358 Modifieds and Roadrunner division will be decided on the championship night August 26th.

Coming oh so close on more than one occasion, last Friday night at Big Diamond Speedway finally saw Reimert cross that threshold to become a feature winner in the Insigner Performance Modified division. Over the past few years, Reimert has had the lead taken away on the last lap, broke while leading, suffered through untimely yellows and about anything else that can happen to prevent him from winning. However, this past Friday night Reimert showed just how good he can be by dominating the 25-lap feature race.

“This means a lot,” said Reimert. “It means a lot for everyone who has been with me since the beginning of and have stuck with me over the past few years until I finally got it done. I just hope it doesn’t take me another three years to get another win.”

Reimert, who also won on Saturday night at New Egypt Speedway now has four wins on the season. The Oley, Pa driver has two wins at New Egypt plus one each win at Big Diamonds and BAPS. Ironically his win at BAPS was also after a 410-sprint car race which seems to make the track to his liking.

“Running after the sprints usually leaves us with a slick track,” said the always low-key Reimert in the tech shed after Friday night’s win. “I really like slick tracks; I think it puts it more in the drivers’ hands. You have to pedal the throttle more and drive the car and that’s what I like.

2022 seems to be a coming out year for Reimert who in his previous four years of Modified racing was  not able to get that elusive win but this season the young driver is definitely coming into his own.

“We really did our homework over the offseason,” explained Reimert.  “We focused on getting the car better and I also tried to focus on myself. Like keeping a better composure in the car and staying more focused during the race and not letting things bother me. Just trying to remind myself of the task at hand while racing and it seems to be working for me and for the team right now.”

While standing next to Reimert waiting to interview him, I noticed drivers Ryan Watt and Duane Howard walking up to him to congratulate him on his first win at Big Diamond, so I asked Reimert what that meant to him and how it made him feel to have those drivers acknowledge his accomplishment.

“That means a lot to me to have them walk up here to congratulate me,” mentioned Reimert. “I watched those guys growing up and watched them win everywhere. It means a lot just to race with them let alone having them say congrats at the end of the night. It is really cool.”

The “Quaker Shaker” Rick Laubach has a total of 25 career small block wins at Big Diamond Speedway over his long and distinguished career. However, the wins have become much harder to come by the past few seasons at Big Diamond. 2021 saw Laubach and his wife Tara start a new team in Shaker Motorsports and like any new team they had growing pains. Laubach did manage to get a win late last season but as a team they struggled.

Laubach who is not one to give up as he along with Tara and their sponsors came into this season with high expectations. With the state of Modified racing right now in regard to getting parts and motors, the team was forced to miss some races at Big Diamond in the beginning of 2022 but since they started to race weekly, you can see the progress Laubach, and the team have made.

Friday night August 5th, it all came to a crescendo as Laubach once again looked like the Laubach of old as he dominated the 25-lap feature race for his first win of the season at Big Diamond. Laubach took the lead and was gone, winning the race by over a straightaway. It was a big boost for the No. 20 Shaker Motorsports team.

“I don’t think I have lost it just yet,” said a smiling Laubach. “I just need the car to do it. If we have the car and the night goes without any problems, I promise you I can still get it done. We know we have been solid, but we just start behind everybody all of the time and it’s hard to win doing that with the competition that races here weekly.”

“Tonight, the track widened out and we made the right adjustments to the car and looked at what we were able to do. I knew the car was good right from warmups, it felt the best it had in years. It was the same feeling like I had when I won nine races at Bridgeport years ago. After warmups, I told the guys I knew what to do. The track was very good tonight, there was brown down on the bottom and some brown on the top and I was able to work both grooves depending on the situation. Honestly, I could go anywhere it was that good.”

It was a good week for the Laubach’s as Rick’s son Matthew won his first ever Junior Slingshot feature the previous Wednesday night at Action Track to make it a great week for both father and son.

“My son Matthew won his race on Wednesday so I couldn’t let him get one up on me,” mentioned Laubach. “Every year since he was born I have got a picture in victory lane with him but he is at the shore tonight so he is going to miss this one but he got me the picture on Wednesday night and as a father that one means so much more.”

With only two races left to determine the 2022 Insigner Performance Modified championship, it will definitely come down to the last points night on Friday August 26th. This Friday night’s “Prelude to the Coalcracker” is show up points only for the Modifieds so that assures the title will come down to Championship night…

Currently, Brett Kressley leads Duane Howard by 30 points in this back-and-forth battle. Craig Von Dohren is third and not technically out of the race, but it will take both Kressley and Howard to have a very bad night for Von Dohren to win the title…

If Duane Howard should win the title, he can look back to Friday August 5th as the turning point. Howard suffered a flat right front tire early in the race and just made it back out of the pits as the field was exiting turn four to restart the race. Howard not only caught the field but drove up to finish in fifth without the benefit of a yellow. Sheer determination from Howard and Getz Motorsport No. 15G team…

As mentioned before, this Friday night is the “Prelude to the Coalcracker” race paying a nice $10,000 to the winner of the 50-lap feature. Former Big Diamond track champions Billy Pauch Jr and Timmy Buckwalter have both confirmed that they will be in attendance shooting for the big bucks. Another former track champion Ryan Godown will make a decision later in the week to see if the R&M Motorsports team will be there…

2021 Jack Rich Coalcracer winner Alex Yankowski will also return to Big Diamond this Friday aboard the Stankiwiecz Roofing No. 2 shooting for the Prelude victory…

After blowing the motor on the Fitzpatrick Racing No. T102 on Friday night August 5th, Ryan Watt was back in action after the team purchased a motor off former Grandview driver Kyle Weiss. Watt drove the No. T102 to a fine fourth place finish this past Friday…