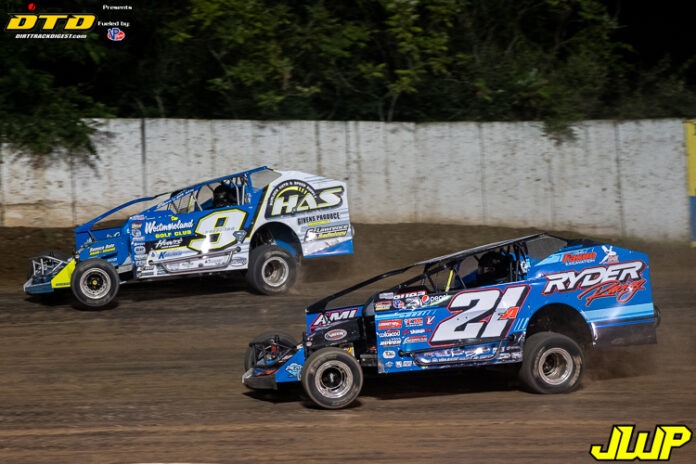 SummerFAST is two days old with two more dates slated for the Super DIRTcar Series regulars on Wednesday at the Fulton Speedway and Thursday at Land of Legends Raceway before drivers return to their weekly action on Friday and Saturday.

There is no doubt it is a grind as teams have hours and not days to prepare for the next event. Two drivers took time to discuss their feelings with Dirt Track Digest about the event.

Matt Sheppard, the current series point leader, feels like this is nothing new. He’s a fan of the week-long event.

“I don’t really have a problem with it,” said Sheppard. “It seems like we used to do this all the time. I feel like we barely race now. On the Super DIRTcar Series we used to have a lot of grinds. It is definitely a cool deal here in Central New York. All four tracks are less than an hour from my house. That’s nice, especially after I’ve traveling back and forth to Middletown once or twice a week. I’m definitely not missing the crazy travel. It’s kind of a neat deal. After it shakes out, they’ll (World Racing Group) see how much the fans liked it or didn’t like it and we’ll see what happens next year.”

Britten shared similar feelings to Sheppard. He doesn’t feel like he hasn’t been racing as much as in the past.

“If you don’t break anything, not getting in wrecks, I feel like I get better,” said Britten. “I feel like part of my problem this year is we just haven’t had any rain outs like weekly stuff, but it seems like we’ve done no series races. When you are late in June, July, and August I feel like we would do two to three series races a week. You go into Canada and you just get so much seat time that you seem to figure your shit out and that just gets you rolling. I just don’t feel like we’ve had that this year.”

Britten likes the intense schedule. It allows him to get out his weekly grind. Although the kick-off at Weedsport didn’t go as well as planned.

“I think sometimes when you’re racing weekly it’s good, but you also get so stuck in your ways,” said Britten. “You need to get out and travel a little bit and hit some different surfaces. It seems to help me do better. I mean, apart from Weedsport last night, which I suck at Weedsport regardless. No matter what I threw at it, I was terrible anyway. I don’t know. I guess in hindsight I just probably need to drive better and go back to basics there because I just haven’t found something. It’s like throwing darts at a dartboard, not quite blindfolded, but maybe there’s just one eye open. Either way it’s fun. Like I said, if you don’t wreck and stuff, you’re not breaking then I think it’s a lot of fun.”