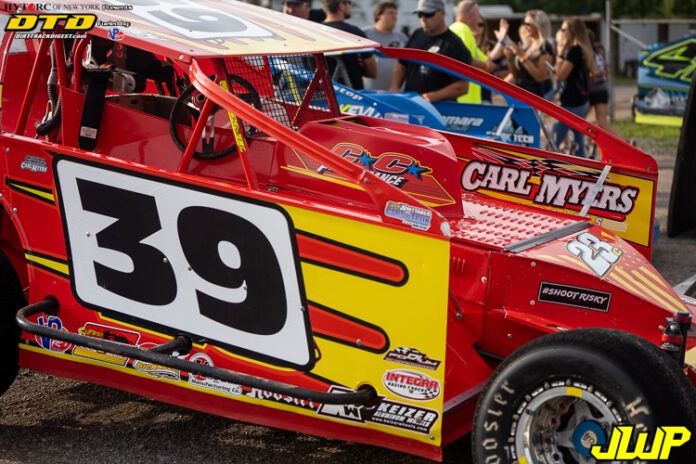 The racing world was saddened earlier in the week with the loss of long-time racing supporter Carl Myers of Sweeteners Plus fame. Myers was instrumental in aiding the careers of Vic Coffey, Tim McCreadie and several others. Most recently he assisted the career of Vic’s son Kyle.

Thursday night Kyle had a career night with the Super DIRTcar Series. Kyle earned his first ever fast-time award, won his heat going away before finishing fifth in the 60-lap feature. His heart was heavy, but racing is what Myers loved.

“It was a long week,” said Kyle. “I woke up this morning and I just thought about getting to the track. I knew once I got here, I was going to be alright. This is his (Myers) gig. He loved to do this stuff. It was basically on my mind all week, just get to Thursday and everything will be alright. He was definitely with me out there tonight. I was just trying my best to get up there to get that win. It would have been nice to get a win, but a fifth place with the Super DIRTcar Series is nothing to be upset about.” 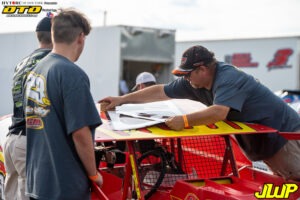 For the night’s action, the team changed the number on the car from Kyle’s No. 23 to a 39 in honor of Myers. The number was made famous by Myers during his boat racing days.

“The only thing that was on my mind going into this week was getting that number on the car and representing Carl,” said Kyle. “He’s done a lot for me and he’s done a lot for my family. He’s just somebody to look up to for anybody out there in the world. He’s going to be missed by a lot of people, especially me.”

Coffey, who competes weekly at Land of Legends, turned in a lap of 17.676 in time-trials. He was about two-tenths quicker than the next three fast timers in their groups.

“That was pretty cool,” he said. “With how fast the track was, I knew we were early on with a lot of other cars behind us. I figured the track would track up a little bit, but a couple of tenths faster than everybody, it was just pretty cool to see that. We came out of the gate fast and I just knew I was going to try my best just to win everything tonight.” 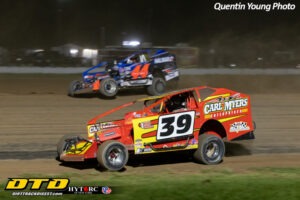 Coffey started the race off third, fell back at times, but he utilized restarts to get back to the front where he finished in fifth. A restart with only a handful of laps allowed him to put moves on Marc Johnson to race his way back into the top five where he stayed over the final few laps.

“The car faded a little bit,” said Kyle. “I got up in the rough stuff there on a restart and I lost like three or four spots right there. I was just kind of biding my time after that. I figured somebody might do the same thing. A couple of restarts at the end definitely helped. This car was really good through the middle there on restarts and I could get guys by trying to beat them getting down into three. I was able to get by Marc Johnson doing that there at the end.”

It was a great finish for Kyle and the team, but more importantly, he was able to honor someone that meant so much to him and his family. That’s what mattered most when the final checkered flag fell.