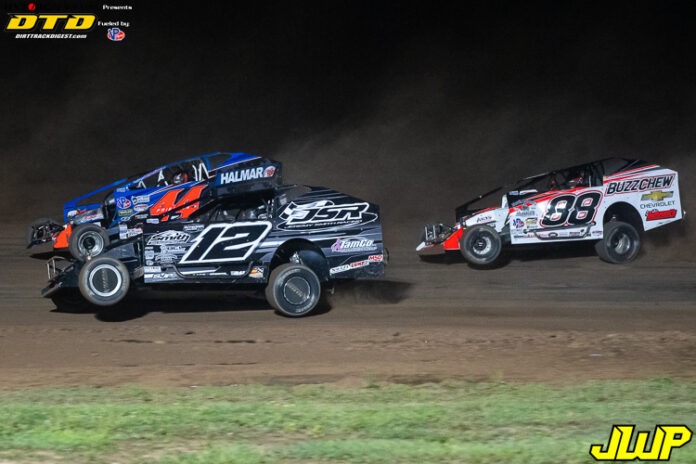 SummerFAST provided a few surprises and one of those might have been the performance of Big Block Modified Super DIRTcar Series rookie Darren Smith.

He jumped into the deep end of the pool this year and when asked at Weedsport what the tour has been like for him, he smiled and said, “We’ve struggled. I’m learning a lot running against such a competitively stout field. It definitely has helped me prepare for my weekly tracks and I’ve gotten better with two wins at Thunder Mountain.”

His dad Jeremy Smith has always been mighty competitive in the Southern Tier of New York State and even after his career branched out.

However, Jeremy is on the sidelines supporting his children in doing what they love.

For son Darren it’s the world of Modified racing.

While his dad can give him some direction there is another legendary mentor who has made a tremendous difference in Smith’s racing exploits.

That mentor is none other than Hall of Famer Billy Decker.

Darren said, “He just brings so much knowledge. When we go to a track I’ve never seen or been at he definitely points me in the right direction. He helps me drive the track and learn what I need to know about the track. I’ve improved a lot and it’s because of him.”

So SummerFAST was scheduled to be an intense four nights of racing action and the Smith team committed to compete.

Smith’s best performance came at the Land of Legends finale.

Darren said, “The first time we went to the Land of Legends we hurt the motor when we were up there earlier this year.”

Of SummerFAST, he said, “We had a lot of fun this week. I learned a lot, got some laps on tracks that I don’t have a lot of experience with.”

On Thursday night he traveled into a new area as he explained, “Being in the draw is always a big thing and it is where you want to be. I was very happy with that as it was my first time in a Super DIRTcar redraw. We made some good adjustments on the car and had fun.”

He was able to finish third behind Kyle Coffey and Adam Pierson in his heat to gain third place and a spot in the elusive redraw.

At Canandaigua, Darren Smith started fifth, but fell to a 12th place finish.

The week started out at Weedsport with him winning one of the two consolation races which resulted in him starting side-by-side with his team mate Billy Decker.  Darren was the first car a lap down at the finish with a 16th.

He finished fifth in his qualifying heat at Brewerton and ended up 19th overall.

However, despite not finishing in the top ten either night, Smith and his team made strides in a positive direction as he continues to battle as a relative neophyte on the Super DIRTcar Series.