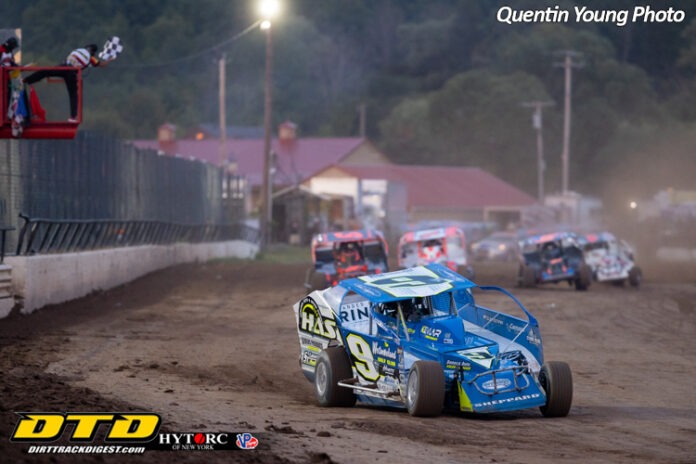 Another day, another dollar.

In Matt Sheppard’s case, that’s another $7,500 in his pocket after the finale of SummerFAST on Thursday night at the Land of Legends Raceway.  He took the win and the inaugural championship.

Just like Tuesday night at Brewerton Speedway, Sheppard returned to a track that he has a lot of history and he led the entire distance after drawing the pole. Weedsport was the sole blemish on the week where he finished third after starting 11th.

“These are two tracks I got a lot of laps at and I drew good numbers both nights,” said Sheppard. “Obviously, we’ve had a good race car and that certainly helps. Weedsport the opportunity was there, we just weren’t good enough, plain and simple. But still, when you feel like you have an off night and your off night is 11th to third, like I said last night, it’s still not too shabby.”

Sheppard began his racing career at the Ontario County oval and it was evident by the following that was with him on Thursday. He had friends and family from all of the area in attendance to watch him complete the week.

“It’s always nice to win at Canandaigua,” said Sheppard. “I grew up coming here. My dad had the booth tonight with his business, Dave Rauscher is a close friend and they had that booth. Honeoye Auto Parts used to sponsor me when I was a kid here. Obviously, a lot of family and a lot of friends are here. My aunts came to their first race of the year and my uncle’s here from Ohio. It’s really cool to win in front of them. Also had a lot of friends come out for the week. It’s a good deal for everybody.”

Land of Legends Raceway presented drivers with a much different surface than expected. Typically, the track is slick from the bottom to the top. Mother Nature decided that wasn’t going to be the case on Thursday. Thunderstorms rolled through the area mid-day and left the track saturated. That resulted with a heavy cushion all the way around the corners.

“This is like the old days,” said Sheppard. “It kind of reminded me a little bit of OctoberFAST when they did it and they had that rain delay that time. It was definitely a little bit different animal. This is more of a spring-time, fall time Canandaigua. I don’t know how it was behind us, but it seemed pretty racy. It was definitely hammer down. People want to see grip in the track and they want to see big-blocks stand on the gas, they got to see it tonight. Was the race any better? Probably not, but they got to see it.”

The biggest challenge all night for Sheppard were restarts. The 60-lap affair had a couple of rough patches with multiple restarts. Sheppard restarted in the middle with Adam Pierson flanking him down on the bottom the speedway. Each green flag, Sheppard was able to keep the lead without pressure.

“I had a good launch and it’s nice to race with someone like Adam,” said Sheppard. “Adam respects that the leader fires first. There’s a lot of guys you race with that don’t really seem to care about that too much. It seems like some of the guys that have been around a while, they get it because they’ve been leading races and they don’t want it to happen to them. Adam was just a really good, clean racer and he’s getting better and better. He’s definitely paying his dues and people are noticing.”

Adam Pierson started second in main and finished second in the main. It was his best Super DIRTcar Series finish of the season and his second top five of 2022. Pierson took advantage of the extra bite in the track.

“I’m wicked happy actually,” said Pierson. “I can’t thank Adam Gage enough for all this stuff for the big-blocks. We are getting better and better, but we still have a lot to learn. Tonight, the track kind of was in our favor a little bit. It had some grip and it was hard to pass. We qualified good, drew good for the redraw and I was hoping to have a good run.

“I can’t thank my cousin Chris right here. He does a lot for team. Adam Gage (car owner), Ben Gray and my wife Shawna. It’s my anniversary today and she’s home. It’s pretty cool to come out here, Vermont people, and run with these guys. It’s pretty awesome.”

Early on Pierson tried to keep Sheppard’s pace, but he was in a league of his own. He eventually settled into the second position and elected to run his own race.

“I was trying to keep up and get on Matt’s bumper, but once he started slowly pulling away, I was like, ‘Nah, I’m just gonna try to try to do me,’” said Pierson. “He actually showed me the line in three and four. We were just off the bottom and that was a lot better.”

A second place finish will boost anyone’s frame of mind, Pierson is no different.

“We needed this,” said Pierson. “I thought most of the year so far, we’ve been okay. It’s just that we struggle with some things. This right here is definitely going to step up the bar a little bit now to get better.  Hopefully this is just a good omen and we’ll keep it rolling.”

Behind the leader, restarts were a bit scary as everyone was looking to get as many positions as they could. Mat Williamson was in that fracas for much of the race. He ran as high as third and fell back out of the top five at points. At the end, he finished fourth. The very same spot he finished on Tuesday night at Brewerton.

“Obviously, we faded there at the beginning and the middle of the race, like lap 30ish, I felt like we were rolling on the top two cars,” said Williamson. “That one restart hurt me when the caution came out, we were probably in fourth I think from eighth. I got by Stew and everybody on the restart and then caution came out and they put us back. That hurt us a little bit. You had to work really hard to pass cars and we certainly made the steps in the right direction to be there.”

Admittingly, Williamson hasn’t had the best of luck or the finishes he’s wanted at Land of Legends. He may have been one of the few in the pit area smiling when weather rolled through the area knowing that the track was going to be on the heavier side of things.

“I was excited about it because typical Canandaigua is so hard for me to hit the setup right for me,” he said. “We’ve never really run great. I think we’ve finished second, third and whatever, we’ve just never been good enough to win. When it gets like this, I felt like we had a shot at beating the nine (Sheppard) and we were good. We just didn’t get the right things to fall our way tonight. Some cautions came out when we needed them, some cautions should have come out a lap earlier, but it was a good run.”

Heat races started at 8 p.m. after extended track preparation due to afternoon rain…Alan Johnson was running in a qualifying position in his heat when he broke a rod in the motor…Larry Wight only got one lap in time-trials after spinning on his second lap. He was still the fastest in his group. He went on to blow a left rear tire late in the feature while running in the top five. The tire was changed and he returned to finish 10th…Erick Rudolph was impressive in the feature, charging from 22nd starting spot up to seventh…It was a tough night for track regulars Peter Britten, Tim Fuller and Justin Haers. Britten finished 16th with Fuller 23rd while Haers failed to make the feature.