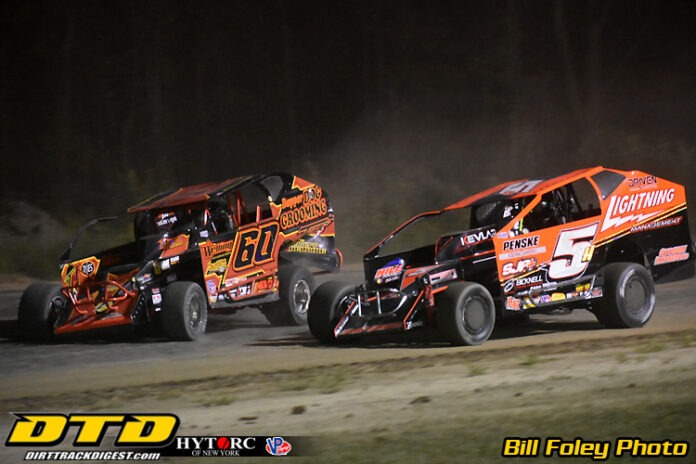 Nineteen-year-old Jackson Gill has had some bright moments in his big-block Modified this year, but on Friday night he really shone brightly in driving to a runner-up finish in the 35 lap main event.

On the 13th lap restart he went from fourth to first and set up an instant classic style run with eventual winner Chris Hile. The duo went toe-to-toe, lap after lap with Hile glued to the bottom and Gill taking the high side the entire way around and was nearly perfect as the 60 powered out of four and stuck lap after lap in turn one.

He explained, “This was the first night I have ever led a lap in the feature and hopefully we’ll have a few more.”

That key restart on the 13th lap saw Gill up on the wheel as he said, “All I was trying to do was get away from the 11T. That really put a kick under my ass.”

He succeeded in the goal and went in front.

However, Hile went by on the 24th only to see Gill lead the next two laps and finally on lap 27 the current Brewerton point leader went to the top and pulled away slightly for a 1.184 second victory.

Jackson said, “I had a really good feeling going into tonight. I was able to put it in the right position. We had struggled during SummerFAST and were just trying to find a way to get the car back on track. “

Action throughout the final half of the race was intense.

Looking back, Gill said, “I was able to carry momentum and when I saw the 5H under me I began to push my lane down a bit. I was still able to carry my speed. However, he got too far ahead after he passed me and I couldn’t do anything.”

The race ended and Gill pulled up behind Hile on the frontstretch, unbuckled, climbed out and went directly to Hile. The teenager extended his hand in congratulations, received a hug from Chris’s wife Katelynn and headed back to his car.

Many younger drivers might not have acted in such a classy manner after being so close to their first big-block Modified victory.

Standing alongside his car pit side, he told Dirt Track Digest, “This was huge for me. It is as good as a win for us. We were a lapped car up to the middle of the year.”

However, Gill underestimated his accomplishments as he is now sitting in ninth in the point standings with five top five finishes.

His second was obviously the most noteworthy.

Jackson summed up the night by simply saying, “Maybe this will help me sell some more t-shirts.”