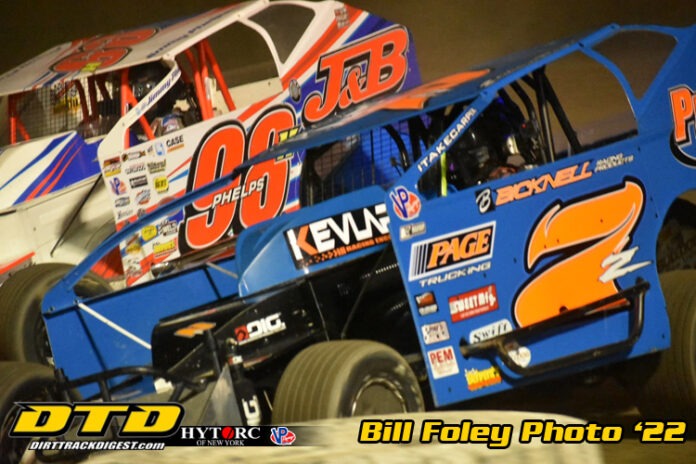 ‘The D-Shaped Dirt Demon’ is one of the toughest tracks to chalk up a big-block Modified victory, but just a couple of weeks ago a rookie celebrated his first feature win at the Brewerton Speedway.

Twenty-one year old Zachary Payne has just completed SummerFAST and was preparing for a regular season night at Brewerton when he took time to talk to Dirt Track Digest.

There may be some who thought Payne wasn’t a rookie and he explained, “This is my first full year in the Big Block. I ran this car six times last year at the Utica-Rome Speedway in order to maintain my Sportsman status.”

So in 2022 he jumped into the deep end of the pool at the competitive Route 11 speedway in Central New York.

Of that night when he posed for photographers in victory lane and received the wave of congratulations from the fans, he said, “I fell back to third at the start and on lap 13 went to the lead. The top went away and the bottom is where I wanted to run.”

He was seriously challenged by veterans Tom Sears Jr. and Larry Wight, but he made the critical adjustments that allowed him to win.

Was this win a surprise?

“I haven’t finished in the top five here all year. This is crazy and I never thought I would win this fast,” Zach said.

Continuing he said, “My dad (Mike) couldn’t believe it. My mom was here. My girlfriend. I just never expected it this quickly.”

The reputation of “The Demon” is that you really have to know how to drive it in order to be successful.

Payne explained, “You have to have discipline here. You can overdrive so easily. It is critical that you don’t overdrive.”

Continuing, he noted, “I’ve talked to a couple of drivers on how to run the track and they gave me funny, yet serious answers. It helped.”

Racing is such a fickle sport and Payne was preparing for a hopeful rebound of SummerFAST. 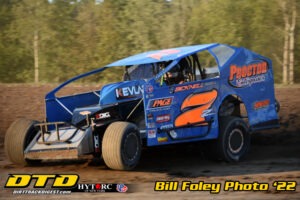 Just the night before he competed in the SummerFAST finale at Canandaigua’s Land of Legends Speedway.

Reflecting on the event, he said, “I struggled in time trials. I time trailed sixth in my heat and finished ninth. I was to start tenth in the consi and they were taking two so it made no sense. We loaded up and they came over to me and said because we were the fastest non qualified car we had a spot in the feature. I had never heard of it before. We help  Sportsman driver Tim Baker and he parks next to us. He offered me his car to get green flag money.”

Payne has already achieved one of his goals this season as he noted, “My goal was to get a win. I wanted to finish in the top five, but it is a long learning curve. Going from the Sportsman to the Modified is totally different and it is like you have to learn to drive all over again.”

Continuing he said, “I just need a lot of seat time. We are figuring that we will run at least 60 races this year.  So I guess we will get that time.”

For Zachary Payne the future is wide open and the veteran team has the ability to keep the young driver competing at a high level for years to come.