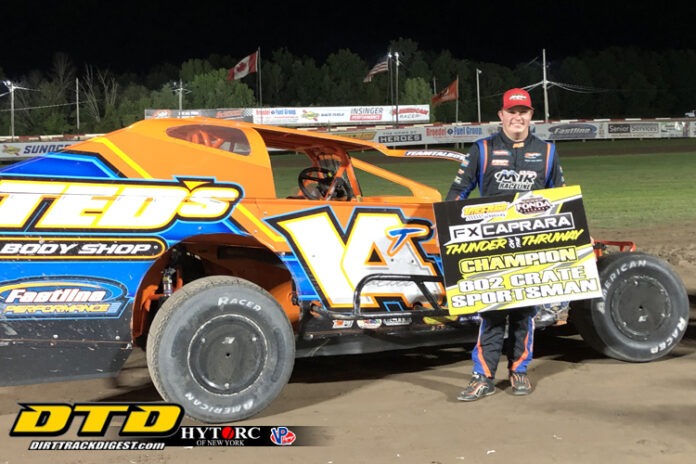 Payton Talbot now has two championships on his resume, 2022 Fonda 602 Sportsman and 2022 Thunder on the Thruway Series, and many people still don’t really know the young man that drives the No. 14T Crate 602 Sportsman at Fonda and Utica-Rome.

We spoke with him at Utica-Rome on Saturday night during the heavy rain that hit the track just as many were arriving and teams were getting ready for the night.  He is 18-years-old and just graduated from Gilbertsville High School, although he did admit he missed his graduation ceremony due to his racing schedule. He’s been racing for nine years, five years in karts and four in Sportsman.  When he began racing Sportsman in 2019 he raced at Utica-Rome and Fulton, in 2020 when Covid hit he traveled to CanAm, Land of Legends, Utica-Rome, Albany-Saratoga and Fonda.  Since then he’s concentrated his efforts at Utica-Rome and Fonda and it looks like it’s paid off.

Payton attributes consistency as the factor that most affected his winning both titles and that same consistency and five wins has put him second in points at Utica-Rome, 28 points behind Matt Janczuk who is certainly the man to beat in the Sportsman division.

In looking at Payton’s stats for this season thus far he’s had three wins at Fonda and 16 top fives in 18 events.  At Utica-Rome he has five wins, 14 top fives in 16 events.  In the total of 34 events Payton has been in the top ten for every show.  That’s one impressive record and it’s not over.

With his high school graduation now in the books he says he will take a gap year and work with Mike Walton in his Fastline Performance shop and then look at UNOH in Ohio next year.

Payton has a dedicated team that travels with him whenever possible, his dad, Tyler plus Todd Talbot, Henry Quinn, Ed Wilson, Bob Wing and Jason Wust.  And of course any team that is racing today is dependent on sponsors and Payton’s car is adorned with many, Ted’s Body Shop, Fastline Performance, DIG Shocks, Precision Hydraulic & Oil, LLC Construction, Certified Auto, JK Sign Works, Training Tails (dog day care and training), and Parker Excavation.

Congratulations to the 50/50 sellers at Utica-Rome on Saturday, $4,704 is a remarkable number and we know the crowd was huge and the sellers did an amazing job of selling and it’s a lot of walking because it’s a big pit area besides climbing up and down the bleachers.  Amazing and thanks ladies for all your work throughout the season at both Utica-Rome and Fonda. 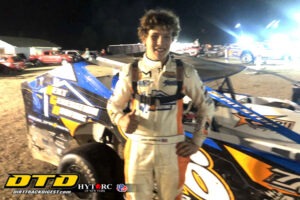 While following this sport we have heard and seen many different paths racers follow.  Sunday, walking through the pits at Glen Ridge we stopped to speak with one very talented young man, Derrick McGrew, Jr., driver of the No. 26 in the Sportsman ranks.  We have watched Derrick for more than a few years; he came up from go-karts where he was champion and raced all over the country and other countries.  When he appeared on the scene with a Limited Sportsman people were not surprised. From Limited Sportsman he moved to 602 Sportsman and then Modifieds.  He 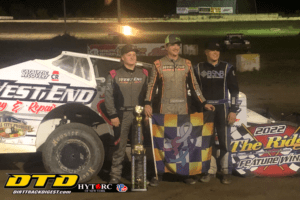 drove Modifieds until recently when he lost his only engine that he had for the Modified.  He had to make a decision, return to the Sportsman or walk away from the sport. He decided to drop back to Sportsman so that he could still race and keep his skills sharp until the day he can move back to Modifieds.  If someone would like to help Derrick back into a Modified contact the team, he is a proven winner.

The DIRTcar Series for Sportsman was at Glen Ridge on Sunday and the Buff boys of Colonie finished one, two, three in the main event.  Andrew Buff was the winner, followed by Justin and Zach. 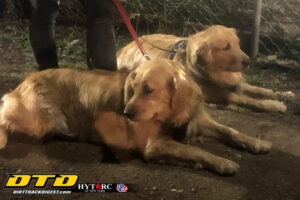 While the Buff brothers were doing what they do best, there was a young lady standing near the fence with two beautiful and well behaved dogs, Bristol (the father) age six and his daughter, Summit, age two.  With those names where else should they be when the Buff brothers are racing and besides we think Bristol and Summit may be the lucky charms for the Buffs. 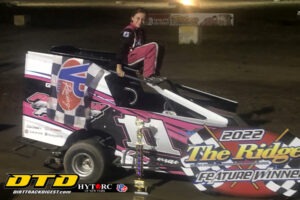 year-old from Cobleskill picked up her first career win in her rookie season in JR Slingshots after just eight starts.