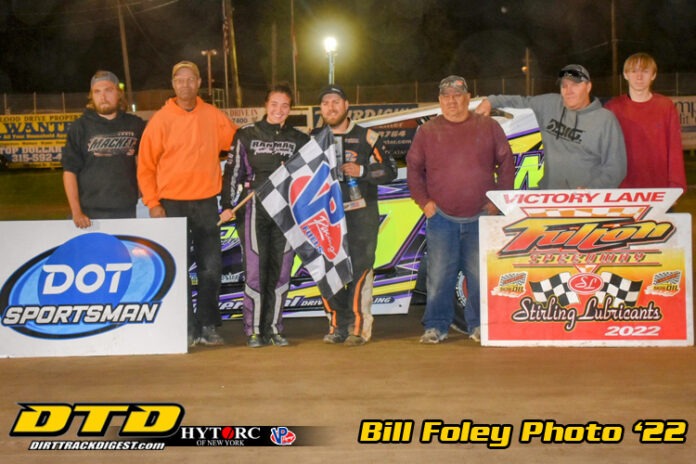 As an announcer, meeting new drivers was always fun. You see the innocence, the excitement, the anticipation and every one of them has a  story. In many cases…a dream. 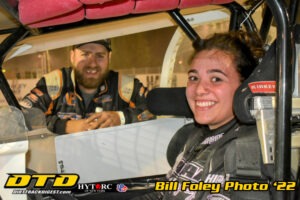 Such was the case when teenager Bailey Groves showed up at the Fulton and Brewerton Speedways several years ago.

However, not every story has a happy ending.

Suffice to say, it took several years, but Bailey Groves did finally achieve that happy ending at the Fulton Speedway on Saturday night.

Groves had a night she will never forget.

She started out by defeating Kearra Backus by 2.3 seconds to win her heat.

Her dad must have had a feeling that Saturday night was going to be special as Bailey said, “Honestly, I was having a panic attack on the way to the races because my dad said ‘it would be nice to win a heat race’. It sent my stress levels through the roof.”

So it was on to the feature event and there she was starting on the front row.

Anticipating the 25 lapper, she said, “I don’t think I really had any expectations heading into the feature. I just wanted to drive like I did in the heat race and not overthink it. At lap 12 I looked up at the board and was just dead tired. The track was super rough. I started to watch when the cars behind me crossed the line and lit up the board. I realized I could take it easy for a few laps.”

Continuing, Groves explained, “I realized I could take it easy for a few laps, but just needed to collect myself. The last five to ten laps I just focused on hitting my marks and being smooth.” 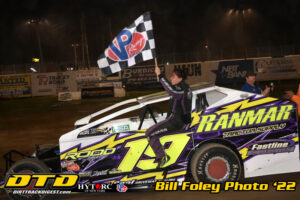 The checker flag flew and she was 1.5 seconds ahead of a rapidly moving Kyle Devendorf.

As she stood in victory lane she looked at starter Ricky Breed who had delivered her first checker flag and said, “I’ve never done this before. What do I do?”

Reflecting on the moment of victory, Bailey said, “I honestly didn’t know what to think. I have an awesome group of people that support me and work on the car. I couldn’t really believe the car handled as well as it did all night long.” 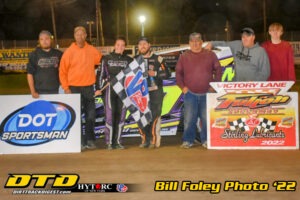 She recognized many people involved with her racing as Bailey said, “I could never do it without my parents. I have to thank my dad and Wade for bringing the car back to Mexico and maintaining it every week. Chris, Bernie and Lonnie for housing the car and everything else they do for me. All my sponsors, Fastline Performance, Donath Motoworx, Jerome Fire Equipment, MSA Safety, and Tom Juno at Power Seal for helping us for the past three years and Check 6 Paintball.”

Bailey Groves has been sort of hit and miss over the past few years.

She had started when she was in high school at Mexico where she was an all star lacrosse player. Her ability ended up with her getting a D1 ride to Siena, but unfortunately she suffered a career ending knee injury.

Looking back, Bailey explained, “I’ve raced on and off for about 10 years and had no intentions of racing this year, but we’ve been bringing the car in case Chris (Mackey) needed it for a back up being in a tight points battle. I cut back because I really wasn’t in love with being in a race car anymore. I also picked up officiating girls lacrosse which has become something that takes me away on weekends for high profile lacrosse tournaments.”

Continuing, she noted, “In the past three years I’ve only raced maybe 15 times total.”

Throughout the final Sportsman feature of the night Groves, in only her fourth appearance of the year at Fulton and ranking in the area of 50th in the point standings ,was leading from the front row.

She built up a comfortable lead, but early on Tim Garreau was right on her bumper until an electrical problem dropped him to the infield along the front straight.

As the race wound down Ted Clayton and Kyel Devendorf were inching their way closer and closer toward Groves.

However, at the checker it was a 1.5 second victory for the first time winner.

The response in the days after the emotional first win was interesting.

Bailey said, “I think the biggest thing the majority of people have said to me is that no one was surprised because my driving abilities are there. I’ve just always been in my own head and doubted myself.”

Well, it appears Bailey Groves no longer has to have that doubt as she finally chalked up that first career Sportsman victory.