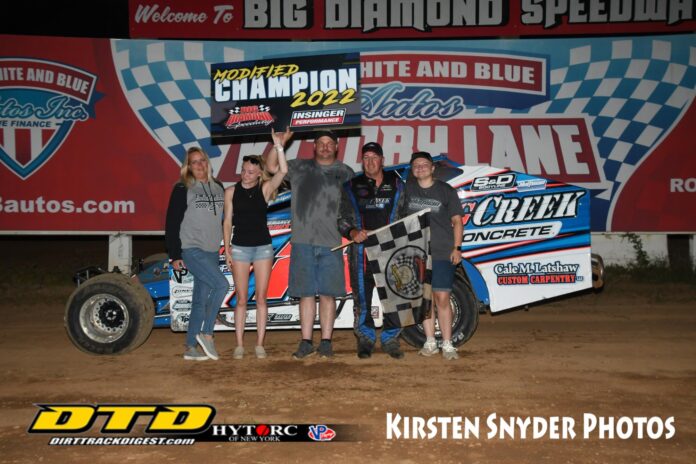 Two years ago, Butch Getz ventured into the ranks of car ownership at Big Diamond Speedway when he provided a car for Jeff Strunk who at the time had blown the engine on the Glenn Hyneman No. 126. Strunk, who called Getz to see if he could borrow a motor, ended up getting the whole car and proceeded to win three features that season wheeling the No. 15G including the 2020 Prelude to the Coalcracker. While Strunk was driving for Getz at Big Diamond, Getz himself was driving one of his cars on Friday nights at Penn Can Speedway where he won his only feature event as a driver.

At the end of the 2020 season, Getz decided that his driving days were over, and he would transition himself to the rank of car ownership. Duane Howard who had parted ways with the No. 357 Norm Hansell ride at the end of that season was hired by Getz to be the new driver of the No. 15G for 2021. The team was potent and ended up with four wins on the year and just missed winning the 2021 track title at Big Diamond when Timmy Buckwalter edged Howard out on the last night.

The Getz Motorsports team strengthened itself over the off season and came back to Big Diamond in 2022 with a goal to lead the track in wins and win the championship. Well after last Friday night, Getz can say mission accomplished as his driver Duane Howard drove the perfect race in the perfect car to take the big win and by doing so was crowned the 2022 Insigner Performance Modified champion.

“We have had a rocket here all year,” said a jubilant Getz in the team’s hauler after the night’s race. “If it wouldn’t have been for that rollover we had earlier in the year, we would have sewn it up last week. Duane did an awesome job tonight and like I said to him, you have to win the race and let the cards fall where they fall. We ended up winning the championship and that is awesome.

“I just want to thank all of our guys that help us out, this is grueling to do. Two nights a week, sometimes three nights a week and it really wears you down. Everybody is tired and if you don’t win you feel miserable, but we kept at it and worked hard, and tonight was our reward.”

The No. 15G that Howard drives has been dialed in all year at Big Diamond and Getz confirmed they are not done winning races and championships in 2022.

“Duane has been spot on all year here and this car has been spot on all year, ” mentioned Getz. “This car just works on the bottom so well here and Duane knows how to get it done. This is just awesome! I want to say right now that we are coming back again next year and staying together. We will be coming back here to Big Diamond on Friday nights. Saturday nights we don’t know what we are going to do yet, but we will be back next year and hopefully Duane can win his tenth track title.”

The motor in the Bicknell No. 15G is a Billy the Kid Performance powerplant and is the same motor that propelled Strunk to his three victories in 2020 along with Howard’s win last season and seems to really excel when the big money is on the line.

“This is the same motor that Jeff (Strunk) used in 2020,” explained Getz. “I bought this motor from Billy the Kid, and it is a motor that Demitrios Drellos used to run, and this motor has definitely paid for itself two or three times over. This is a good piece that Billy the Kid built, Duane loves it, and Jeff loved it. After the Coalcracker next week, it is coming out and getting refreshed one last time for 2023.”

Back in April, Big Diamond had a couple of weeks where the track was not perfect but with hard work put in by owner and promoter Jake Smulley, the track surface has been nearly perfect ever since and Getz wanted to make it known how happy he and his driver have been this season at Big Diamond.

“Last year it was a little harder to pass here but Jake and his staff have done a great job with the track all year,” cited Getz. “You could come from the back every week which was awesome, and I can’t say enough good things about the track prep they have been doing here all year. It has been racy all year. Hat’s off to Big Diamond, the place has been awesome this year. They pay good money, there are a lot of fans every week and I just can’t thank them enough for what they have done this year.

“There was one week earlier in the year when the track wasn’t very good, and a lot of cars left but a lot of us stuck with it. And once a car leaves it is hard to get them back no matter if I talk to them, Duane or Craig (Von Dohren). Once they leave because of a rough track, they tend not to come back and that’s a shame because this place has been racy every week for at least the last eight weeks. Hopefully they will decide to give it a shot again next year and get a lot of cars here. The track deserves it, Jake deserves it. He puts a lot of money into making the track better and hopefully he will be rewarded for his efforts.”

The Getz Motorsport team is a family effort. Butch, his wife Robin along with daughters Danica and Kailyn are all involved in the racing operation in one way or another and you can tell the Friday night just how proud Butch was of his family.

“It is really neat to have them all involved,” mentioned Getz. “Danica helps on the cars and has started driving a car herself, Kailyn has her vlogs and it’s pretty neat to have them all helping out with different things. This is a second job, but I love it and we are all a family here. I know Duane loves it, we work hard at the track and in the shop but have a lot of fun as well.”

The team has the equipment to travel but with job commitments for both Getz and Howard along with the crew, it just is not in the cards for right now.

“We would like to travel more but it is tough with my work (owner of Big Creek Concrete) and Duane’s work plus all the guys have full time jobs so that makes it hard for us to follow the Deyo stuff. I wish we could, but our Friday and Saturday night deal is our bread and butter so we will stick with that for the most part. Right now, we have three cars, four if you count Danica’s car. I will have eight motors once we get them all back, so we have the equipment but it’s the time involved that keeps us from doing it. I don’t have the time to swap motors around all of the time to make some of these other shows.”

Getz and Howard have worked hard to get where they are right now at Big Diamond and their hard work was rewarded with a track title. Going into next Sunday’s Coalcracker 72, the No. 15G has to be the favorite and both owner and driver would like nothing better than to cash that $17,000 check to put an exclamation point on the 2022 season at the Schuylkill County dirt oval.