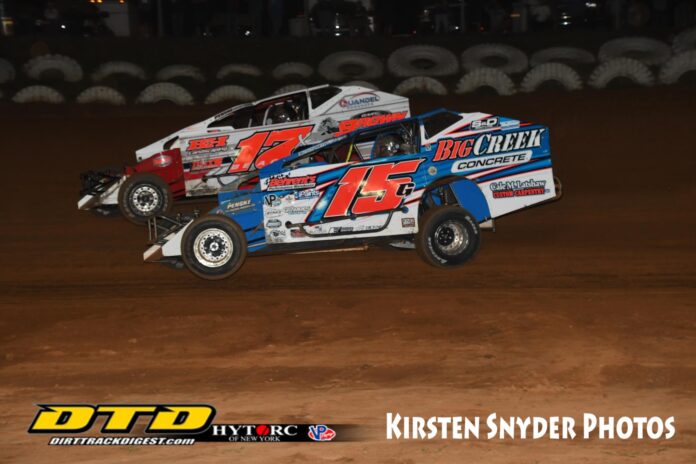 For a driver who has won eight track titles at Big Diamond in his storied career, one would think that winning a ninth track championship would not be too big of a deal but for Duane Howard that was not the case. Friday night at Big Diamond Speedway Howard showed why he is referred to as the “Diamond Cutter” as he cut his way through a strong field of Modifieds to win his 89th career Big Diamond feature and his track leading ninth track title. In victory lane and post-race in the pits, Howard acted like he had just won his first title.

“You know what winning nine titles means? It means I am getting old,” said a happy Howard afterwards enjoying himself a nice cold adult beverage post-race. “What it really means is that I have been around a long time and have been around good teams.”

Like Howard mentioned, he has driven for some very good teams over the years and this year was no different driving for the Getz Motorsports team headed up by team owner Butch Getz. Somehow, this title seemed to mean more. This was year number two for the Howard / Getz team and winning the title for Butch was very special for Howard.

“This was very special to get this championship for Butch (Getz) and his family and for everyone else who is involved,” explained Howard. “The last two years have been fun for all of us, there is no bickering, no fighting. If we have a bad night, we might be upset, but come Sunday or Monday we talk about what we did wrong and that’s nice. The only pressure we have is the pressure we put on ourselves, not from the team owner or anyone else.”

Local dirt racing and racing in general has always been a family-oriented sport and you can see that throughout the pits and in the grandstands and the No. 15G team has that same family feeling.

“The way our families mingle and get along makes this the perfect situation for me,” mentioned Howard. “From my brothers to my nephews and everyone that is involved with Butch is just special and to win a championship for all of them is really special. The Getz family are such good people. They give me everything I need, and it there is something I think we might need; it is there the next day. Butch and everyone involved is just dedicated to winning and getting it done.”

Coming into tonight, Howard knew what he needed to do to put himself in position to win the title but ultimately knew that might not be enough.

“We knew coming into tonight that we had to win and then let the chips fall where they may,” commented Howard. “Our goal coming into tonight was to get better in our heat race and we focused this week on how to do that. You know the No. 19K (Brett Kressley) was winning heats regularly and we were losing some points there, so we made some adjustments for the heat and were able to get second which was very important and to tell you the truth, I didn’t know those heat races were that important. And after that our goal was to win $3,500 tonight by winning the feature. That was our goal and what happened after that I knew we couldn’t control. If Kressley finished second or third and he pulled it out, it wasn’t meant to be, but we were able to come out on top.

“This car just rotates the bottom in the corners like no car I have ever raced here before. Tonight we had to wait until the track came to us, there might have been a little bit too much moisture there when we started and the No. 19K got in front of me but the way this car takes off after lap 14 or 15, we are good to go and I think this car is the only car here that can rotate the bottom this well and we have so much speed down there. I knew if I could stay out of trouble early on that the track would come around and we would be hard to beat, and you could see it in those last five laps just how good we were.”

Talking to Howard over the years, he is a different driver when he has confidence, and this car gives him that when he pulls into the pits at Big Diamond.

“Ken, you are so right and when I am confident, I can be a little dangerous,” said Howard. “When I walk into the gate here at Big Diamond, I feel like I have the best car out there, I really do. When I walk into the gate on Saturday night, I feel like a rookie that has no laps at Grandview except that I have like a million laps there at Grandview and I just can’t figure it out. But walking in here, we have such a good package and I have such a good liking with running the bottom here that I know someone has to be really good to beat us. I don’t like to move off the bottom here and to be honest when I have to, I struggle but the package we got here is just perfect to run around on the bottom.”

At 58 years old and driving for as many years as he has, one would think the fire and desire to compete would start to wane but for Howard he still has the fire in his belly to get the job done.

“I still have it and you know winning the feature and winning the points on the same night doesn’t usually happen a lot,” explained Howard. “I think we might have done that once at Bridgeport years ago in the No. 126, it is always special to win and to win the championship on the same night just makes it that much more special.”