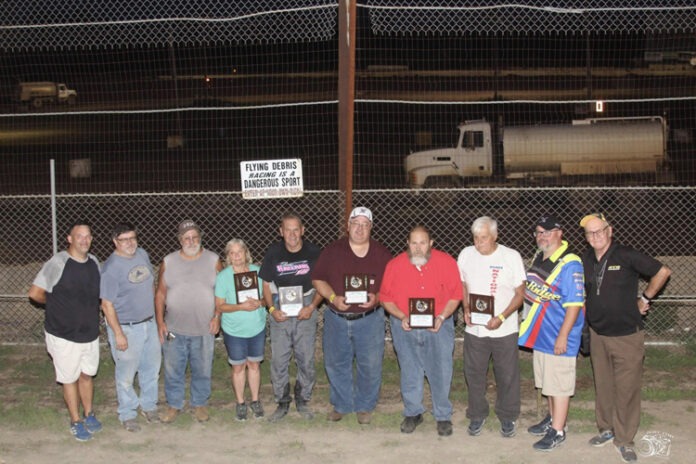 Our in person racing this past weekend was at Glen Ridge on Sunday and along with a full card of racing the Hall of Fame inductions were held during intermission.

Members of the 2022 Hall of Fame class were presented to those in attendance by track announcer, Toby LaGrange and the first one to be honored was Frank Blanchard a former teacher at Gloversville High School, “Mr. Blanchard” taught many of the same people he competed against during his racing career.  His stats show five wins between Sportsman and Vintage, and he was the first Sportsman champion in 2004.

The Demitraszek Family, headed by Pete and Matt took the reins at Glen Ridge to help keep it alive when the track looked to be on its way out of the local racing scene.  As car owners, officials, drivers, sponsors and track champions their roots run deep in local racing and especially at The Ridge.

A couple who is involved in a multitude of aspects of local racing are John and Georgie Constantino at husband and wife team that can do it all and has been involved at Glen Ridge for nearly two decades; track officials, water and packer truck operator, scorer and anything that needs doing, John and Georgie are there to help.

Bob Lansing is just one of those guys who can do it all and probably has at Glen Ridge in the years that he has been there; cleaning, track packing, running the concession stand, announcing and let us not forget his chosen profession, photographer and he’s a great one and always willing to accommodate a fan or driver with a photo to preserve the history of racing.  He’s done local radio for racing and always had his heart in the sport and with the fans and competitors.

Danny Ballard is one of the original “Grand Gorge Gang” members and has kept that camaraderie alive throughout his racing career.  Danny has raced in many divisions throughout his career and his stats show that he has 17 Pro Stock wins at Fonda and was track champion in 1994.  He was IMCA champion in 2002, 2004 and 2006 at Fonda and has 27 wins.  After taking a bit of an hiatus from competition Danny found a home at Glen Ridge in the All Star Slingshot division where he has 25 wins and was champion in the division in 2020 and 2021 and looks to be headed for another title this season. 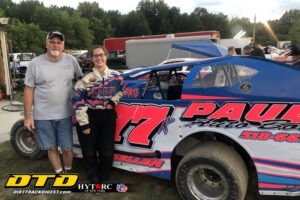 Beyond the Hall of Fame festivities there was plenty of racing at The Ridge on Sunday. During our normal walk through the pits we spotted the No. 77 Sportsman driven by Kathy Bellen of Mayfield.  Kathy has been behind the wheel of one thing or another for many years.  She climbed into a go-kart at age nine and stayed with that until she took a ten-year hiatus from racing.  She returned to racing in 2015 starting with a mini-sprint then moving to Sportsman the past few years.  A bone-jarring crash in the mini-sprint prompted her move to Sportsman, encouraged by her mother and mothers always know best.  Kathy’s dad, Don, does much of the work to get her to the track and when she’s not at the track racing herself, she is crewing for her daughter, Khloie who races at area go-kart tracks.  The Bellen family loves what they do and do it together.  They are the backbone of our sport. 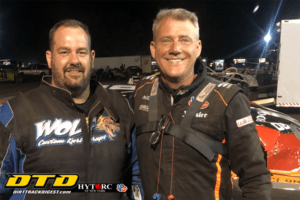 Sometimes drivers travel great distances to race at The Ridge and on Sunday we had a visitor from Charlotte, N.C., World Racing Group, CEO, Brian Carter came to compete in his bright orange No. 6.  He comes to the local tracks occasionally during the season  and gains perspective on our local racing that wouldn’t be possible without being behind the wheel.  On Sunday he was seen talking with popular Pro Stock driver, Luke Horning.  I wonder who was giving who racing tips?

This weekend is a big one for racing with Friday being championship night at Utica-Rome and Albany-Saratoga, Mr. Dirt Track USA at Lebanon Valley on Saturday and the New Yorker at Utica-Rome on Sunday.