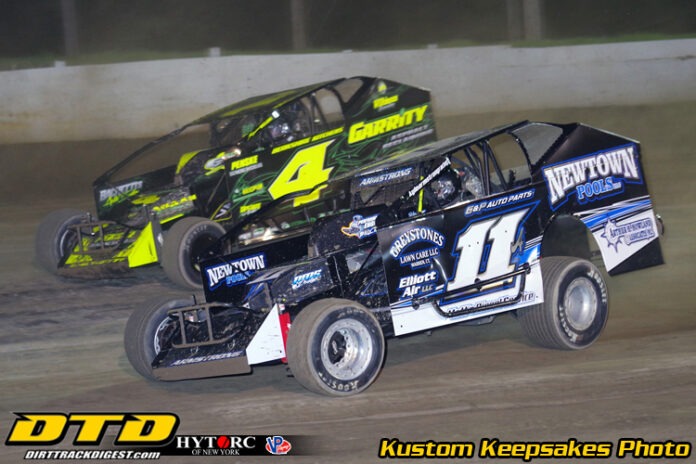 Coming into the final night of points for the 2022 modified division, it was a foregone conclusion that Andy Bachetti was the 22 champion. In late May, Bachetti was the class of the field in the 1st of 2 Mr. DIRT events at Lebanon Valley only to have terminal transmission problems that sidelined him from a $13,500 payday.

Fast forward to tonight, the annual Mr. DIRT Track USA event at the Valley where a whopping $25,500 to win prize awaited one of the 26 competitors in the field. As if the script was played again from May, Peter Britten was on the pole to start the 100-lap affair, the same as he was in May.

From the drop of the green, pole sitter Peter Britten blasted out to an early lead with “The A-Bomb” Adam Pierson right in tow. It took only 12-laps for Britten to hit lap traffic.

With 20 of the 100-laps on the board, it was Britten and Pierson setting a torrid pace with Andy Bachetti up to 3rd from his 8th starting spot. With 30-laps completed Bachetti began to ratchet up the pressure for position. He would run the extreme low side of turn two while pressuring Adam Pierson for second.

While the top runners were having a tug of war for the lead, “The White Knight” Marc Johnsons’ night came to an abrupt end on lap 34 when the read end failed. Johnson was in the top five from the drop of the green from his 4th starting spot.

With 35-laps in, the top three where under a blanket. Someone was about to make a move That move was from Adam Pierson who was in a dog fight for the lead but when the lap counter hit 40, Piersons’ night was done with mechanical failure while running second to race long leader Peter Britten in the 21A.

Bachetti took command of the lead from Peter Britten with 41-laps on the counter and set sail on his quest for the $25,500 payday. He wasn’t going to just run away hide. He soon would have company from Keith Flach. Flach started the race in 5th and kept an early steady pace with the leaders. Minding his own race as Bachetti kept clicking off the laps. Just past the halfway point on lap-51 Flach would overtake Britten for 2nd.

As if a switch had been turned on, Billy Decker, a former Valley regular in the mid 90’s, turned up the Wick on aboard his potent 91. On lap-54 Decker attacked relentlessly on Peter Britten and overtook 3rd place.

With 67-laps on the counter Keith Flach started to reel in Bachetti for the lead. While running in 5th, Eddie Marshall had his engine go flat and retired from the event one lap later on lap 68.

The race took a different look on lap-72 when Peter Britten slowed as he exited turn 2, causing Brian Berger to pile into the 21a which brought out the caution. It was this caution that Flach didn’t want to see as he was within striking distance of Bachetti for the lead. Berger was running in the top 5 at the time of the accident. A bitter way to end his final modified race of his career.

With three quarters of the event now in the books, another caution came out on lap 77. This time it was for Kyle Armstrong who had a flat right front tire. Also making a pit stop was the Halmar 44 of Stewart Friesen. Friesen came in and changed both rear tires and took on gas only to bring out the caution immediately on the next restart as his car wouldn’t go into high gear ending his night.

Out of the 26 cars that started, there as only 14 left in the field as the race resumed on lap 77. Bachetti would go on to lead the last 23 laps uncontested and score a massive $25,500 payday, putting a major exclamation point on his season. He swept the season in big-block and small block points and with the $25,500 payday, it was a satisfying victory for the Sheffield, Mass speedster.

“I’ve had engine trouble all season. I stopped going to Utica Rome on Friday’s since I was out of engines. I had the field covered here in May when the transmission gave up and tonight is redemption for that” said an extremely elated Bachetti in victory lane. “I can’t thank everyone enough for all the help in the shop, at the track, my sponsors for sticking with me. Everyone,” Bachetti added “When my engine builder told me September on my engines, he was spot on. I put my motor in for tomorrow at Utica this morning. We will be in attendance tomorrow at Utica”.

Finishing second was another Valley regular, Keith Flach. “The Ravena Rocket” has had a difficult two year stretch. In 2021 he was a man without a home. He raced at Orange County on Saturday nights and Friday’s at Albany Saratoga. In 2022 Flach missed some time at the Valley at the start of the season as his motors and cars weren’t ready to go due to work commitments. Add in new crew chief, Connor Marvin and you end up with a remarkable second place finish. His first and Keith’s first 100-lap affair of the season.
Marvin added “We prepped extremely hard for this race. Everything I could do to make sure we were ready to go was done this past week. New bearings, u-joints, brake pads rotors, pinion gears, every fluid everything was checked and rechecked three times to ensure nothing was missed. This is just an amazing night. We have worked really hard over the last few weeks and our record shows it.”

Flach was all smiles standing on the front stretch after the race.

“Connor has done a really great job on our cars. I owe a lot to him, I also owe a debt of gratitude to god. Our car started out tight at the beginning of the race. It’s been like that the last half of the year. As the race went on the car started to come alive more. It was a guessing game. We haven’t gone a 100-laps so we were guessing. I just can’t say enough about the effort Connor put in this week. Im super happy with this finish.”

“I’m a little disappointed in my heat race that we didn’t finish in a position to get into the draw. But we start deep here weekly. It’s nothing new for us. We started 14th here tonight. We had a better second half of the season here. It just came down to Andy (Bachetti) was so far out front in the early season we just couldn’t get enough points to catch him. But with the quality of this field tonight to bring it home 3rd its a great day.”

News & Notes
30 big-block modifieds were on hand for Mr. DIRT. 26 made the show.

Suffering terminal engine issues in hot laps, Anthony Perrego debuted a new car. Its a former Ronnie Johnson Bicknell that hadn’t been raced. The team scrambled to prep a back up car for the night but was never a factor and had to take a provisional to make the feature. According to a crew member a freeze plug blew out causing the engine to go south. Perrego was succinct in his comments.

“It blew up. The backup car would be better suited for a Weedsport, not a super speedway”.

If you have noticed Stewart Friesen not exactly setting the world on fire with his big-block this year, your eyes are not deceiving you.

“Our motor program was late to start the year with and we had trouble in the early part of the season and we just haven’t been able to really regroup or catch up,” said Friesen.

Friesen also mentioned that in 2023 his NASCAR Craftsman Truck Series ride may expand to two cars.

“This year we had Jess(his wife Jessica), Todd Bodine and Layne Riggs. It was a lot of heavy lifting to make that all happen.”

Friesen expects to once again be aboard a Toyota truck in 2023. “I don’t see any manufacturer changes coming over the off-season in the truck.”

Kenny Tremont is not retiring this year. “I think we will be back next year. We didn’t exactly set the world on fire this year. We had one win at Malta and a win here.”

Tremont is going to Oswego for Super DIRT Week and Orange County for Eastern States and that will conclude his 2022 season.

In a daily headline somewhere in a newspaper or television news story there are stories on labor shortages. That shortage is present in racing. Specifically, at Bicknell Racing Products. According to Randy Williamson, “We recently took possession of a robotic welder. We need welders and we haven’t found anyone that want’s to work so we have to do what it takes for our customers to have cars to race or repair.”

Also, Williamson said “Our 2023 cars are now out. A few drivers have them but none have raced them yet. We have been doing some R&D work with Jimmy Phelps, Larry Wight, and a few others. I think the teams are waiting for Oswego”.

Jack Lehner has decided to return his DKM chassis and just utilize his Bicknell.

“The car is good but its like a science project. Its putting laps on the motor, burning up fuel and wear and tear on the components. I honestly just don’t have the time to chase the car.”

Lehner will also return to the Nelson Motorsports 85 at Fonda in 2023. For the upcoming Fonda 200, Lehner will utilize his own equipment.

Shane Andrews, the voice of the Super DIRTcar Series is so loved by the fans of the Super DIRTcar Series that a sign on Route 20 east on the way to the track caused confusion to many. A tweet was sent to Andrews asking if there was something wrong or did he retire or hit the lottery. His reply was “I have some obligations tonight and will miss the race at Lebanon Valley”.

A decision on the future of Airborne Speedway, which Howard Commander is promoting, will be made within the next two weeks according to Commander.

“We want to Race of Kings Weekend to return” is a common cry from die hard fans of the former season ending event at Lebanon Valley. When asked if the 200 would return in the future, Commander said “We are short about $50,000 to host that race. We can do the $25,500 here tonight but you cannot raise enough funds to host that race from ticket sales alone. Everything is so expensive these days. I recently received a call from Tony Stewart and he was being flip when he said now why did I buy that race track again”.

3 of the top 5 cars in the finishing order utilized Bedell Racing Engines from nearby Nassau, NY. Keith Flach was one of those 3. “We had some significant delays in getting our motors back from Billy The Kid (Billy Mathis). We decided to make a change on business terms. It’s not personal. In fact, Billy still has an engine of ours in his shop and when the parts come in he will finish it. We were nearing a point with the engine situation that we were looking at missing a few races. I’ve gotten back 2 motors from Dan (Bedell) in the last few weeks. We are evaluating our late season races. Connor has a wedding the weekend of Super DIRT Week and we are just so busy at work. We are thinking of Port Royal and maybe Fulton. Its a fluid situation.”