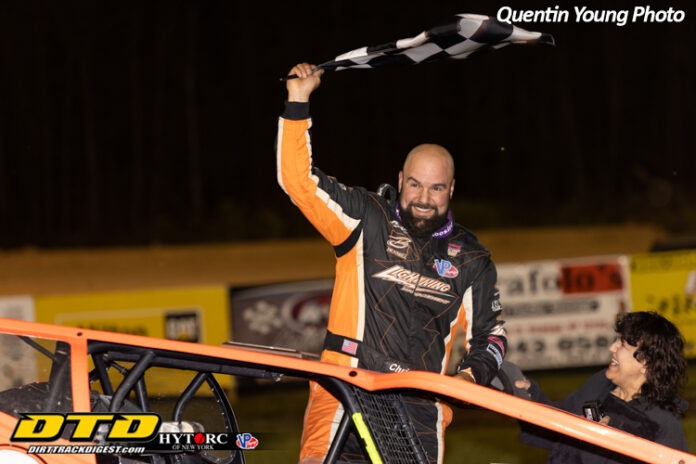 Chris Hile, the 2022 Brewerton Speedway Modified champion, stood alongside his 5H sipping a beer, accepting the congratulations from family, friends and fans and savored the moment.

Asked about how “Brewerton Speedway Champion sounds” he said, “It sounds fantastic, but I don’t think it’s settled in yet. It’s quite surreal. To even be in the running for the track championship is huge for us and to get it done is quite an accolade for the team and everybody.”

Continuing, he said, “We were lucky to finish. It was a race of attrition tonight with a bunch of mayhem going on. We were so glad to get out of here and get it done. Honestly I wish it had been green-to-checker and Larry and I could have raced it out the whole way. There were just so many yellows. I’m glad it’s over. I feel like we did 100 laps and it was the longest 35 lapper I’ve ever run. In fact, the fuel pressure gauge showed we were out of fuel at the end.

“I feel bad for Larry. He had a hell of a year,” said Chris, “Tim Sears too. To be able to run against those two guys and have it be for a track championship is something.
The race for the title was a bit anticlimactic.

Best friends Larry Wight and Hile entered the night with Chris leading by just two points.
They lined up far back in the field with the 99L one spot ahead of the 5H.

The two were making slight progress in the early going, but on the 11th lap the anticipated confrontation and run for the title came to an abrupt end.

Seconds later Larry was limping off the track and done for the night.

Chris said, “I think I crowded Larry coming off four and he got into the wall. It’s bittersweet that we had that happen, but I just tried to use up the track and it was just one of those racing deals.”

Larry talked about the situation afterwards, saying, “I got pinched into the wall and broke the rear panhard bar. The rear end was going side to side. However, I cut down a tire.”
The damage was extensive as Wight explained, “Probably needed a new torque arm, drive line, rear end and hopefully it didn’t get into the engine. I really pancaked the wall.”

However, the drama for the new track champ didn’t end there.

Moments later, looking toward turn four suddenly the oil pan of the 5H was exposed for everyone to see as he did a dragster style wheelie that could have caused terminal damage.

Chris explained, “We were lucky to finish. Coming out of four I got under the 160 (Max Hill) and maybe I could have rolled out.”

He jumped over the left rear and headed skyward.

“We broke a radius rod and the front end was just flopping around the last 20 laps or so. I don’t know how I did as good as I did, “ noted Hile.

Continuing, he said, “We got up to fourth at one point and then it really started going away. It was pure mayhem and I did whatever I could just to get to the end.”

It’s hard to believe Hile has been competing at the Brewerton Speedway as he explained, “Next year will be the 20th year for us. I’ve been in a big block for nine or ten years. We definitely have a couple of laps around here. We’ve done our time. It’s pretty cool to be in the running, but to say that we did it is simply awesome.”

Reflecting on the past, Hile noted, “Last year we finished fourth in points. We were pretty close, but it is so hard to put a whole string together. Our worst finish here this year in regular races was seventh. We’ve had a lot of luck, rolled good and especially today when the front end didn’t break. Consistency is critical for us. We had a two point gap in the last race and every position counted all season long. To string a whole season together and to do this is pretty special.”

In victory lane the “friendship” was evident as Larry’s wife Brooke was standing there in championship circle with bottles of champagne and as the Hile family, crew and others gathered for the championship photo there at the end of the line with a big smile on his face was Larry Wight.

That’s what true friendship is all about.