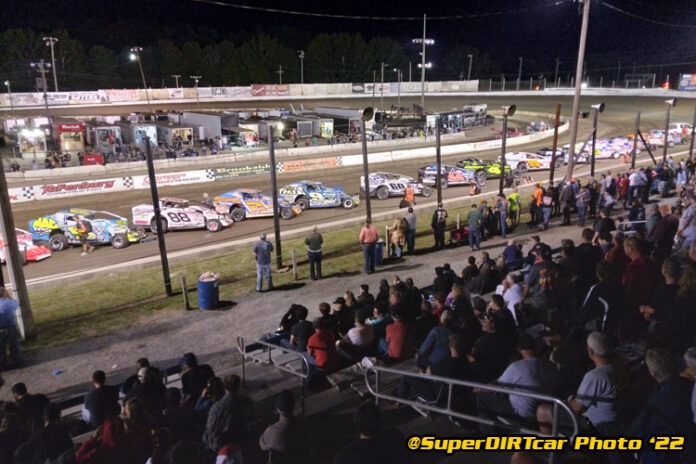 A host of storylines greeted race fans on Saturday night as the Super DIRTcar Series rolled into the Lebanon Valley Speedway. 30 cars signed in to do battle at the Valley of Speed, but the track favorites fended off the invaders as Andy Bachetti took victory over Keith Flach and Brett Haas. With Mr. DIRT Track USA in the books, only three events remain before the 50th Super DIRT Week kicks off in October.

Platinum drivers Anthony Perrego and Darren Smith pulled into the Valley with brand new race cars. Perrego’s new car for the Four-Star Motorsports team sported a black, white, and orange color scheme, looking strikingly different from the car he’s campaigned all year. As for Smith, you wouldn’t have known the car is new without getting up close. The ‘Binghamton Bullet’ sported his usual black-out wrap on top of a brand new 2022 Bicknell chassis powered by Kevlar. The team said that this car will be their big-block piece for Super DIRT Week. Smith and crew were hoping for a clean night to shake the car down and find any bugs before they get to Oswego.

It was not a good night for either team. Perrego’s journey through the night was like walking through a haunted house designed by racers. In hot laps, the brand-new No.4 went up in smoke. After showing small amounts of smoke in hot laps, the car billowed out a cloud of dark grey smoke as soon as Perrego came out of the throttle at the checkered flag. The crew frantically pushed the car back to the trailer after Perrego coasted to a stop in the pit area, but that ended the new car’s night. The back-up came out and Perrego struggled in time trials and in his heat race. The night got worse, as Perrego was collected by a spinning Marcus Dinkins in the last chance race. Perrego took his provisional and ran four laps before pulling off and loading up.

Darren Smith was the other car collected in the Dinkins melee. Smith and Perrego both had nowhere to go. Smith’s car suffered substantial front end, rear end, and body damage. Smith did not start the 100-lap main event, loading the car up to get repaired in Binghamton. The crew has a quick turnaround from tonight; Smith and teammate Billy Decker will take on Utica-Rome Sunday.

Adam Pierson’s night was perfect until lap 41. Pierson went quick time in group 3, won heat race 3, and redrew second. Pierson was battling Peter Britten and Andy Bachetti for the lead when he came off the pace and went pit side with drivetrain issues.

Pierson’s story is a unique one. A longtime sportsman and midget racer at Bear Ridge Speedway, Pierson was given an opportunity by Adam Gage to wheel some modifieds.

“We met each other up at Bear Ridge, Adam [Gage] had bought an old Dave Marcuccilli car at the time”, said Pierson. “He used to race go-karts and made the move to big cars. I helped him out for a bit, and one night he asked me if I wanted to drive a car at Malta. Eventually, he let me drive his cars as long as I put them together and maintained them. One day, I was going to Enders to pick up our crate. He called me before I left and told me, ‘I did a thing and bought a 358-spec small block.’ That got us to where we are today.”

Pierson has shown speed as of late on the tour. He finished fifth at Big Diamond in July, before racking up two top tens and a second at Land of Legends during SummerFAST.

“We’re really, really good for the first 40 laps or so,” said Pierson. “After that, we start to slide backwards. Being good off the trailer is a big deal with the Super DIRTcar Series having time trials, so it’s helped us in a big way. We just need to make our speed last all race long.”

“It’s a big track for sure”, said St-Sauveur. “The shock ended our night, but I had fun. We’ll be back for the next one!”

The unique size and shape of the Lebanon Valley Speedway means home turf advantage has a lot of sway. Five of the top ten were track regulars, with the top three of Bachetti, Flach, and Haas making up a home track lockout. Early on in the race, the invaders were struggling hard. Matt Sheppard fell back to tenth, getting passed by Brian Berger and Brett Haas. Stewart Friesen was in the same boat as well, battling with Haas and Jack Lehner before the No.44 saw a powertrain issue end his night. At halfway, six of the top ten were regulars, with Berger battling around the seven and eight spots.

Brian Berger wrapped up his full-time racing career last night at Lebanon Valley. Despite having some issues in the race, Berger finished thirteenth. It was a great night for the driver of the No.60, making the redraw and passing cars until he got into Peter Britten after Britten came off the pace, knocking him out of the top ten. Congratulations to the Phaze 3 Racing team and Berger on a great run and great career.

It’s been a tough month for racing. Numerous tracks have been sold, are planning to be sold, or have just put the boards up and shut down. Other tracks have been rumored to be on the ropes for months now. However, you couldn’t tell that any of that was going on last night at the Valley. The stands were packed, food prices were reasonable, and the racing was pretty good. We see people in racing clamoring for every race to be an instant classic. But everyone needs to remember that not ever race is that game 7 walk-off moment. That’s what makes those moments special; they’re rare and border on the edge of belief.
That’s not to say tracks don’t deserve a little criticism once in awhile. We all know stories of a bad night at the track, a bad call, a bad surface, or whatever. However, it’s good to keep in mind that more often than not, the track crew knows they made a mistake. The constant barrage of nitpicking and complaining can wear down even the thickest of skins. Let’s enjoy the good nights at the racetrack for what they are. If we do that, maybe we can keep some racetracks around for generations.