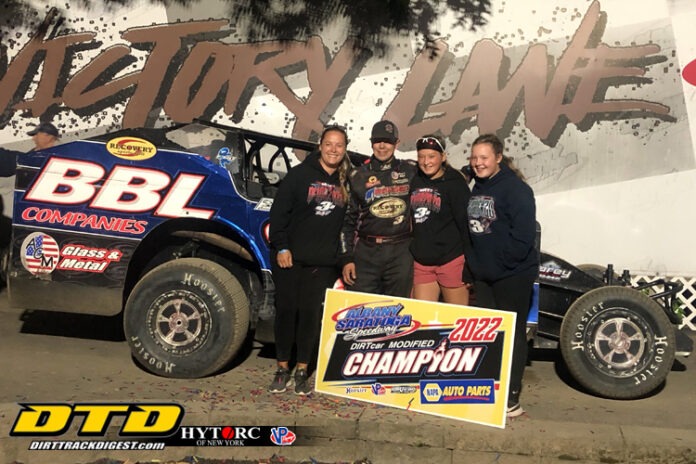 Matt DeLorenzo has shown the racing world that you can race on Hoosier tires at a DIRTcar track on Friday with a big block and then on Saturday change to American Racer tires and race at a Deyo track with the same big block and win at both.  And to put the icing on the competitive cake, take both track championships to boot.  Matty D was crowned Modified Track Champion at Fonda just three weeks prior on August 13. His win total at Fonda for 2022 was five bringing his career win total to 42 at the historic oval and his fourth championship.

While working on the car on Friday afternoon Matty D. set his can of soda down for a while and when he picked it up to take a drink, he felt something in his mouth and found out it was a bee, that stung his mouth but luckily he is not allergic and he suffered no ill effects other than the usual discomfort you would get with a bee sting in your mouth.  This didn’t seem like a good start to the weekend but things turned out well for the DeLorenzo race team.

When he came to the Great Race Place on Friday night he had already locked up the title so he was just looking for another win at the track to add to the four he already had in 2022 and add to his career total at the Malta oval of 20.  It appeared a late race caution was his undoing, that slowed his momentum and gave fellow competitor, Jeremy Pitts his second win at Albany-Saratoga.

When Matt DeLorenzo began his 2022 season in racing he wasn’t looking at running for points or much less a title at two Capital District tracks.  His plans were to run when his schedule allowed to fit around his daughters’ traveling softball league.  And they have two different schedules to work around so the plan was for Matt to take one daughter in one direction while his wife would take the other to her scheduled games.

As it turned out his season kicked off, and he found that running the big block in his No. 3d was more successful than the team had planned so as the wins started coming the team and crew and his family decided to try and devise a schedule that would work with both racing and softball.  The DeLorenzo race team members that brought this all together this season are Matt’s brother, Mike, who Matt admits is the brains behind the whole outfit, teammate Brian Gleason, and father, Tom DeLorenzo, who runs around getting parts for the team plus there are a whole lot of others that helped bring the No. 3d to victory lane and the titles this season.

Area auto racing attracts over 100 race cars weekly at each local track.  As writers it is a job to find local competitors at the track in the expansive pit areas.  One local driver that we have been trying to locate this season is Tim Deffer of Delanson, driver of the No. 19, Crate 602 Sportsman.  Tim only races whenever his time allows and races at both Fonda and Utica-Rome on occasion.  He and wife, Erica agree that family comes first and his daughters, Paige age 11 and Ashlyn age two and six week old Ava keep him very busy along with his job at Schenectady County Highway Department. 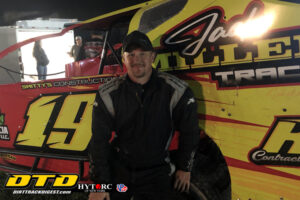 On Sunday we finally located Tim and his crew at the far reaches of the Utica-Rome pit area.  With him were his dad, Brian and former competitor, Pat O’Hanlon.  We remember Tim from when he was very young at local tracks with his dad and O’Hanlon raced at local tracks and went as far as Afton when he was a regular competitor about ten years ago.

Tim had a good run at Utica-Rome on Sunday, and finished fifth in the Limited Sportsman feature. 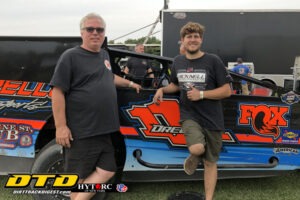 The racing family has connections like no other.  On Sunday as we walked the pit area of Utica-Rome we came across the Demetrios Drellos pit and with Demetrios was veteran racer, Curtis Condon.  We’ve seen Curtis race for a good number of years, we didn’t ask how many but surely many fans remember his name, first from racing four cylinders and then Street Stocks.  We remember him from Albany-Saratoga and now he is racing with the MVVDMS at area tracks.

Curtis says he races to release the tensions of his demanding job as an Industrial Coatings Manager with tight deadlines and famous clients.  He travels all over the world for his job and says he loves racing because of the people.  Demetrios is Curtis’s neighbor and has 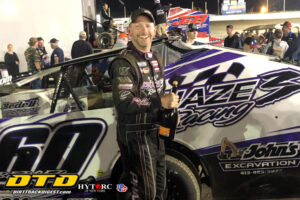 been of great help with his vintage Late Model.  Your fellow competitors are always willing to help you at the track too, says Curtis.  If it’s late and you need help loading your car, they will be there in big numbers. We are glad to see Curtis back and in competition with the MVVDMS and we wish him well in his racing endeavors.

Saturday was the annual Mr. Dirt Track USA event at Lebanon Valley, a Super DIRTcar Series event that marked another victory on Andy Bachetti’s resume on the high banks.  It also marked the final race in the 32-year career of Brian Berger, driver of the No. 60 Modified.  Brain said he has had one of his better seasons this year with two wins, two seconds and a third and he’s happy to be able to walk away with that. 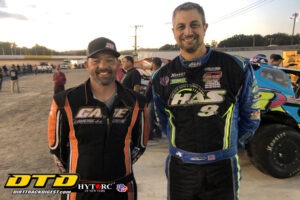 Sometimes we hear drivers complain about the driving style of other drivers and it may be warranted.  So it’s refreshing to hear one driver speak well of another. A few weeks ago in victory lane Matt Sheppard spoke of the good run that Adam Pierson had when Pierson finished second to Sheppard at Land of Legends.  Pierson has great respect for Sheppard and was pleased to hear what he said.  Pierson has been doing well on the SDS circuit this season and says his favorite tracks are Albany-Saratoga and Brewerton which are similar to where he started his career at Bear Ridge Raceway in Vermont. 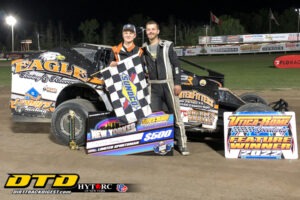 Both Seth Martin and Connor Prokop made the trip to Utica-Rome on Sunday.  Their regular racing is over and they both wanted to try their skills at something different.  Martin competed in the regular Crate 602 Sportsman division to get the feel of what he will be looking at next season when he moves up to that division because the rule is that if you are champion in the Limited Sportsman division you must move up the next season.  And Martin was champion in his first season of Limited Sportsman competition at Utica-Rome.

Connor Prokop took on the Utica-Rome oval for only the third time this season and once again the young driver showed his racing prowess racing against the weekly regulars and coming out on top, his fourth overall win of his first full time season.

As we close we ask that everyone please keep Dave Lape in your prayers.