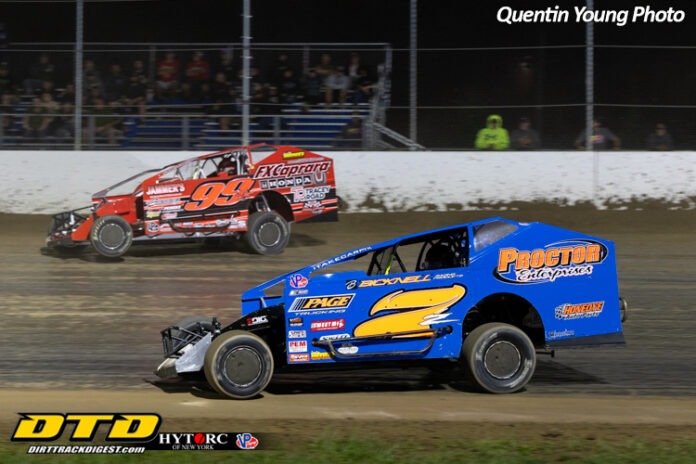 Larry Wight broke out the broom on Saturday night at the Weedsport Speedway.

Wight captured the win in the 60-lap Super DIRTcar Series event after taking the checkers earlier in the night in the 25-lap Lucas Oil Empire Super Sprint feature.

It wasn’t his first sweep of the two headline features as he’s done it in the past at the Fulton Speedway, but it was the first time he achieved the feat with the Super DIRTcar Series in action.

The Sprint Car wasn’t originally in the cards, but a late decision saw them bring the car to compete. It was a decision that worked out.

Wight started fourth in the Modified main and got the lead early. He got by Zachary Payne on an early restart and never looked back. Starting position can be everything and it proved to be the difference maker for Wight.

“It’s huge,” said Wight of his second row starting spot. “Especially here. You know, this place is so notorious for locking down one lane, which I don’t think it did anywhere near as bad as the races past. I think that bottom just had so much bite down there. I think it was just from a lot of rain. Mother Nature waters the track better than anyone and I think that’s what really helped us.”

Things got close near the end as Matt Sheppard rallied from the sixth row to get within striking distance at the checkered flag. Wight used traffic to help him keep Sheppard at bay while nursing a car with a left front flat.

“I knew he was coming,” said Wight. “I had a flat tire so I couldn’t really maneuver. I actually kind of kept (Adam) Pierson there on my outside. I figured I needed a blocker. I just clipped the wall coming out of four. I didn’t think I hit it hard enough, but it was just enough to peel it off the beadlock.”

It was a tough track on Saturday at Weedsport, but that didn’t matter to current Super DIRTcar Series point leader Matt Sheppard. Sheppard drove his No. 9s from the 12th starting position to second with only one caution. He was on Wight’s bumper as the checkered flag fell.

“We were good given the conditions,” said Sheppard. “I was just able to get up on that top and make it work. The top was actually, I feel like, a little better than it normally is here at least it was for me. I could carry just enough speed up there to kind of clear the guys that I was racing with. We kind of picked them off one by one. We got up to second with only a couple laps to go there. I saw Larry was wounded with a left front flat. I thought he was a sitting duck. When we got to him there were two lapped cars running side-by-side. It just blocked the track and I couldn’t get up top and rip around them and that’s probably what cost us the race.”

For Sheppard, it was another poor draw. He’s had his fair share of front row starting positions this year, but he hasn’t avoided the deep starting spots either.

“It was another lousy draw,” said Sheppard. “All I hear is how I draw the pole all the time. I drew 10th at Utica last week. It goes caution free, we drew 12th tonight and we had a caution on lap one and I was still 12th and it goes caution free after that. I drew 11th at Lebanon Valley. Everybody forgets about those nights.”

It wasn’t a win, but overall, it was still a good night for Sheppard.

“All-in-all, for what we needed to do tonight, it was a good run,” said Sheppard. “It was another good point night. These Super DIRTcar Series races are starting to dwindle. So, you know, every race we can get closer to the end puts us in a better and better position.”

Zachary Payne held his own Saturday to earn his first podium finish with the Super DIRTcar Series. The 21-year-old driver started from the pole position and kept his No. 7z up front to finish third. He led a handful of laps before losing the lead to Larry Wight. From there he pressured Wight before Sheppard passed him on the top. No one else had anything for him.

“This is the first podium, obviously the best finish we’ve had in a Super DIRTcar Series race, besides that it’s like a 13th,” said Payne. “I can’t complain. It was a great race. I was right there at the end with Larry and I took a shot at him in one and two to try to go around him. It seemed like it started to rubber up around the bottom. He kind of pulled away and I fell back in line.”

Payne continues to get better and better each time out with the Super DIRTcar Series.

“To even be in a redraw with the Super DIRTcar Series race is tough,” he said. “To draw the poll obviously helps with the racing at this place to start up front. We ran a good race and made the right adjustments for the feature. Me and my dad figured it out with help from the guys from DIG (Racing Products) Brandon and Dale plank. I can’t thank them enough. They’ve helped me out a lot this year. I think we were starting to tune the car in and get it figured out. It is something that I can actually drive consistently and actually work on my own driving style at the same time.”

“The Modified race was pretty good,” said Hile. “We were pretty maneuverable early, but we were a little tight on the bottom. We kind of could move around. We could roll the top when we needed to, but then it just kind of locked down to the bottom there. There was a bunch of moisture around those jersey barriers and we were all just fighting for it. Luckily, we started up front. We had a good enough car to stay there. Larry did a hell of a job and stunk up the whole night. But yeah, it was good for us. The Modified was pretty good.

“The sprint car we won a B-Main. My biggest issue right now is just being around other cars. They drive so different around everybody else. Luckily, here at Weedsport it gets pretty wide and slick. Come feature time, I got a little more comfortable. I feel like I can race the thing. We just got to get more laps and get it figured out. It was a blast.”

Hile admitted he had a good time running both classes.

“Yeah, it’s a blast,” he said. “I’m excited to be done today. We were jumping from Modified to Sprint Car, back and forth. It’s like holy moly, what a day. So, it’s a ton of fun to do it. I’d love to do it more. It’s something that I’ve always wanted to do. To be in good equipment to be able to do it like this is pretty cool.”

The Rock in a Small-Block

Rocky Warner ran a Jason Simmons’ owned small-block Modified in the Super DIRTcar Series. He got by Jimmy Phelps late in the race to secure the final spot in the top five.

“We usually have horrible luck here, even with the Sportsman, we won a few races but we just didn’t have a lot of racing luck on our side,” said Warner. “Tonight, having a 358, I think helped us quite a bit. We were just a tick off. It’s kind of new to us running that car on as it’s only our third race on it. Hopefully we can dial it in. The track went from super-fast super to slow in a hurry. I’m happy. I didn’t expect to get a top five out of this. I was happy with top 10 so I’ll definitely take it.”

“I’m happy with it,” he said. “Two top five’s is great. One with the 358s and one with the big-blocks is pretty cool. I’ve been racing Modifieds for a little while and that’s still pretty exciting for me.”