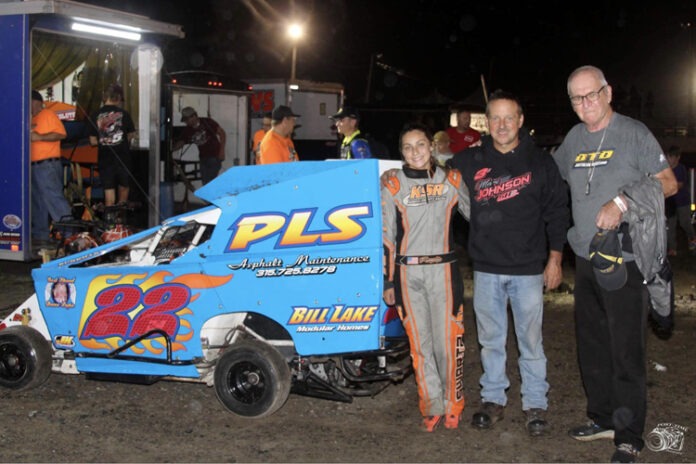 This past week the racing world said good-bye to Dave Lape, driver, fabricator, promoter and all around nice guy.    Lape passed away on September 7, 2022, with his family by his side. Sunday was the visitation and memorial service and many came to say their farewells.

Young David Lape began his racing career in go-karts in 1955 and moved to cars in 1964 at Fonda. He recorded his first win at Fonda in1969 and the rest is history for the famous No. 22 driven by the soft spoken fellow from Canajoharie.

During his time in racing Dave Lape amassed 191 career wins, 13 track titles. He became a successful chassis builder with his Champ Car design and he and friend Andy Fusco formed Lapco promotions to promote races around the Northeast. No matter where Dave Lape raced he always called Fonda home and his legions of fans that came each Saturday night 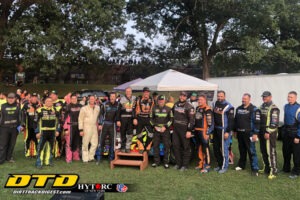 were some of the most dedicated.

After hanging up his helmet, he dedicated his Saturday nights and much of his off time to the Fonda Speedway Hall of Fame and Museum and along with his wife, Jackie and daughter, Jessica and her husband, Peter have made it a show place for Fonda fans and drivers to be proud of. 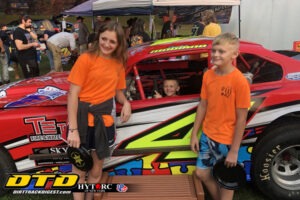 The season of weekly racing is winding down and on Friday Albany-Saratoga had a special Autism Awareness event for the Pro Stock division, a 34-lap feature paying $3555 to win. The race was put together by Pro Stock competitor, Jordan Modiano, who has a daughter with autism. Modiano’s racing background is in drag racing for many years before he came to Malta in 2019 to try dirt racing in the Pro Stocks. His idea for the Autism Awareness night came to him last season and after contacting Lyle it materialized and Friday nights event was the results. Modiano reported this week that the first Autism Awareness night raised a total of $10,410. Thanks to the racing family. 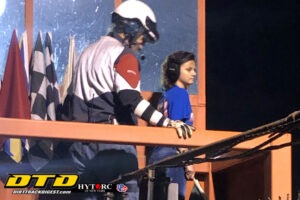 Rachael Modiano was given the honorary flagger position for the 34-lap Pro Stock feature and many young fans were allowed to climb into Jordan’s beautiful No. 4m Pro Stock prior to the night’s activities. We snapped a photo of three Ramsey family members enjoying their time in and out of the car, Ashlyn, Joshua and Eli. For the fans all the Pro Stock drivers came to the grandstand area and signed autographs before going out to compete. 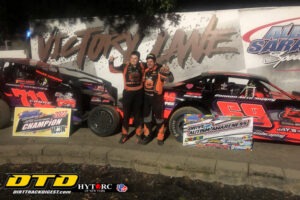 The Autism Awareness feature event was an intense battle and the yellow flag flew with just one lap to go, setting up a drag race to the end in which No. 69 Rich Crane was victorious. In a beautiful and generous gesture, he donated his entire winnings of $3555 back to the Autism Awareness cause. And to put the icing on the cake for the Crane family, Rich was joined in victory lane by his son, Rich, Jr., who was crowned Limited Sportsman Track Champion for 2022. 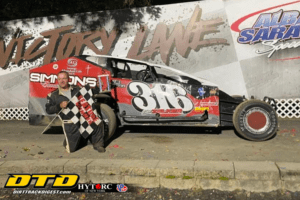 It ’s always great to be at the track for a first time win and on Friday Limited Sportsman driver, Dave Zelker put his No. 3:16 in victory lane at Malta for the first time. Dave says he’s been racing for three years and on Friday he was looking for that checker to signify his first career win. Dave and his wife Debbie had plenty of people there to celebrate with him, all those that help him each week in the pits; Pops, Pastor Jim, Dawn James, Jonny and Bonny. When Dave exited the car he made sure to thank the Lord, his fellow racers, Lyle and Marcy Devore and all the fans. He says he really enjoys racing with his fellow Limited Sportsman drivers.

Announcer Dan Martin spoke of the loss this week of David Lape, sharing that Dave is ninth on the all time win list at Albany-Saratoga with 25 wins, one on asphalt and 24 on dirt. Albany-Saratoga dedicated the night of racing to Dave Lape.

Earlier in the night on Friday we spoke with newly crowned Modified track champion at the Malta oval, Matt DeLorenzo and asked him if he was headed to victory lane, and he just smiled and walked away. A few hours later that smile was a little bigger as he stood in victory lane for the fifth time this season at the track, matching his number of wins at Fonda this season where he was also crowned Modified track champion. Matt dedicated his win on Friday to the Lape family and the dedication they have put into dirt racing at northeast tracks.

The DeLorenzo family knows the hard work and effort that goes into the sport they love and they have paid their dues and this year they get to live the dream. Congratulations to Matt and his entire family and crew. 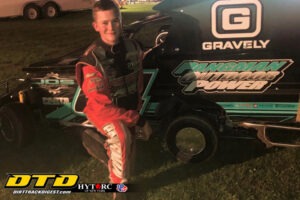 Shaun Pangman has found a new niche in racing; bringing new blood to the sport by way of the Slingshot division at Glen Ridge and ideal venue for young racers to get their feet wet in racing. Shaun usually has his two daughters, Abby and Izzy both racing in the Slingshots but on Sunday Abby had another commitment so he brought a new addition to his team, 14-year-old Gavin Knapp of Cobleskill. Gavin had never driven in any form of motorsports and on Sunday after the running of the qualifying heats, Gavin started the 12-lap Slingshot feature in 15th position. At the end of 12 laps he was in position six, a very good run for the true rookie.

Glen Ridge also took time out to honor Dave Lape for the many memories and support he gave to racers and fans throughout the years and Ed had the honor of memorializing Dave and the No. 22 alongside the Slingshot of Kirsten Schwartz that was wrapped with the Lape No. 22 colors.

Fonda 200 Weekend is upon us, starting Thursday and culminating with the Fonda 200 on Saturday paying $53,000 to win.