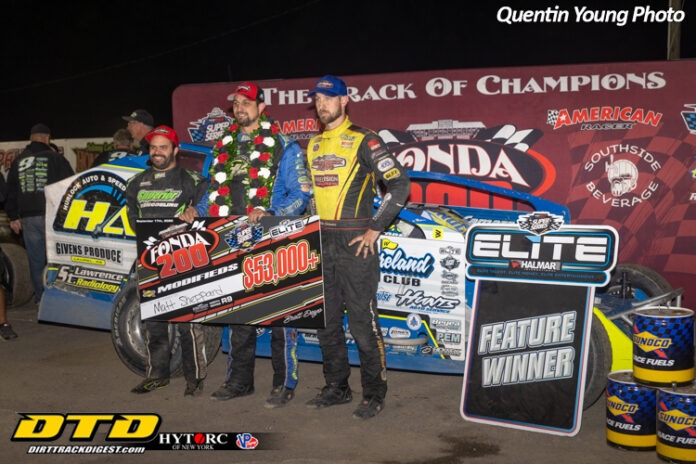 Matt Sheppard’s illustrious racing resumé got one line longer on Saturday night, as Sheppard nailed down his first Fonda 200 victory after a race-long battle with Anthony Perrego and Mike Mahaney. After starting 11th, Sheppard picked his way through the pack and reached the top spot on lap 136, fighting off a late charge by Perrego for the $53,000 payday.

Mahaney was on the charge early, putting heavy pressure on polesitter Stewart Friesen not long after the drop of the green. With 29 laps in, Mahaney slipped under Friesen for the lead, with Perrego close in tow. After a brief three-car battle for the top spot, Mahaney set sail and went on cruise control for much of the first half.

On lap 85, Sheppard cracked the podium spots for the first time, sliding by Friesen and into third. A caution shortly after saw the introduction of pit strategy, with leader Mahaney heading to the pits on lap 89. With Mahaney’s team the only in the pits utilizing a hydraulic lift underneath the chassis, Mahaney changed all four tires under the stop and won the race off of pit road amongst the six cars that joined him.

With Mahaney pitting, Perrego inherited the lead. While Sheppard made a brief run, Perrego hung on to the lead at the halfway break. However, much of the field had pitted prior to the break, so the running order was severely shuffled when race pace resumed.

Billy Decker showed the way after halftime, but fell under pressure from Marc Johnson quickly. Johnson and Decker went back and forth a trio of times, with Johnson securing the lead on lap 115. Meanwhile, Sheppard was on the charge, cracking the top five soon after the restart, then sliding by Mahaney on lap 117. Then, Sheppard passed Decker for second two laps later, setting sail after Johnson.

Johnson’s lead shrunk quickly, and a lap 132 yellow did not help his cause. Sheppard darted to the top and to the lead on the restart, leaving Johnson to battle with Mahaney and Perrego for second. Mahaney finally secured second on lap 150, with Perrego in tow.

By lap 170, it looked like Mahaney was returning to the dominant speed he had in the first half. Soon as Mahaney looked ready to make a run at Sheppard, both Sheppard and Perrego seemed to kick it up a notch. With 21 laps left, Perrego moved by Mahaney and into second.

Sheppard’s lead was hovering around a second and a half, usually with a couple lapped cars between himself and Perrego. Traffic seemed to be an even draw for the top two, with neither able to gain much time on the other through traffic. With ten laps left, the yellow flag waived, eliminating the traffic and putting Perrego directly behind Sheppard.

Over the final laps, Perrego hung close, even putting a nose under Sheppard with five laps left. However, Sheppard hit his marks well in the final circuits, keeping Perrego at bay for his first Fonda 200 win. Chasing Sheppard across the line was Perrrego, Mahaney, Danny Varin, and Johnson.

A hot topic of the event was the track work done after the halfway pit stops. During the driver’s meeting, event management introduced the possibility of track work if the groove took rubber prior to halfway. With the bottom sticking up during the first half of the event, the grader and water truck made an appearance. Sheppard noted that drivers were expecting some work prior to the feature starting, but work done on a track during an event always throws an extra curveball into a race.

“They’ve said every year in this race, if it rubbers before halfway, they’ll do track prep at the break,” Sheppard noted. “After the break and track work, I felt better higher on the track and carrying more momentum, but I knew eventually it was going to rubber on the bottom again. For a while, it was caught in that in-between zone, where it was starting to rubber but not completely rubber. I felt like I had to protect the bottom because of the spots that were rubber, but felt like I could carry more speed running higher. It made me a little bit nervous at the end, but when you’re leading, you just have to try and keep your momentum and not do anything stupid.”

In terms of money, the $53,000 winner’s share makes this Sheppard’s highest-paying win ever. Those who witnessed Sheppard’s victory lane celebration certainly observed Sheppard as being significantly more excited than normal.

“This one is up there,” Sheppard said of the win. “It has to be right at the top of the list along with the first one at Syracuse, that was awesome. The first Eckerd 200, the last-lap pass at Oswego was a big one, and this is right there with those few.”

One step down on the podium was Perrego. In the final laps, Perrego had the advantage of running in second and seeing Sheppard’s lane choices and decisions. While Sheppard found comfort in the momentum of the middle and top lanes, Perrego used this to his advantage to make a run for the win.

“We had a really good car all night, we could really maneuver in traffic and that benefitted us,” Perrego stated. “Once I got to him at the end, I was tight and couldn’t really hit it right, probably overdriving it a little bit. In one and two, Matt was up the track a little bit. When I got by Mahaney, I really found something in the middle of the corner, and when I got to Matt it was still there. The lap I really got to him, he came back down to the bottom and that’s what cost us. Matt and I were talking at halfway and figured Deyo was just kidding about the track prep he mentioned earlier, but it needed to happen. It kind of got one lane towards the end, but for the most part the track raced awesome the second half.”

If Mahaney ever wins the Fonda 200, it will be very deserved. Mahaney led a large chunk of laps in this year’s edition en route to his third podium in a row in the race, with Mahaney finishing third in every Fonda 200 since the event’s return in 2019.

“They were a little faster,” Mahaney stated. “I feel like we were better the first half of the race, but the track changed. The first 100, we had the right stuff, but second 100 it was a lot different. Live and learn, that sure is a crapshoot when you sit there after you already made adjustments and then they do the track work, it’s a really serious challenge. The tires seemed to fire on long runs, it would seem to come in, but on the restarts and stuff it wasn’t that great.”