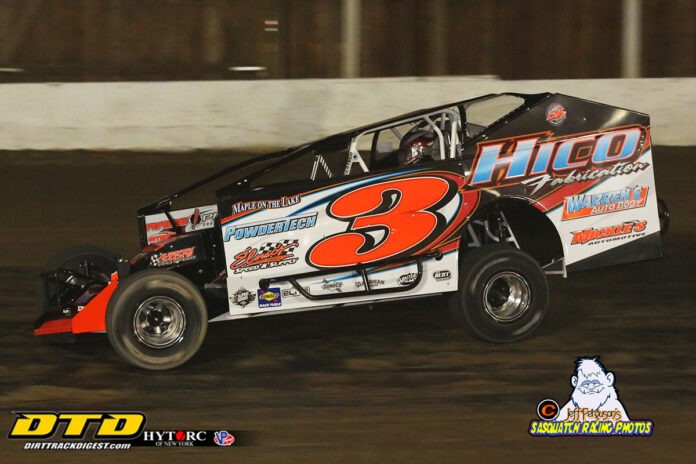 Over the weekend Jeff Trombley returned a familiar seat that hasn’t been all that familiar over the last six years. He returned to Modified competition.

Trombley, a standout 305 Sprint Car driver, made his first start in about six years during the Fonda 200 weekend. It was a learning curve for the Altamont, N.Y., driver as things are much different then when he decided to go Sprint Car racing with car owner Warren Alexson.

“They’re totally different from what we ran,” said Trombley. “They’re trying to tune on the car a little bit, but I need more tuning than the car does. You need track time with those things. So, they’re a lot different. It’s a different animal.”

Trombley was put in the car by long-time friends and supporters Pep Coradi and Dick Hicks from Hico Fabrications. They offered up the opportunity to race at Fonda. As of Friday night, he was still trying to get a handle on the car.

“I don’t know what I need to feel in the car,” he said. “I don’t know if we are going in the right direction. I kind of tell them, you know where I’m lacking or what I need to do, but it’s not. I’m not a lot of help right now. I did coils and I built four-link stuff with Randy (Williamson) from Bicknell. I did a lot of that stuff, but they feel nothing like these cars now. Nothing like it. They are totally different.”

His goal was to have fun. He did that on Friday night making the 200.

“We’re having a good time,” said Trombley. “I love being at the races anyways. It was a little busy tonight doing both classes, but tomorrow we’ll come and try to fine tune the car a little bit and get dialed in for that.”

Unfortunately his night ended early on Saturday in the feature with an early race incident.

Trombley may not be done with the Modifieds as the team has one more race planned for the 2022 season.

It wasn’t the result he was looking for at the end of the weekend, but hopefully we’ll get another chance to see Trombley back behind the wheel of a Modified in a few weeks.