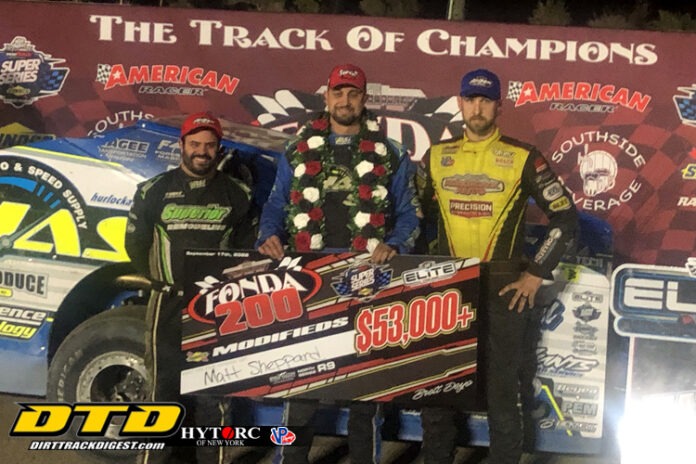 Saturday was the final event in the 2022 season at Fonda Speedway and capping off the event was the Fonda 200, paying $53,000 to the winner and when all was complete it was Matt Sheppard that stood in victory lane holding the big check and special edition trophy.  It was his first win at Fonda this season and his fifth win overall at the Track of Champions.  Also standing on the podium with Sheppard was Anthony Perrego and Mike Mahaney.

There were 11 lead changes between six drivers with Sheppard taking the lead on lap 135 and never relinquishing it.  There were 53 drivers that tried to qualify for the big event and big money and 41 started the race that wrapped up a very successful season for promoter Brett Deyo and his staff.  Deyo has had a successful run at Fonda and with the help of the Fonda Fair Board, was able to install LED lighting around the track over the break for the annual Fonda Fair, something that made a big difference for the fans and drivers and for the live televised version on FloRacing.

Bobby Varin blew a motor on Friday and with his crew working overtime Friday night was able to take one of the Fonda provi  sionals for the 200 and it paid off for the multi-time Fonda champion, Varin was awarded $500 as the Hard Charger, running from his 40th place starting position to 11th.

A few weeks ago we gave information on Fonda 602 Crate Sportsman champion, Payton Talbot and also the Thunder on the Thruway champion in the division and Talbot also finished second in points to Matt Janczuk at Utica-Rome, a great showing for an up and coming driver just four years into his career racing Sportsman.  He told us at that time he was working on getting a Modified ride for the Fonda 200.

We’re not sure just how the whole deal came together but it was partly due to the suggestion of Dave Constantino to his car owner Laudy Hoyenga to put Payton in one of his Modifieds for the Fonda 200 Weekend. 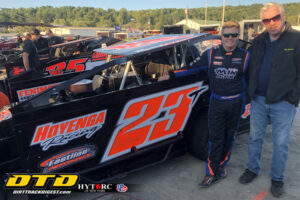 That is what happened and when the weekend arrived, Payton Talbot had two rides, his own No. 14T 602 Sportsman and a beautiful black No. 23T, Modified, a DKM chassis powered by a Bidell engine.  Behind the wheel for the first time in the “Ultimate Underdog” event at Fonda he finished 10th.  He went on to qualify in the first qualifier for the 200 by finishing fourth and received the $100 bonus from the gang in section 8 for being the highest finishing Fonda regular.  Payton did a creditable job in the Fonda 200 placing 21st in the 41 car field and Hoyenga was very impressed.  The team is looking at racing one more event this season at Utica-Rome on October 4 for the Ultimate Outlaw 50.

Of course, Ed’s curiosity got the best of him and he took it upon himself to research Payton Talbot’s record in Sportsman since he began in 2019.  Payton has 125 starts, with 13 wins, finished in the top five 63 times and has finished in the top ten 94 times. 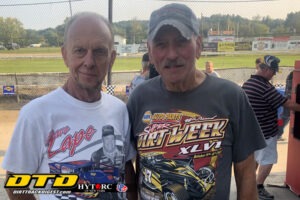 This past weekend was one to meet friends we hadn’t seen in a long time and some we see every week.  Bob Vedder and Bob Anderson both came to the Fonda 200 weekend to reconnect with old friends and former competitors.  Both Bob’s had found their way to victory lane at Fonda, in the Sportsman division, Vedder five wins and Anderson four wins. 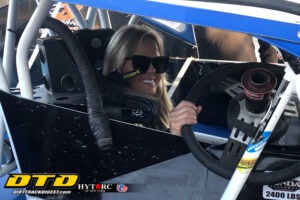 Jessica Friesen spent most of her weekend dealing with motor issues but even with two expired motors, JZ came home with an eighth place finish in the 200.

Jeff Trombley found himself back in a Modified and finished ninth in the “Ultimate Underdog” event on Thursday, also qualified for the 200 by finishing seventh in the fourth qualifier on Friday, but dropped out of the 200 early.  Jeff did double duty at Fonda and 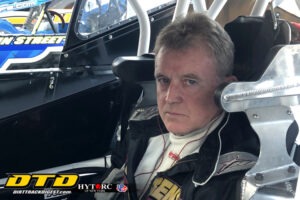 drove the Warren Alexson No. 3A, CRSA Sprint to finish in the runner up spot to Mike Kiser in the sprint main event.

We will be at the Malta Massive Weekend this Friday and Saturday and hope to see many of our friends and fellow racing enthusiasts there.