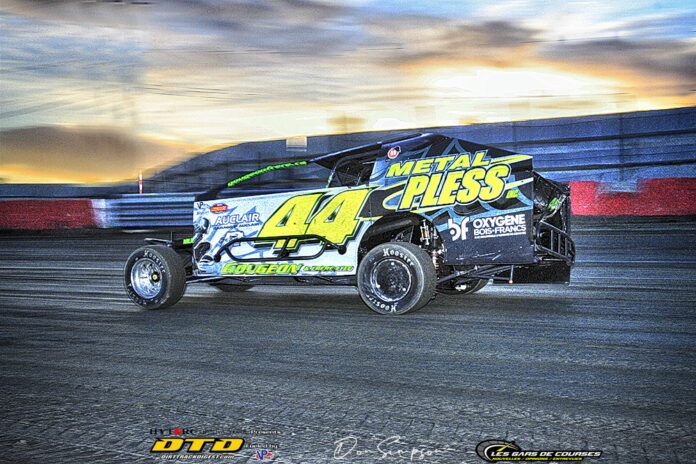 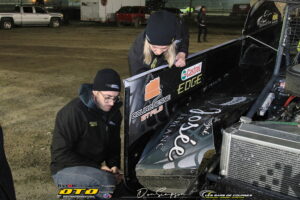 Team 44 arrived at the final race weekend at the Autodrome Granby full of optimism. Raphael Gougeon was aiming to secure a second trip to victory lane after taking his first feature victory in the Sportsman Modified at RPM Speedway earlier this season.

With a fourth-best time in his time trials group and a second-place finish in his heat race, things got off to a strong start. These early, strong efforts placed Raphael third on the 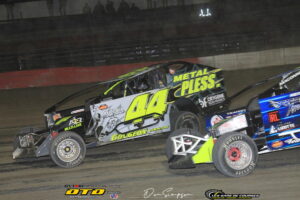 starting grid for the 75-lap feature event with a full field of 33 cars.

At the green flag, Raphael was in contention, fighting for the lead. A battle between Antoine Parent in car 17 and Raphael heated up, and for 49 laps the two dueled for the win.

However, after a yellow restart on lap 50, disappointment would present itself. Due to an accident that prevented Raphael from finishing the race, the young driver was forced to withdraw from the competition. 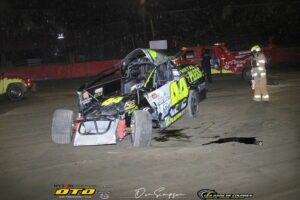 It was at this point that the team rose above the situation. It was clear that the accident was not of Raphael’s making, but instead of raising the question of blame, the team began to strip the car apart to make the necessary repairs.

It would be a long and strenuous process, and as more panels were removed, it was clear the chassis was heavily damaged.

Sebastien Gougeon, Raphael’s father, said, “After the Friday crash, we’ve been lucky to find the parts (the front part of the frame) and a good welder, thanks to Philippe Imbeault and his team. On Friday, we stripped the front end of the car, and after a short night, we headed to Garage P. Auclair to have the front replaced. Raphael raced with a far from the perfect car as we didn’t have enough time to scale it, but at least he was back on track to put the crash behind him.” 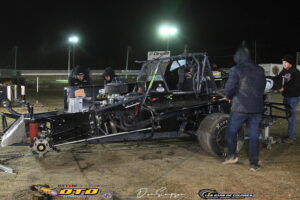 The team returned to the Granby track around mid-afternoon after putting in many hours of effort and with assistance from the Garage P. Auclair crew. The reassembly process started, and everyone on the team was aware of what needed to be done.

The car was as prepared as it could be when race time drew near because there was not enough time to complete the task, but Raphael would race on this day regardless.

Time trials were not that good, but given the situation, Raphael was just happy to be racing at all. While the crew continued to make improvements to the car, Raphael’s heat race went well, finishing mid-pack after starting last.

It was now the final feature of the two-day event at the Autodrome Granby.

The major goal of these exercises was for Raphael to start and finish the race, even if he would only finish one spot higher than his starting position in the 30-lap feature. He accomplished what he set out to do, which is a true testament to what this small team is made of. 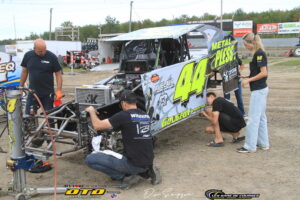 Raphael said, “Friday night’s accident was really hard for us to accept, especially for my dad because he works so hard on the car. I was having my race so far in my career and had a chance to win, but I guess that’s racing. By Saturday morning, my dad and one of our crew were up by 6: 00 a.m. and off to Philippe Imbeault’s race shop to change the whole front clip of the car. Things went very well, and they were back at the track by 1:30 p.m. to start putting the car together. We worked extremely hard and made it just in time for time trials, finishing sixth. The track was really hard, which made passing really difficult. But just to be able to race after the Friday night incident, I was really thankful. I can’t thank my dad and my team enough for the help they gave this weekend. We definitely saw how the big race teams have to deal with a problem and moving forward takes a big passion on their part. ”

The Gougeon family and the entire team, however, displayed true professionalism in everything they did, including not blaming anyone team for the incident that started it all in the first place. This is one of the most important aspects of this story that I learned from watching the entire process; that they rose above the situation and proved just how great a team they are. 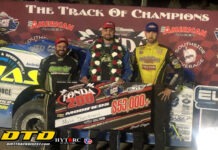