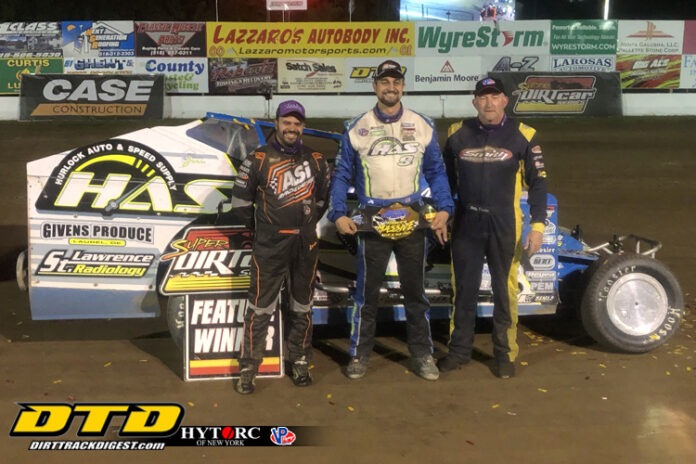 Albany-Saratoga Speedway was the scene of the Malta Massive Weekend this past Friday and Saturday.  Friday the Modifieds ran a 40-lap main event and Jimmy Phelps of Baldwinsville took the checkered flag after a heated battle with Marc Johnson of Guilderland and Stewart Friesen of Sprakers.  Friesen followed Phelps across the line followed by Johnson. It was Phelps’ second win at the Malta oval.

On Saturday, Matt Sheppard showed the Malta fans just why he has been DIRTcar Champion eight times and is headed toward another championship this season.  Sheppard missed qualifying in a spot that would have put him in the redraw so he was relegated to start in the 15th position but it wasn’t until the last ten laps of the 100-lap, Super DIRTcar event that he made his move and his No. 9s started to move toward the front and leader, Billy Decker.  Sadly, Malta regular Adam Pierson suffered an engine failure on lap 83 after leading all the laps except the first up until that point.

Sheppard picked up $10,000 for the win and because he had already secured a spot in the prestigious 50th running of Super Dirt Week in October at Oswego, Billy Decker of Unadilla got the spot. 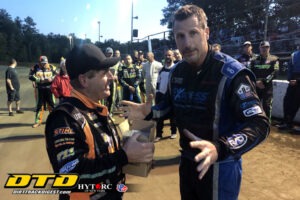 The DIRTcar Pro Stocks ran on Saturday, running 30 laps and Richie Crane picked up his first win in a DIRTcar Series event.  Crane led from the beginning and was able to hold off the strong challenges of Nick Stone of Rotterdam and Rob Yetman of Castleton, Stone and Yetman finished second and third respectively.  During opening ceremonies, Rich Crane was presented with a special appreciation award by Jordan Modiano for his generosity in the Autism Awareness fundraiser two weeks prior. 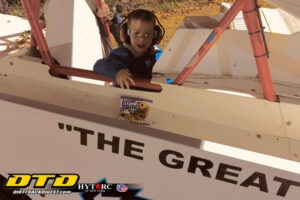 Crane won the special race and donated his winnings of over $4000 back to Autism Awareness.

One of the most popular race cars at Albany-Saratoga is the DKM racer in the concession area that allows young racers to get the feel of sitting in a race car.  On Friday we found four-year-old Curtis from Bennington, Vermont enjoying his first adventure behind the wheel.  For all we know he may be the future Hector or Neil Stratton.  For sure his evening will be memorable. 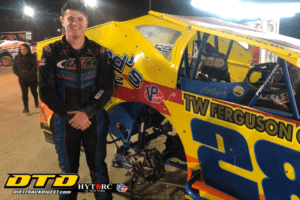 We also spotted a bright yellow No. 28 in the pits at Malta and recognized it as a paint scheme that the legendary Butch Jelley drove and on Friday it was driven by Marty Kelly, III, who has made it his mission to keep the memory of Butch Jelley racing alive.  Marty is what you would call a diverse young man, you may find him behind the wheel of his race car; you may hear his voice as an announcer at a local track.  Marty said he has a full card this weekend; he will race in the 40-lap DIRTcar Sportsman event at Malta, then on Saturday at Bear Ridge and Sunday at Devil’s Bowl for the final point show.  Marty also plans to make the trip to Super Dirt Week in October, he had always thought about attending and this being the 50th Anniversary running he decided this was the year to go.  He’s a young man on a mission and we wish him well. 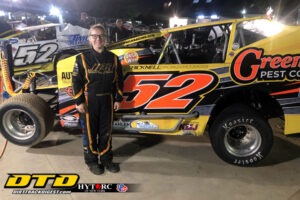 We also spotted a No. 52 Sportsman pitted right next to another No. 52 racer, one driven by Canadian driver, Jessica Powers and the other driven by 69-year-old, Ron Proctor.  Jessica relayed to us that she had never been to the Malta track and was looking forward to the night of racing with the over 60 other competitors in the Sportsman division at the track on Friday.  She also said she would not be racing when she was 69-years-old and Ron said he hadn’t planned on still racing at that age either but he still enjoys it.

Jessica normally races at Brockville and Can-Am Speedways so we took a quick look at her record for this season at the two ovals.  She has three wins, 14 top fives and 26 top tens.  On Friday she was involved in a jingle during the last chance race and started 31st in the 40-lap DIRTcar Sportsman event and finished 17th.

Saturday we returned to Malta for the conclusion of the Massive Weekend for the Pro Stock DIRTcar series event and the Modified Super DIRTcar event. 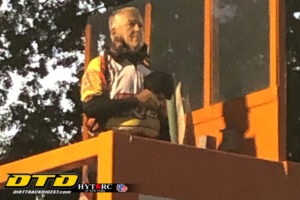 When the DIRTcar series is in the house there are also many DIRTcar officials, one being Dave Farney who brings a long history as a flagger for so many great events.  Dave and his brother, Jeff and their late parents, Gert and Ernie Farney have been such a part of our sport for a long time and are well respected by all who come in contact with them. 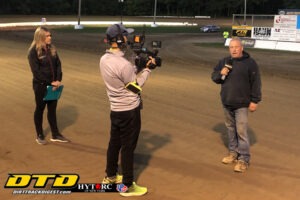 At the conclusion of opening ceremonies on Saturday, Promoter Lyle Devore took the mic and made an announcement to clear some of the rumors that have been running through the rumor mill the past few weeks.  Lyle said, “Whatever you see or hear Albany-Saratoga has not been sold and will be in operation in 2023, with opening night being April 14, 2023.”  He also said that new clay will be put down very soon.

Malta’s sister track, Lebanon Valley was also in the news this week, with a posting on their Facebook page that a major track redesign is in the works along with many facility upgrades.

Until next week when Ed will be headed to Utica-Rome and Super DIRT Week, please send all news and/or comments to biittig@yahoo.com