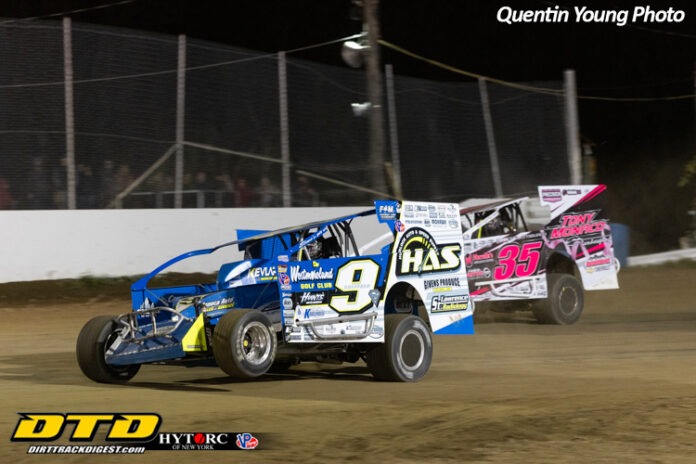 Respect is something drivers have for other drivers and Fulton Outlaw runner up Mat Williamson had that for Matt Sheppard.

Many folks think the Outlaw 200 is a big-block show, but recently small-blocks have been in victory lane as it is a choice which some make correctly and others not so much.

It was like a chess match with Sheppard leading the bulk of the first half and Williamson getting past him as they jostled back and forth.

However, with Chad Phelps, Alan Johnson and Tim Fuller remaining on the track, Williamson and Sheppard came back to start the second 100 in fourth and fifth place.

A few laps later Williamson went past “The X Man” and Sheppard followed quickly. On the 122nd lap the No. 9s went under the Buzz Chew No. 88 and one wondered if this was over.

The Mat(t)’s ran away and little did anyone realize that there would not be one single yellow in the final 100.

As the laps ticked off Williamson began to close. Traffic was simply horrendous (as it had been all night long). It appeared the 88 might be headed around the 9s with just nine laps left. However, lapped cars did him in.

Alongside his car outside the tech barn he said, “Hile and the 6NN got together right in front of me.” He took evasive action, but that was it.

The Buzz Chew team had chosen the small block route while the winner brought out his big block.

Williamson said, “I have a lot of respect for Matt. This was a small-block track tonight and he was able to win with his big-block.”

Meanwhile, Mike Mahaney ran with Chad Phelps, Tim Sears Jr., and Hile early on in the second 100.  He finally grabbed third for good  as he went outside of Phelps at 137.

Mahaney settled for third,  but was 12.8 seconds behind the leader.

Phelps, having the best run ever in the 200 was solid throughout the night. He settled for third in the first half and this year drivers who stayed on the track resumed the race in the new positions. First half ended it was Williamson, Sheppard, Phelps, HIle, Mahaney, Tim Sears, Max McLaughlin, Alan Johnson, Ryan Susice, Larry Wight and Tim Fuller.

However, Phelps, Johnson and Fuller remained on the track and when the race resumed they were the top three.

Phelps had started back around 14th and Billy Dunn 30th.

With 50 to go and Sheppard, Williamson and Mahaney gone the fans attention turned to fourth with Phelps, Sears, Hile and Dunn.

Dunn appeared the strongest as his car was perfect in the middle all the way around.  With 14 to go he got past Phelps for fourth and that’s the way he finished.

Larry Wight settled for sixth. Phelps had gotten into the rear end of the 99L on the 82nd lap as they nearly got locked together on the backstretch. Larry did a 360 and kept going, but never recovered.

Seventh was Fulton track champ Tim Sears Jr. who started 25th, worked his way into the top five, but at the end he lost a couple of spots.

Billy Decker came out of one of the last chance races from deep in the field, got lapped, unlapped himself under a yellow and rallied for eighth. Hile ran toward the front of the field all night. He started deep in his heat and had to work to get into the show, but started sixth.

Chris noted, “I always draw around 140 or so here so I know I will have my work cut out for me to get in.”

Rounding out the top ten was Ryan Susice who started 32nd in the 44 car field. He was 17th with 25 laps to go and took just 14 more laps to get to the top ten. Ryan never even started his heat.

Eleventh was Tyler Trump as he had a guaranteed spot with a win over Max on Friday night, but improved upon it  winning the first heat of the night.

Zach Payne went from 24th to 12th while the veteran Alan Johnson was 13th. A bit of concern for Alan in heat action with smoke pouring from the car.   Gary Lindberg and Roy Bresnahan rounded out the top 14 and 15.

The race took longer to start than anticipated with three complete restarts. Jimmy Phelps appeared to have rear suspension problems. He started third, but brought the race under a yellow at the outset.  He immediately headed to his pit, not to return. He was credited with 44th with no laps.

Another key loss at that point was Anthony Perrego. He was credited with three laps. On Friday night the team had engine trouble in hot laps, loaded up, took it to Pat Morrison’s shop and came back. Never could catch what KO’d him but he was 42nd.

Max McLaughlin was top 10 at the break, but when the action was set to resume he wasn’t on the track and had to go to the tail end of the lead car line. Max dropped out at 127 for 31st.

Dalton Slack had never seen Fulton before Friday night, but said he really enjoyed the high speed straights. Sail panels weren’t strange to him as he has to run them when he runs his W16 at his home track. He too went out at 137 for 29th.

Tim Fuller’s car is simply immaculate. He had tire trouble in the first half, pitted and came back. However at 150 he headed down the ramp for the pits for 28th.

Really the lone Quebec invader was Felix Roy and he settled for 24th with 194 laps.

Corey Barker finished 21st. His season was almost over and if it hadn’t been for his dad, Johnny and Morrison they would not have been here. He lost the 358 engine at Mohawk series race.

This was the first year you could draw and then pay a hundred bucks to redraw. He picked 96, paid the money and drew seven which eventually meant he would start 17th in the feature.  He was 21st with 196 laps complete.

Eighteenth place Ryan Arbuthnot won a last chance race and started 41st. He simply stuck to it and patiently worked his way through to finish just two laps behind the leader.

In heat action heavy body panel damage and some suspension for Todd Root and Lucas Fuller after they got together.

Zach Payne got Arbuthnot at the line for the fifth and final qualifying spot in his heat.

A bit different this year as it is the first time I have not been behind the microphone  in decades at Fulton for the 200, but I walked the pits, got tossed out of a reserve seat, stood alongside a top rail while the smell of weed surrounded me as I talked to veteran fan and official Doug Zupan, moved to the tower to visit and grabbed a snack. I sat on the roof and watched the 200 and thanks to Bobby Sweeney and Mike Frazier for making sure I could stand back up, but it was all well worth it as I have always felt this is the best one day Modified show racing has to offer.