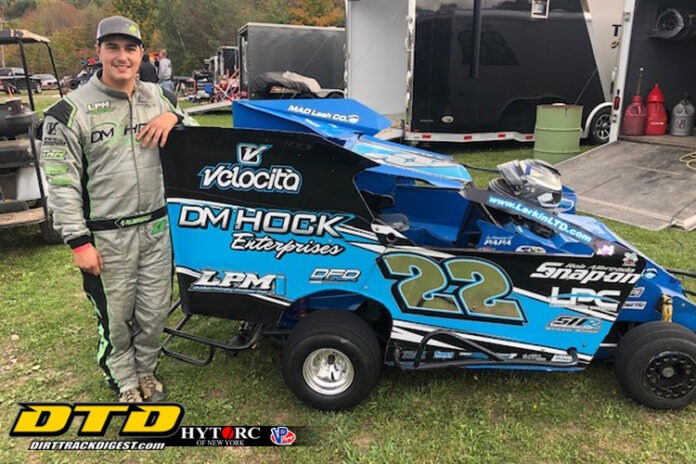 Before heading to Utica-Rome and Super DIRT 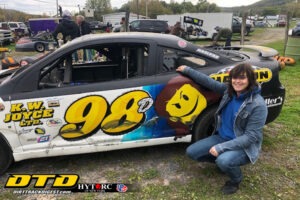 On Sunday, Dan Haslun of Sloansville was celebrating his ten years in racing; Dodge City was where he began his racing career in 2012.  Dan has been involved in racing most of his life because he was born into it, his father, Cliff has been racing for at least as many years as we’ve been writing a column in the local paper, he was part of the first column we wrote for the, now out of print, Daily Editor.  Dan is also related to the Joslin’s who have been racing in some capacity for years.

For the past few years Dan has been trying to find his place in local racing, he’s tried photography, announcing and racing his beautiful, No. 98d Four Cylinder.  Most recently Dan has found a home as the announcer for the Mohawk Valley Vintage Dirt Modified Series and in doing so has proven himself as a talented and informative part of the traveling group.  Dan spends time looking up the history of the cars in the series, something that makes a great addition to the MVVDMS when they race at any track. 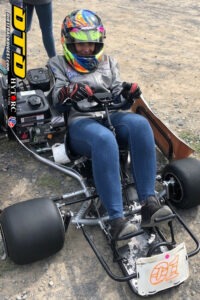 Maybe he has found his place in local racing and we wish him well.

Also while at Dodge City we were surprised to see a new racer in a beautifully prepared kart, Amy Walton-Chavis was about to race in her second race and said she was a bit nervous.  She said husband, Matt, was the one that encouraged her to try it.  Amy did well against some much more experienced drivers and seemed to hold her own.  She knew when to let off before becoming involved in a tangle.

Next we spotted a long time sponsor, Robert Albreada, who was there to crew for his son, A. J. a SR Slingshot competitor that we’ve also seen at Glen Ridge.  A. J. raced a partial season at Glen Ridge (8 out of 17) shows and had one win, four top fives, and six top tens and finished 12th in points.  The night previous to coming to Dodge City,  A. J.  won at Oakland Valley Race Park in Cuddebackville, NY.  Looks as though A. J. has a great future in our sport.

His father said he feels good about the Slingshots because they have a fully contained seat and the driver is able to wear a Hans device.  It seems like a great division for beginners.

As we travel to the new home of SDW we travel with heavy hearts for those that will not be in attendance and we’ve lost many in the past few years.  Our brother, Rich for one, will not make it.  Rich had made every one of the SDW events from the NYS Fairgrounds to Oswego until his death in 2020.  He will be watching the 50th running from a higher seat. 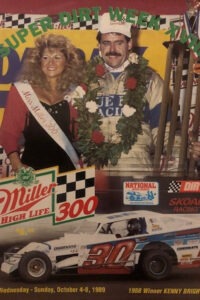 Who would have ever thought that the brainchild of Glenn Donnelly would still be here 51 years later. (SDW was not held in 2020)  Ed remembers his first, 1974, he went down to Lebanon Valley and bought a ticket from Howie Commander.

In the early days Fonda Speedway ran bus trips to the fairgrounds for SDW.  There is no way to explain all the history of this event.

The 1972 SDW listed a drivers’ roster of 104.  The fastest time was set by Kenny Brightbill, with a time of 38.359.  Kenny had also won the Labor Day race at the fairgrounds that year.  When he won the pole he had been racing for three years and had 20 wins.  Kenny Brightbill’s career shows 443 wins in all divisions but he had to wait until 1988 to win the 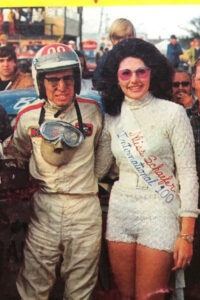 The winner of the very first Schaefer 100 was ZephyrHills, Florida’s Buzzie Reutimann, who started 10th and took the lead in seven laps and never relinquished it.  And Buzzie is still racing and winning.  At the age of 81, Buzzie Reutimann won a race at Volusia Speedway Park in Florida in August. We spoke once with Buzzie about his age and the fact that he was still racing and his answer was, “The car doesn’t know how old you are.”

We are looking forward to one fun-filled week at Oswego. 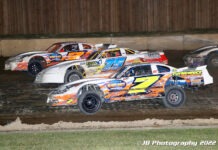 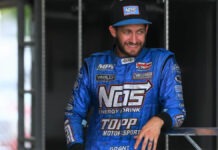