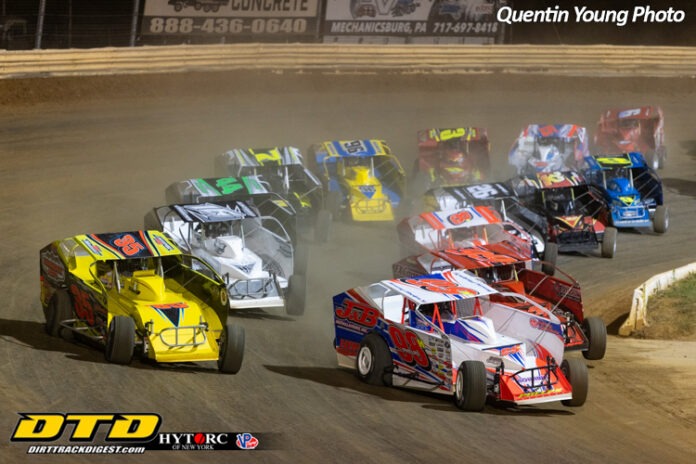 When Jimmy Phelps pulled the HBR racing rig into Port Royal Speedway on Thursday, it was the first time that the Baldwinsville, N.Y., driver had ever been to the Speed Palace. When the checkered flag flew on Saturday night, Phelps found himself with a third-place podium finish behind Matt Sheppard and Stewart Friesen. 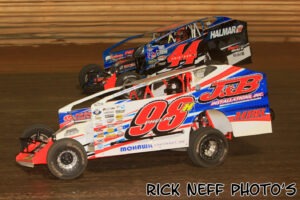 Phelps took advantage of a good pill draw on Friday night to win one his qualifying race thus putting him into Saturday’s redraw for a top 10 starting spot in the Speed Showcase 75 lap feature race. Once again Phelp’s good pill drawing skill continued as he picked the number one starting spot. Phelps led the first 32 laps of the feature race until a hard charging Friesen sailed by on the outside. Phelps ran second to Friesen until Sheppard went by him on 64 and at the end of the race found himself with a very satisfying third.

“All and all, I think we had a pretty balanced car all weekend,” said Phelps after the race. “We ran some harder tires last night to see if they would work so going with hard tires was our plan. Honestly, we are tickled to have run this good. We sniffed the win there for a little bit.  Obviously, we are a little disappointed that we weren’t better at the end when it counted. So hopefully we took some good notes for when we come back next year.”

Phelps had high praise for the Port Royal track and the way it raced.

“This place is unbelievable,” mentioned Phelps. “It is everything that everyone said it was before we came here. It’s just a really cool racetrack and it got even better when it got slippery, and you could run all over it. That was a lot of fun!”

While both Friesen and Sheppard used the outside to get the front, Phelps kept his line the same throughout the race using the middle to the inside of the track.

“I felt more comfortable running the middle,” explained Phelps. “I really didn’t think that until they all started to go by me that it was going to be beneficial for me to go up there and beat the car up. I thought we might catch them, but I wasn’t going to be able to pass them running the same lane. At that point I thought it was best to settle in and hope he would wear his right rear tire out and I would be faster at the end. That theory might have worked if it ended up being a two-dog fight, but then all of a sudden Sheppard popped his nose in there, so it got more interesting. It really that isn’t my bag running it up against the wall. Stewart (Friesen) does it well, but I thought my best shot was to stay in the middle.”

Not only was Phelps racing at a track he had never raced on, but he also had to bolt American Racer tires on the No. 98H instead of the Hoosier tires he is more accustomed to racing.

“We don’t race these American Racer tires hardly at all and I have to give a shoutout to one of my crewmen, Brandon (Ford),” commented Phelps. “He did a bunch of this stuff at the shop and it helped us make some decisions when it came to the tires. Once we got past halfway, our cuts were disappearing, and the car started to free up on me some.  We will write it down and come back at them next time with some changes.” 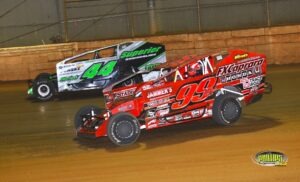 Anthony Perrego backed up his runner-up finish in the last Short Track Super Series Elite with a solid fourth-place finish at Port Royal. Perrego came across the line in fifth place but was elevated up a spot when Larry Wight was disqualified for being too light after the race.

“We were really good early in the race and it seemed like we had a pretty decent piece,” said Perrego afterwards. “We were content riding second there, then that yellow came out and the tires didn’t fire off like they should’ve, and we fell back to fourth.”

In the last part of the race, Perrego battled hard with Wight and Ryan Godown thrilling the crowd. 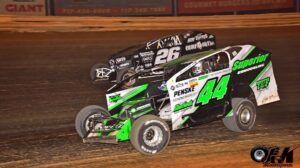 “That was fun battling with Godown and Larry there,” Perrego mentioned. “Me and Larry actually had a hell of a race, unfortunately it was way behind those other three, but that was a lot of fun. We had got up to second there and I thought I had something for Jimmy (Phelps), then Stew (Friesen) went around me and then after that the tires started to go away and then they were gone not too long after that.

“Towards the end when Matt (Sheppard) got by me and we restarted fourth, I kind of felt good on the outside, and for a lap you could ride out there, but then the tires went away. All in all, it was a good run for the Brian Smith owned team. We got a second at Fonda, a fourth here and hopefully we can end this Elite Series with a good run at Georgetown in a couple of weeks.”

When Alex Yankowski crossed the start finish line to take the checkered flag, it was assumed he finished in the sixth position.  With Wight coming up light on the scales, Yankowski was awarded the fifth spot. 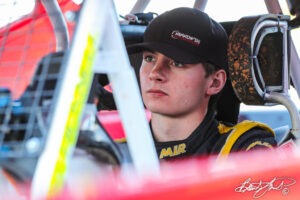 “I was surprised we got fifth there after Larry was light,” said Yankowski. “It was a lot of hard work to get that finish. We made a lot of big changes this week. I am happy with where we finished.  Kevin Bates and Ryan Schane did a helluva job on the tires and the guys at the shop. The car was good, and we had speed all weekend.”

Yankowski, still a teenager himself, ran with the best of the best in Modified racing all weekend long and the kid looks right at home among them.

“To run good here with the competition that was here is quite an accomplishment,” mentioned Yankowski. “This was a new frame for this race. It felt really good to build a new car, we haven’t had a new car in quite a while so hats off to everyone for getting the car done. I have to thank the Friesen’s for all of their help with the set-up stuff or just having us hangout at the camper with them. They are great people and are good to me, but I am really just proud of our whole team effort.”

Yankowski started the race in the 15th spot and worked his way steadily up the running order finding himself in the top 10 with 35 laps to go.

“Starting 15th, I knew we had to go early and try and get some spots,” explained Yankowski. “But then I got a little nervous and didn’t want to push it too much and use up my tires. I think some guys did and dropped like an anchor in the last 20 to 25 laps. This is a tough race. You have to be on it but at the same time you don’t want to push it too hard and use up your stuff.”