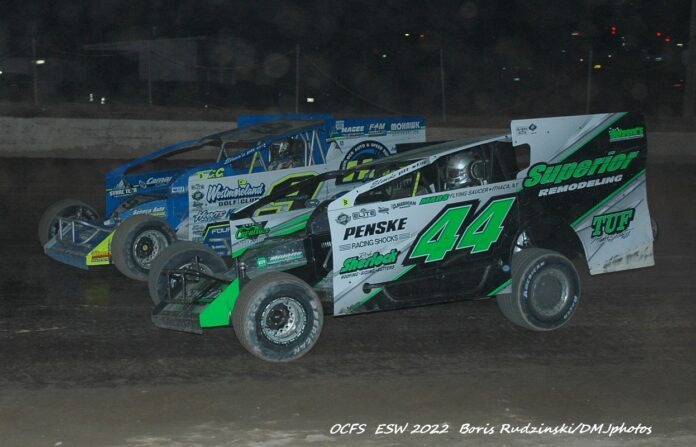 Last night’s STSS Hard Clay Finale looked to end like most other races have ended this October and that is with Matt Sheppard standing in victory lane with the trophy. Sheppard redrew spot number three to start the 50-lap feature and by the completion of lap one was already in the lead and pulling away. Anthony Perrego who started in the 10th spot was quietly making a charge through the field and wrestled second away Marc Johnson on lap 30.

Sheppard had built up a big lead at this point but Perrego had a car that could contend with Super Matt and just needed the race to break his way. The break Perrego received was in the way of lapped traffic. With the track starting to become bottom dominant, Sheppard was having a hard time getting around the lapped car No. 5L of Charlie Loiodice and Perrego was able to close the gap quickly on the No. 9S. Sheppard went to the high side to try and pass the lapped car in turns three and four with Perrego staying down low and being able to take the lead away as lap 41 was scored. Sheppard charged back into turn one looking to take the lead back, but the yellow flag flew with Perrego now your new leader.

When racing resumed, Perrego was able to keep his good friend Sheppard behind for the remaining nine laps to score the big $10,000 win aboard the Brian Smith No. 44.

“It was a tough race there in the beginning, we had to do a lot of digging and clawing to get up to the front,” said Perrego in victory lane after his big win. “I could get up to someone quickly, but it took me a long time to pass them. I got by some of them guys then made a couple of mistakes, and they got me back. When that one yellow came out, I was up to fourth and I thought I took off good behind Matt (Sheppard) but I was still stuck behind Marc (Johnson) and didn’t get a run down in turns one and two and Marc still stuck there with me and finally I was able to dispose of him off of two.”

“Once I got to second, I thought Matt (Sheppard) was gone honestly. Then when we got to traffic, I could see him and thought damn, I think we got a shot at this. My car was pretty good on the bottom, and I was able to use that to my advantage to sneak by him after he was caught behind the No. 5L car.”

With Sheppard stuck behind the lapped car, Perrego was quickly on his bumper and when Sheppard made a move to the outside to make the pass. Perrego was right there to take the lead away.

“That No. 5L car was running a weird line and Matt didn’t know where to go with him,” as Perrego explained his winning move. “Matt tried to go around but at that time I think the bottom of (turn) two was better and I think the top had just burned off at that point and we were able to sneak by him right before that yellow came out.”

With Sheppard starting where he did in third and Perrego starting from tenth, Perrego knew it was going to be an uphill battle to beat Sheppard who has been virtually unbeatable the past month.

“We always come to these races thinking we can win but Matt has been so damn good lately,” commented Perrego. “Then he draws good, so you know it’s going to be tough. He led it there for a long time, but I’ll tell you what, the lapped traffic made a race of it, and I am just glad I was able to take advantage of it. The track was great tonight especially with all of the racing that was on it today. Jeremy (Corcoran) did a great job all day for us to have a track like we did tonight. You couldn’t ask for a better track to race on.”

Perrego has driven for Brian Smith for many years and the team struggled out of the gate this season with a plethora of motor struggles. This was a big win for Smith and the No 44 team.

“This was a big win for Brian and the team, we struggled earlier today with our big block in time trials,” Perrego mentioned. “We did get better in the heat so that is good. This car here, I just scaled it and stuck with what we had, didn’t change a thing. It was good in the heat and I thought man, we have a good car tonight. I am really happy for Brian and everyone who helps us out. I think we have been second in the race for like three years in a row, so it feels good to finally win one.”

It was a very unusual spot for Matt Sheppard to be in after the finish of last night’s Hard Clay Finale. Unless you are just climbing out from under a rock, you know just how good Sheppard has been in the past month to six weeks winning almost every race he has been in.

Last night, it looked like it was going to be another win added to the year’s total until a lapped car turned the tables on Sheppard allowing Perrego to go by and take the win.

“It was a good run for us tonight, the car wasn’t terrible, and it wasn’t great,” commented Sheppard after the race. “I thought me, and Anthony were pretty equal tonight. We had a pretty easy time getting through lapped traffic there until we came up on that No. 5L car and he was all over the place. I don’t know what he was thinking but I know he was all over the place and taking up a lot of real estate for a lapped car.

Going into the Hard Clay Finale, Sheppard only had to start the race to clinch the STSS North Series Championship. Finishing second was the exclamation point for Sheppard in winning the season-long battle.

“We had a nice lead in the North Series coming into tonight,” mentioned Sheppard. “We had a good year in this series, some wins and a lot of good finishes and have been strong all year. We would have liked to finish it off with the way we started it in victory lane here in the spring. But second is a good finish and it just adds another notch to our belt for this season.”

For a driver who doesn’t run American Racer tires very often, Marc Johnson drove a strong race to finish in the third spot. Starting on the pole, Johnson was never able to lead a lap as Sheppard took the lead on lap one, but Johnson ran strong and kept Sheppard within his sights, running in second until Perrego was able to get by him on lap 30. All in all, it was a good run for the Capital District driver.

“We don’t run this series too often, so this was a good run for us,” said Johnson. “I think we finished fourth the last time we ran with them at Fonda, so we were able to keep that going. I was really happy with the car; the guys gave me a good piece and hopefully we can keep the momentum rolling into tomorrow and Sunday. The two guys who finished in front of me tonight roll pretty good here and I am very happy to be on the podium with both of them.