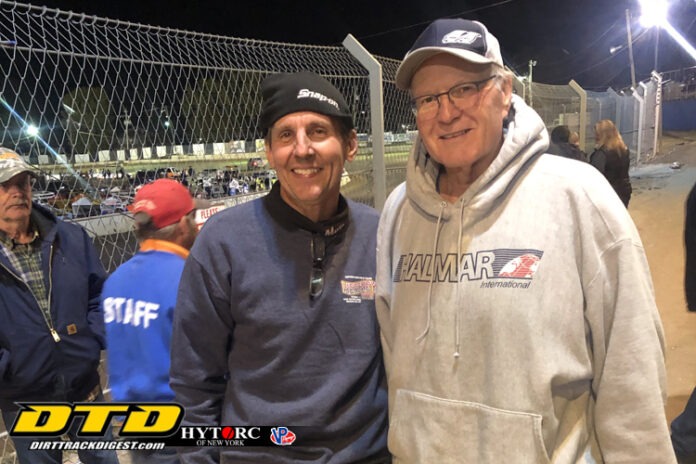 The 61st edition of Eastern States Weekend is in the books and Matt Sheppard continued his dominance in the season finale events.  With his win on Sunday in the Eastern States 200 he now has 41 wins on the season for the second time in his career.  The Modified chauffeur from Savannah, NY also recorded 41 wins in the 2017 season. 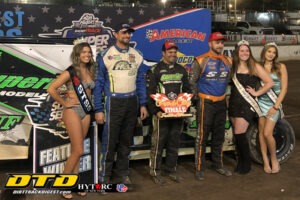 Sheppard lost a motor during the former champions race on Friday night and spent all of Saturday night after the 358-Mod race in Anthony Perrego’s garage changing the motor for Sunday’s event.

Anthony Perrego of Wallkill took home the win in the Short Track Super Series 50-lap race on Friday night, passing both Marc Johnson of Guilderland and Sheppard who was leading the event to take the checker.  Sheppard was second and Johnson finished third.  Matt Sheppard was crowned the STSS Northern Champion and presented with a check for $15,000. 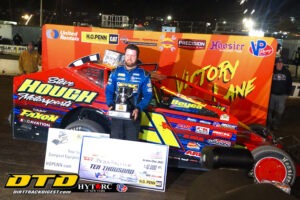 Marc Johnson from Guilderland certainly proved he belonged in the big pool this past weekend, two podium finishes and coming back after a flat tire to finish tenth in Sunday’s Eastern States 200.  Johnson is a local racer that has done well in his career with predominantly his own equipment.  After making his home at Lebanon Valley the past few years he picked up a ride in one of Kevin Starchak’s potent Modifieds and has been showing his racing prowess ever since. 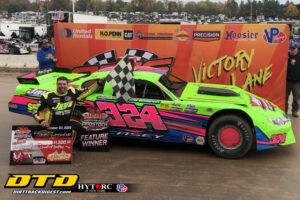 A few years ago the Orange County Fair Speedway seemed to have a new lease on life when a gentleman named Chris Larsen came on board to rebuild a speedway nearing its 100-year anniversary.  The improvements were unbelievable; all new seating along the entire front stretch, the rest rooms on the fan side became a showcase.  Track improvements proved to be a tough chore but Chris continued to do everything possible to improve the 100-year old track surface.  It’s changed so much and it’s been tough coming up with a consistent surface.  The track this weekend was very racy and smooth.

At this weekend’s event Promoter, Jeremie Corcoran announced to all in attendance and those watching on DTDTV, that no matter what was being said in the rumor mill and on social media the OCFS would be in operation in 2023.  Great news, it looks like we will have another year of the grand old speedway. 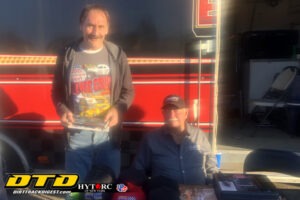 In between the racing and meeting long time friends we found ourselves watching the documentary on Gary Balough, “A Checkered Past”.  We enjoyed the film so much last year we decided to watch it another time.

For anyone involved with addiction and recovery this is something that belongs out there so many of our young people can see what can happen when your desire to win in the top level league takes over.  It cannot only harm you and others but it could be a life or death matter.

After viewing the film, we stopped by where Gary Balough was signing the book about his life “Hot Shoe, A Checkered Past”  At the book signing we spoke with Jim Boyd of Middletown who said he has been coming to the Middletown oval since 1957 and had witnessed Gary Balough and his racing many times but had never met him and we both wondered what could have been for this talented driver. 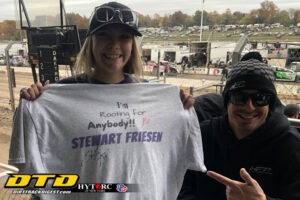 the fans to have signed during the autograph session.  This year’s poster was of program covers from previous Eastern States events.  It was a great fit for the fans and the drivers.

At the autograph signing, we spotted a young lady that was having a tee shirt signed by Stewart Friesen for her grandfather.  Surprisingly it was not a Stewart Friesen tee shirt, it was an “Anyone But Stewart Friesen” shirt and Stewart encouraged her to make sure it was shown in the photo.

The booths above the covered grandstand seating each honor one of OCFS’s great drivers.  On Saturday night the driver being honored with a sign was Tim Hindley.  Tim and his family were brought to the front stretch and presented with the sign that will be mounted on the Tim Hindley booth.  Tim’s record at OCFS shows he raced in Modified, 358-Mods and Sportsman adding up to 61 wins and five titles.

We spoke with Tim on Saturday and he said when he decided to quit racing he sold everything, making sure it was over for him. 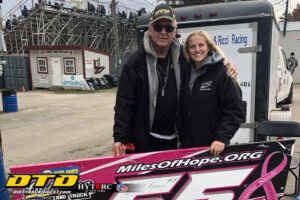 Ed’s luck in 50/50’s and raffles continued at Eastern States when he won the Allison Ricci car side panel in a raffle the Ricci family was running for a breast cancer charity.  We have seen several members of the Ricci family race for many years dating back to Allison’s grandfather, Rich Ricci, Sr., before her father Rich Ricci, Jr., took the wheel to race with her Uncle Mike and continue the Racing Ricci tradition.

I know some may think it’s too early to think about Christmas but Lew Boyd has his Coastal 181 list of Reading for Racers out.  Check out the website and order early to make sure you get what you want.