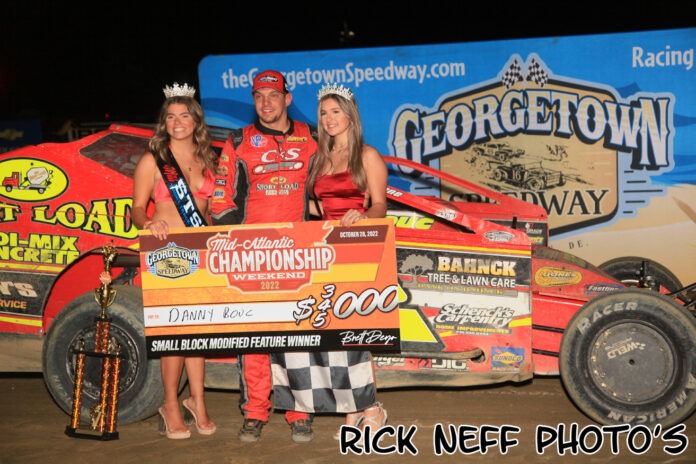 Plumsteadville, PA driver Danny Bouc continued his hot streak during the Friday small block portion of the Mid-Atlantic Championship weekend at Georgetown Speedway to take his third victory in a row. Bouc, who won last Saturday at New Egypt Speedway and Thursday night at Georgetown in the running of the Camp Barnes Benefit modified race, continued his late season hot streak.

“Three in a row, we’ll take it for sure,” said Bouc after his No. 32 went through post-race tech. “Qualifying for tomorrow’s race was a little rough tonight but this makes up for it”

Matt Stangle grabbed the early lead in the race and looked like he was the man to beat but the tough luck for Stangle continued on the night when his No. 6 went up in smoke after 10 laps were in the books. For Stangle, this was the team’s second engine problem of the night after having motor issues in his STSS qualifying race.

Stangle’s misfortunes put Bouc in the lead at this point and once in front, he led the remainder of the race holding off first a hard charging No. 51 the Jordan Watson and then Jeff Strunk to take his second checkered flag in as many days here at Georgetown.

“I am not sure if I would have been able to pass him or not, but I thought I would be able to get to him,” explained Bouc. “Sometimes it is just better to be lucky than good and lately luck has been falling our way which is about time after all of the bad luck we have had here.”

Late in the race, Jordan Watson and Jeff Strunk both tried to get by Bouc on the inside, but Bouc was able to hold his line coming off the corners and stay in front.

“The biggest thing here, especially with these spec motors is that you have to keep your speed up,” Bouc mentioned. “I tried to do the same thing I did last night in blocking their line. These spec cars have no speed, so everyone is going the same speed and you are not going to be able to check out. It’s tough but I got the lead pretty quick there and kind of got around them guys. We were lucky with a good pill draw tonight so that helps but we’ll take it and try to keep it rolling.”

Jeff Strunk raced his way to another second-place finish after a late race pass of Jordan Watson and just like on Thursday night Strunk tried to make a run at leader Danny Bouc but came short of making the winning pass.

“Yeah, I am the first loser again, second sucks,” joked Strunk in the team’s hauler after the race. “We have had a lot of seconds this year, I think it has been at least 15 and if you take half of them and turn them into wins we have over 10 wins.”

“All of that aside, we were good tonight. I am not sure we had enough to beat Danny, he was good tonight. I think if we would have a front row restart, we might have been able to do something, but we didn’t. Danny (Bouc) is confident right now and is on a roll so finishing second to him isn’t bad, but we want to win. I just didn’t have enough drive off to make a good run on him, but we cannot complain with two seconds for the weekend so far. Hopefully we can have another good run tomorrow.”

Jordan Watson gets third in the Danny Pizza Pizzaz No. 51

In only his second race aboard the Dan Sommeling No. 51, Jordan Watson drove it to a podium finish. Watson made his way through the field and was up to second before Jeff Strunk passed him late.

“It was our second week in the car, we made some adjustments to make it better,” said Watson. “I appreciate the opportunity that Danny, Bob and Billy are giving me. They let me come out and have a little fun tonight and are a great bunch of guys to work with.”

Once Watson made his way to second, it looked like he might have had something for Bouc until a Strunk passed him late.

“I feel like our right front gave up there with about eight laps to go,” explained Watson. “I thought I had a decent shot at him after I found something coming off of (turn) two but then it got to the point that I couldn’t navigate the corner the way I wanted to. I just couldn’t cut the corner off like I had been doing. We’ll take a third-place finish for our second night out. I think we can still do a couple more things to get comfortable with it and get to know each other a little better and have some fun. Hopefully I can be the lucky guy that gets to drive this car next year and we can work hard this winter to try and get everybody on the same page and go racing.”