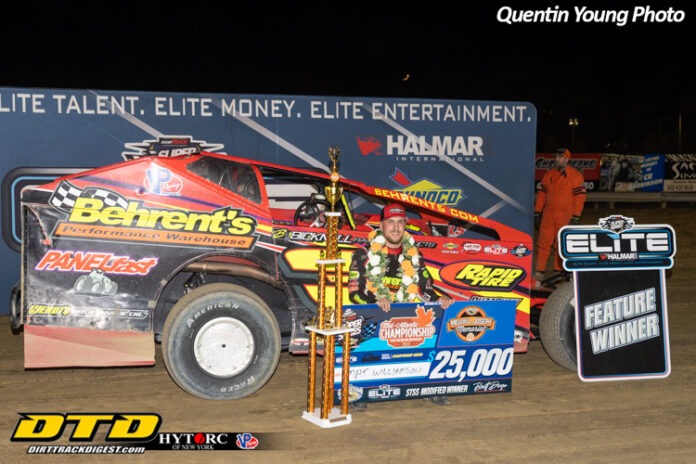 Mat Williamson has had a year most drivers would only hope for, except if you are named Matt Sheppard. Williamson has stood in victory lanes on 26 occasions in 2022 and is the point champion at the Ransomville Speedway. But unlike the past few years, Williamson has not had that signature big money win. Fret no more folks, Williamson came through in a big way on Saturday night winning the $25,000 Melvin R. Joseph Short Track Super Series Elite Race at the Georgetown Speedway.

For Williamson, it felt good to get the monkey of his back and score a major win.

“This is great, I didn’t want to go a year without winning something big,” commented Williamson in the team’s trailer after his win. “Obviously, we have a trying year. It has been tough on everyone, especially Jeff (Behrent and Harry (Behrent). We have had some races where we have been really bad and other races where I thought we were really good, and everyone thought different. To get a big win for Jeff and Harry means a lot.” 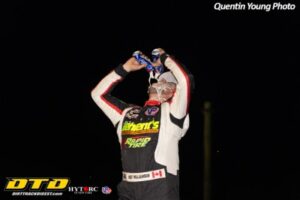 Before Thursday night’s Camp Barnes Benefit race, Williamson had never made a lap around the Georgetown Speedway and Thursday night did not go as planned with Williamson and team struggling only managing a 17th place finish in the 30-lap feature event. The team went to work, and Friday’s qualifying race found Williamson finish in the third spot to lock himself into the redraw for Saturday nights big main event.

“Thursday was a tough one, but it was good that we ran it to get some laps on the track,” explained Williamson. “Friday night was much better, and we were able to lock ourselves into a redraw spot after a bad draw.”

The race itself saw Williamson starting on the outside of polesitter Mike Mahaney. Mahaney got the quick jump on Williamson but could never get away as Williamson hung right with him. Lap ten saw Williamson go by Mahaney to take the lead but a restart on lap 12 saw Mahaney regain the top spot. Two laps later the yellow was out again and this time Williamson repaid the favor to retake the lead over Mahaney. After another restart on lap 23, Mahaney once again went to the inside to steal the lead away from Williamson. At this point Friesen also made a move to go past Williamson to takeover the second spot but two laps later Williamson was back around Friesen for the spot. The deciding move of the race was on lap 38 restart as Mahaney went to block Williamson from going around the outside, Williamson changed his line and went by on the inside to move to the lead and this time it was for good.

“Battling with Mike (Mahaney) was fun,” mentioned Williamson. “It was good racing for the fans, it was just good hard racing. Nobody touched, we didn’t make contact or run each other off the track. It was entertaining for sure. I wanted to pick the top on the restart, he wanted to pick the bottom. It was tough, you didn’t know where to be. He slid me the one time he got the lead and I had to lift to avoid contact then I did the same to him on the following restart. That’s the stuff you have to do when the track is so fast around the top.”

A restart with six laps to go found Williamson lining up alongside of the No. 9S of Matt Sheppard. It has been well documented how good Sheppard has been especially in these big money races. Williamson knew he had a big task in front of him to stay in the lead.

“That was tough, you have the caution come out with six laps to go,” explained Williamson. “I am in the car cursing because if it would have been one more lap and it would’ve been a single file restart and then you look alongside of you and you see the No. 9S and obviously everybody knows the season he has been having so now you know you have to give 110 % because if you only give 100%, he will get by you. I was able to get the jump on him and stay out front. I slid the right rear with two to go getting into (turn) three and I knew if I did that again he would go right by me, but I was able to keep it in the brown the last few corners and stayed out front.”

“I thought the track raced pretty cool, I was able to get by Mike (Mahaney) on the bottom, commented Williamson. “If you had a good car, you could race all over it. If I didn’t race here on Thursday I would be one for one here! But obviously racing on Thursday helped us get ready for tonight. It is pretty cool to be the last driver to win on this layout.”